When it comes to finding a new office, there are many choices for businesses, providing they want to be in Phoenix, Scottsdale or the East Valley.

The East Valley has dominated for years in office construction and leasing, landing big insurance and professional services companies just during the past couple years. At the same time, the West Valley — or pretty much anything west of Interstate 17 — has battled misperceptions that have dogged it for years of an area dominated by retirement communities, inferior schools and a lack of suitable employees.

“We still fight the old perceptions,” said Sintra Hoffman, president and CEO of Westmarc, the West Valley’s economic development advocacy organization. “There is construction of spec manufacturing buildings here, and those buildings are built and immediately filled. Somebody had to pioneer manufacturing here, and we are trying to pitch that same argument with office.”

According to research done by Westmarc and CBRE, 69% of the West Valley’s workforce commutes east for work. While 34% of the Valley’s advanced business services workers live in the West Valley, only 11% of those jobs are located there. Westmarc defines the West Valley as anywhere west of Interstate 17, including portions of the city of Phoenix. The West Valley has a population of roughly 1.6 million people. 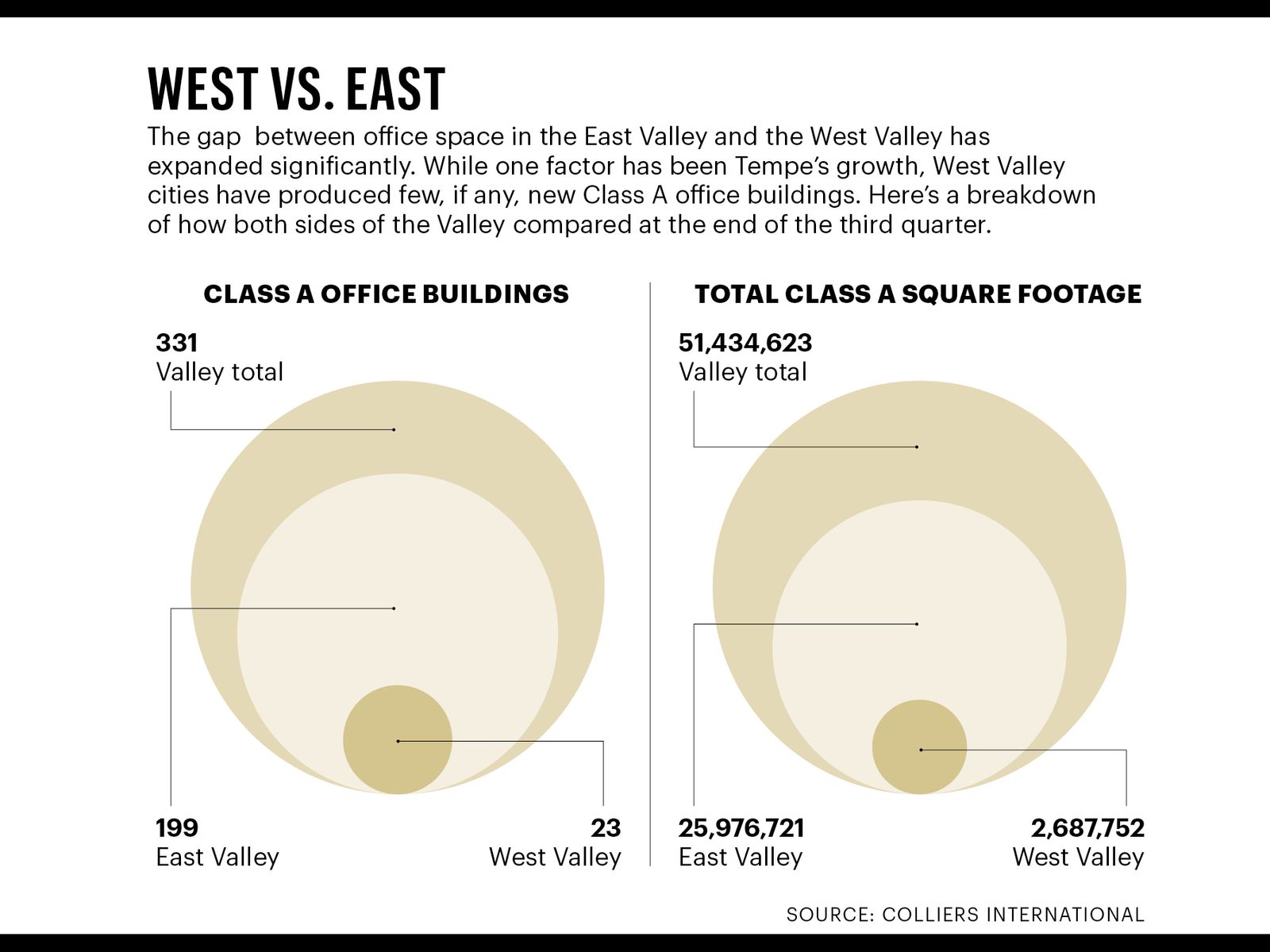 It could represent untapped potential for a developer willing to take a risk, West Valley leaders say.

“I look at it as an opportunity,” Hoffman said. “Companies are missing the boat to have the workforce here. The issue we are challenged with is we don’t have the [office] product. Companies today want to come in and have the building already there, and that’s what we don’t have.”

Office construction has concentrated heavily in the East Valley — especially in Tempe and Chandler — so companies often do not even stop in the West Valley to tour for office space, Hoffman said.

“Since we don’t have the physical product in place, the West Valley isn’t getting the looks that it should,” Hoffman said.

Such was the case last year when a major business services provider that stood to create thousands of jobs was looking closely at the West Valley. A source close to the deal said the company wanted office space to be ready long before something of an appropriate size would be built in the West Valley. That company ended up locating in the southeast Valley.

But the perception of lack of accessible office space in the West Valley may be changing. Earlier this year, the city of Goodyear and Globe Corp. announced plans for a public-private partnership that would develop 47 acres owned by Globe near 150th Drive and McDowell Road. The project’s first phase will include a 120,000-square-foot building housing the Goodyear City Hall and city departments, a 2-acre public park and 100,000 square feet of speculative Class A office space.