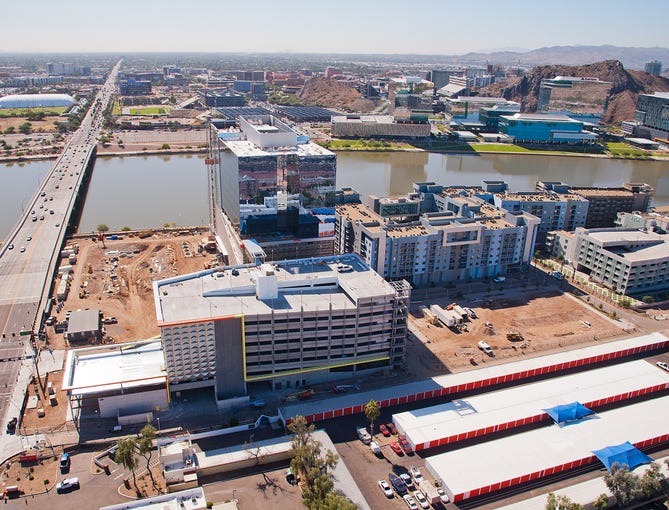 Office complexes, hotels, condos and apartments have sprouted around Tempe Town Lake since it opened in November 1999.

A dozen or so developments sprawl across multiple buildings and 13.8 million square-feet.

Another three projects that will eventually add 2.7 million square-feet of development are under construction, according to the city.

Approximately 100 acres of waterfront property and lake-adjacent property are left to be developed.

Here’s a look at projects under construction and planned around Tempe Town Lake.

Watermark Tempe will include offices, apartments and restaurant and retail space on nearly 15 acres off Scottsdale Road just south of Loop 202. 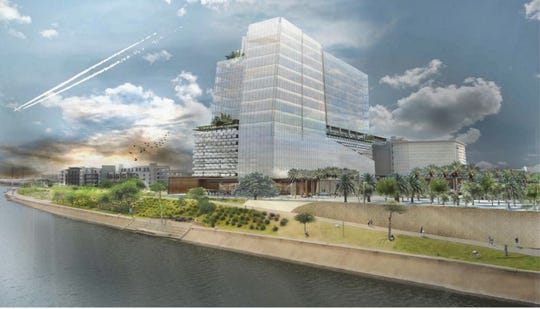 The first phase includes a 16-story office complex that is expected to open in early 2020.

Opendoor, an online service to buy and sell homes, and WeWork, a coworking space, have leased five floors in the building.

A salon, juice bar and gym will open in the retail and restaurant spaces in early 2020, along with a 360-unit apartment complex called Aura Watermark. The apartments already are open, as the amenities are being completed.

A future phase calls for a hotel with 250 rooms.

The Boyer Company is building more than 1 million square feet of office, retail and hotel space on 18 acres of city-owned land along Rio Salado Parkway, immediately west of Tempe Center for the Arts. 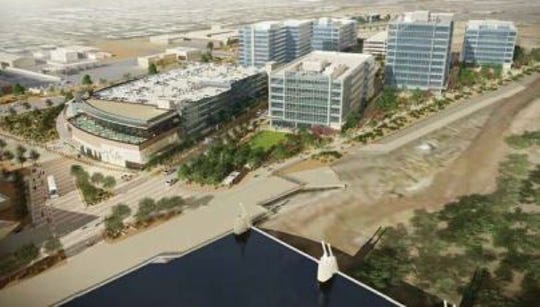 The project’s first phase, an office complex and parking garage, is slated to open in January. Medical technology manufacturer Becton Dickinson will be the first tenant and is expected to employ 650 people on the site.

The Grand at Papago Park

Crews recently completed a nine-story office building and a 300-unit apartment complex should follow early next year at the Grand at Papago Park. 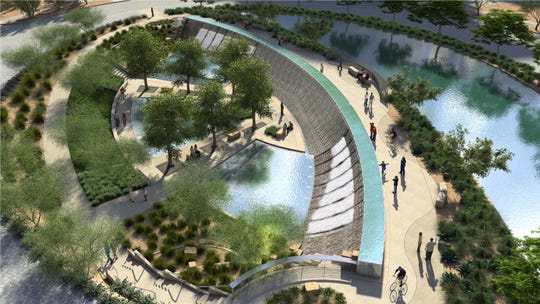 The Grand is the final phase of Papago Park Center, a 350-acre mixed-use business park north of Loop 202 between Priest Drive and Center Parkway. The land is owned by Salt River Project and the master developer is SRP’s real estate arm, Papago Park Center, Inc.

The development is expected to be completed over the next 15 years and include 3.2 million square feet of offices, apartments and retail and be home to roughly 8,000 workers and residents, said Mitchell Rosen, Papago Park Center’s development manager.

Crews relocated the Grand Canal to the center of the development as an amenity for employees in the business park, Rosen said. The canal has an improved multi-use path for walking and biking, benches, lighting and landscaping, he said.

Beyond what is going up, Tempe is in talks with a developer to build offices, housing and a hotel on roughly 11 acres of vacant land on the south side of the lake, east of Rural Road. City leaders expect to ink a development agreement in the next few months.

More offices are planned on the last vacant parcel on Playa del Norte, a street on the north side of the lake.

West of the IDEA campus, nearly 40 acres of city-owned land along the dry Salt River is envisioned as an entertainment district, Kennedy said.

Officials at Arizona State University, which owns about 40 acres of vacant land on the east end of the lake that includes the recently shuttered Karsten Golf Course, expect to see hotels, offices and homes as part of its Novus Innovation Corridor.

Connect Mill Avenue to the lake

City leaders also want to better connect downtown Tempe to the lake by revitalizing a nearly quarter-mile stretch between Tempe Beach Park and the shops and restaurants along Mill Avenue.

Mayor Mark Mitchell refers to the current lack of connectivity as a “broken neck.”

“You have the head, which is the lake, and you have the body, which is Mill Avenue, but you don’t have a neck connecting it,” Mitchell said. “It’s something that we’re continuing to address to provide that connection to draw people to the lake from Mill Avenue.”

Among ways to increase visitor traffic to that area could be the redevelopment of Hayden Flour Mill and the former Monti’s La Casa Vieja, he said.