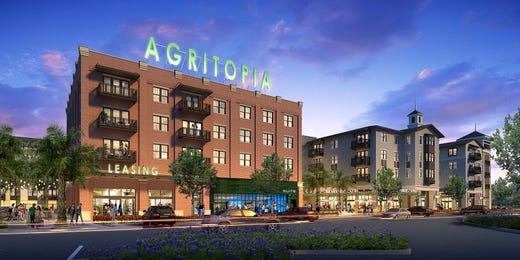 With shovels in the ground and cranes in the air, developers broke ground on Thursday on the final piece of development that will bring more restaurants, apartments, a fitness studio and other retailers to Agritopia, a unique master-planned community in Gilbert.

Agritopia has gained national acclaim for combining its agricultural roots with modern amenities, from an urban farm to trendy restaurants.

The final piece of the community is Epicenter, a high-end residential and retail destination in the downtown core.

Epicenter will feature two, four-story buildings with more than 49,000 square feet of ground-floor retail space and 320 luxury apartments above.

“This corner will be such an incredible part of our community long into the future for the next 100 years and beyond, and the legacy will continue,” Gilbert Mayor Jenn Daniels said, referencing Gilbert’s 2020 centennial year.

Father-son duo Joe and William Johnston, who are behind the creation of Agritopia, led the speeches and dirt-turning.

From Gadzooks to Matt’s Big Breakfast

Epicenter will be the “capstone” project for Agritopia, which sprawls across 166 acres near Higley and Ray roads that was previously the Johnston family farm.

The Johnston family has owned the land for 60 years, with the past 20 years focused on creating Agritopia as “village life for all ages,” Joe Johnston said.

Agritopia has an 11-acre organic farm and homes have low fences, front porches and other features to encourage neighborly living. 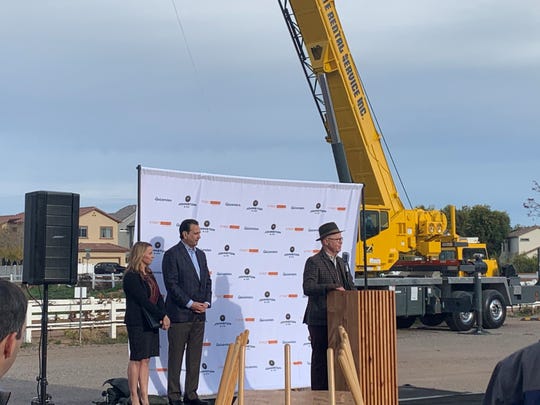 Joe Johnston, local entrepreneur and founder of Johnston and Co., speaks at Epicenter’s groundbreaking in Agritopia on Jan. 9, 2020. To his left are Maricopa County Supervisor Steve Chucri and Gilbert Mayor Jenn Daniels.

Epicenter, which has always been in the plans, will “wrap everything up in a nice bow and create the downtown we wanted for Agritopia,” William Johnston previously told The Arizona Republic.

The development aims to create a “health-focused, walkable environment.”

Among the retailers planning to open in Epicenter are:

Joe Johnston said the retailers are the “best of Arizona operators” that focus on food, health, lifestyle and personal services. 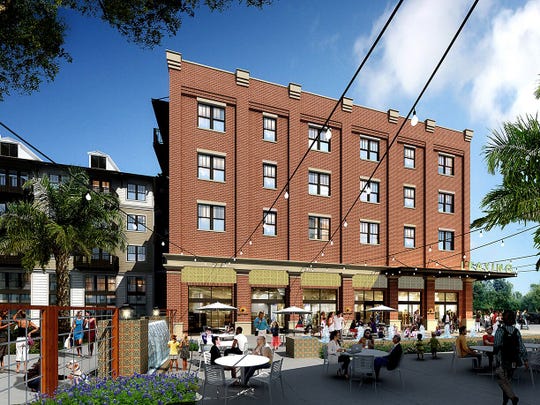 Apartments with makers space for residents

At full capacity, the 320 one-, two- and three-bedroom apartments will house 1,000 residents. Agritopia is home to approximately 1,600 people on 452 lots, not including residents of its assisted living home, according to William Johnston. 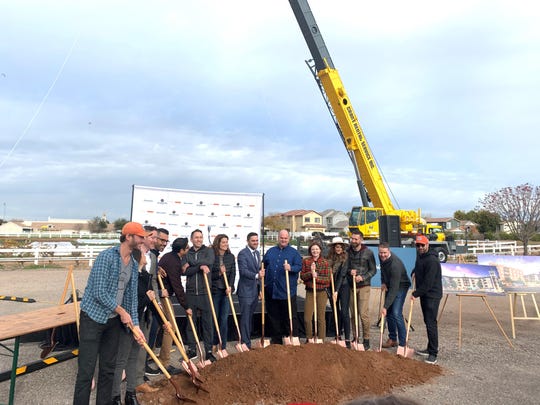 Individuals who have signed leases to live at Epicenter in Agritopia turn dirt at the groundbreaking on Jan. 9, 2020.

Epicenter will offer residents a makers space for woodworking and crafting and a demonstration kitchen. As some of Gilbert’s tallest buildings, the structures will offer sweeping views of San Tan and Superstition mountains.

William Johnston has said the high-end apartments will likely be “some of the most expensive units in the East Valley.”

He envisions them as “more of a permanent residence than transitional.” 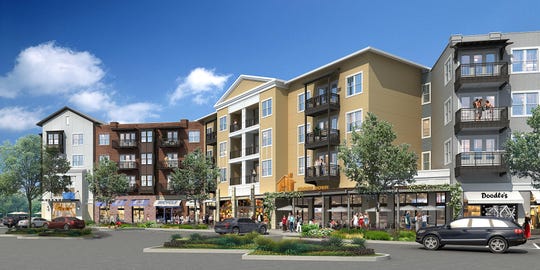 Years in the making

The site has faced significant construction delays. Epicenter was initially slated to break ground in fall 2017 and open in early 2019.

Daniels, at the groundbreaking, joked that she is the fourth Gilbert mayor to work with this project.

“I’m proud to be the mayor that finally was here when we broke ground,” she said.

Epicenter’s first developer backed out just prior to the planned 2017 groundbreaking due to rising costs, William Johnston previously said.

He found a new partner in Dallas-based StreetLights Residential and started over with plans and capital, causing the multiyear delay.

The Gilbert Town Council has been supportive of Epicenter, voting 5-2 to provide $1.3 million in development reimbursements in 2017.

A town-commissioned economic-impact study at the time estimated the project could provide more than 200 jobs and create an $18.5 million annual economic impact.

“I know that the Johnston family spares no vision, no expense to bring the highest quality projects to our community. We’ve been so grateful for all of them and for their efforts,” Daniels said.