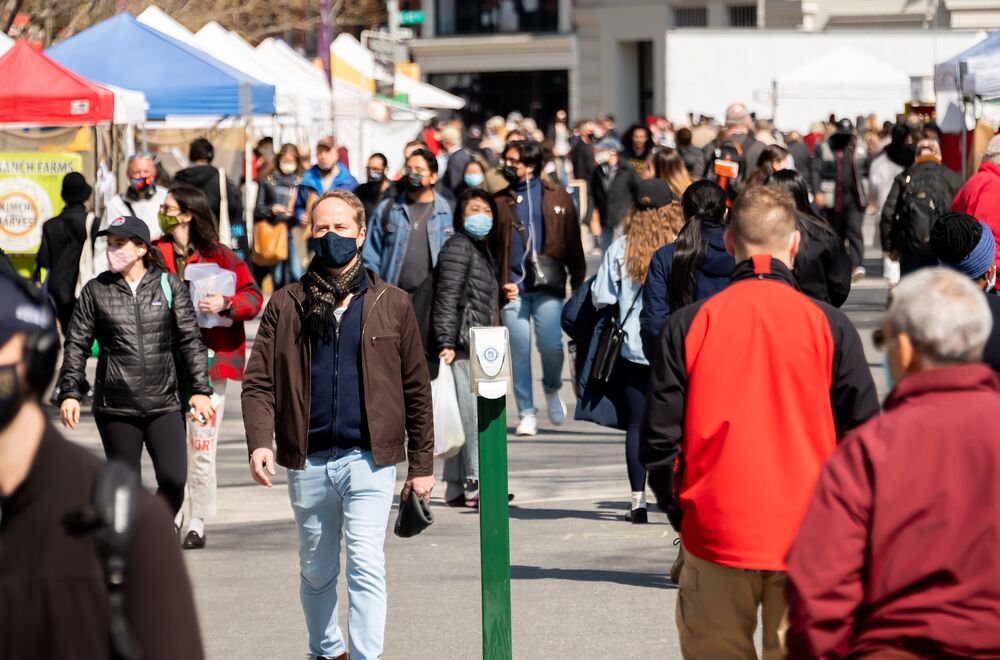 Shoppers are out for vengeance.

A year into a pandemic that’s devastated lives, jobs and the economy, those who are lucky enough to have disposable income are ready to go out and splurge — even if they still have nowhere to go in that stunning dress or those brand new sneakers. Some are calling this “revenge spending.”

U.S. retail sales are near record highs and employment and vaccinations are on the rise. Americans have amassed a massive stockpile of excess savings — Bloomberg Economics estimates it to be about $1.7 trillion since the beginning of the pandemic through January. And that’s about to be bolstered by a new round of stimulus payments. As the economy reopens, consumer spending over the next two quarters is likely to be the strongest such period in at least 70 years with a rebound in services leading the way, according to economists at Wells Fargo & Co.

“A lot of the snapback in spending will come from those more leisure expenditures — your discretionary expenditures,” said Shannon Seery, an economist at Wells Fargo. Those are the areas that “we really expect to bounce back once the economy returns to some semblance of normal.”

Revenge spending was seen as early as last April in China after the government began easing back to normalcy after the nation was the epicenter of the coronavirus pandemic in its early days. The impact on companies was clear: U.S. jeweler Tiffany & Co.’s China sales surged 90% in May from the year prior, while Hermes, the French luxury label known for its $10,000 handbags, raked in $2.7 million in one day from a store reopening in Guangzhou.

China has been recovering ever since, even as the virus continues to rage across Europe and North America. The reopening of the nation’s domestic travel corridors sparked a tourism revival, with locals visiting destinations like Macau and Hainan. They’ve been spending so much there that brands like Ralph Lauren Corp., Estee Lauder Cos. and Coach are all scrambling to open more stores. There’s universal hope that there’ll be a similar fervor in the U.S. too.

While the U.S. economy will likely reopen gradually over the course of 2021, the federal government is already starting to distribute stimulus checks. Research suggests one-time payments boost spending more than steady payments that lead to a higher income.

“This round of stimulus is coming at the same time that the economy is properly reopening,” said Michelle Meyer, head of U.S. economics at Bank of America Corp. “If you have a lot in your bank account already, you don’t have very much debt to pay off, you probably do feel more comfortable spending the stimulus check.”

Even the previous round of $600 stimulus checks, which were less than half the size of the incoming $1,400 payments, helped drive a January spike in discretionary purchases. U.S. retail sales jumped by the most in seven months amid increased spending on clothes, electronics, home furnishings and more. Department stores saw a nearly 21% increase in sales from the prior month.

And there’s room to grow, since sales at many types of stores and restaurants remain below their pre-pandemic levels. While spending has eased from January’s breakneck pace — in large part due to severe winter weather — the new round of direct checks will give fresh support to consumers. The $1,400 payments could give restaurant sales a lift for up to seven weeks, according to an analysis by Bloomberg Intelligence.

It may take slightly longer for the wealthiest to shell out cash like they once did. The top 10% of earners account for nearly half of personal outlays in the U.S., according to calculations by Wells Fargo. These consumers, who have been forced into saving because of social distancing, are likely to come out in full force as the health crisis subsides and herd immunity is reached, Meyer said. Almost half of U.S. consumers, meanwhile, said they’d buy little luxuries in the next six months. Over a third said they’d go in on even bigger, more expensive products, according to a survey from Accenture.

U.S. retailers from discount clothing stores to luxury jewelry boutiques have been waiting for this for months. Signet Jewelers Ltd., owner of Jared and Kay Jewelers, had hoped it’d come in time to bolster Valentine’s Day sales in February. That didn’t work out, but it’s better late than never.

The CEOs of Abercrombie & Fitch Co., Coty Inc. and TJX Cos., which operates TJ Maxx, have each mentioned the prospect of revenge shopping boosting business in the coming months. Poshmark Inc., an online resale marketplace, said sales of summer dresses doubled in February from the previous month. CEO Manish Chandra said it’s an early sign that the population is ready to get out and spend.

“That to me tells us that we are getting ready for something,” said Chandra. “I think we’re all ready for that. America’s definitely ready and the world seems to be ready as well.”

It’s not just retailers — those around the airline industry are referring to “revenge travel.”  United Airlines Holdings Inc. CEO Scott Kirby expects a sustained increase in demand because  “people already bought a new car, did a home repair.” This means “a lot more available to spend in ’22, ’23, ’24 for leisure demand,” he said during a recent event.

Rileigh Christenson, a 23-year-old in Elk Rapids, Michigan, who works in marketing, said she’s extremely ready. She’s committed to taking a dream vacation with her boyfriend after waiting to do something — anything — for the past year. They started putting aside money until they had a few thousand dollars to blow once the virus recedes.

“I randomly saw someone on TikTok who was in Alaska and I was like, ‘You know what? I’m pulling the trigger,’” Christenson said. “It’s happening as soon as it’s safe.”