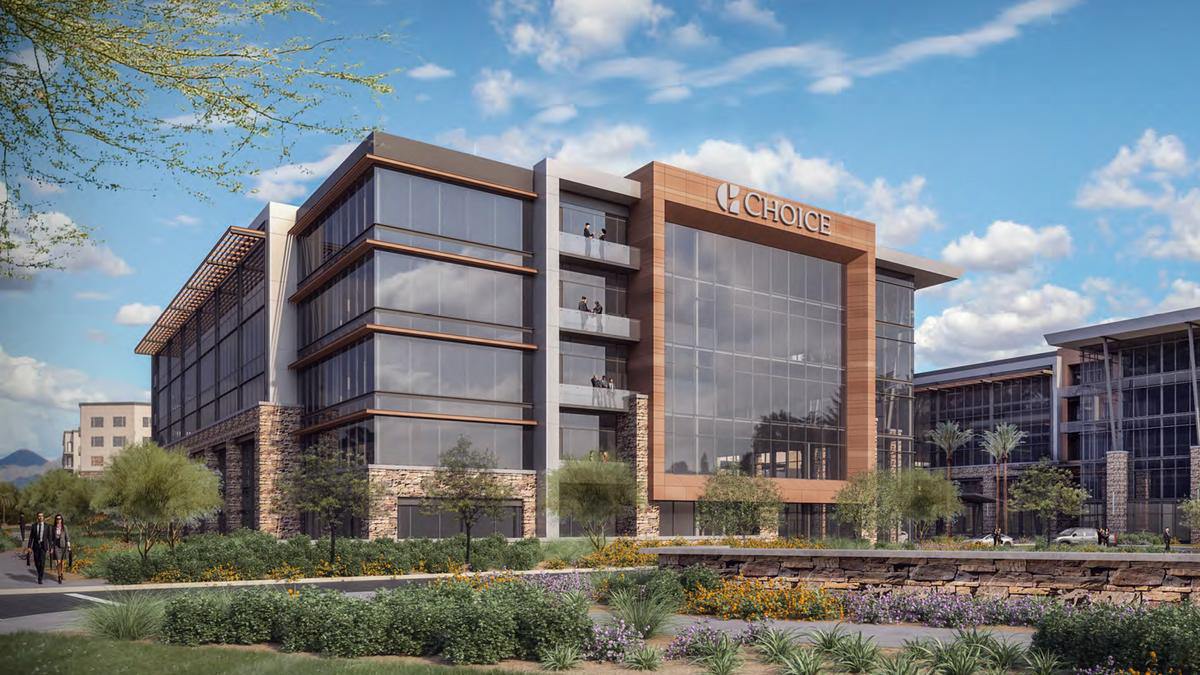 Hospitality chain Choice Hotels International plans to almost double the presence of its technology division in greater Phoenix, becoming the latest tech operation to expand in the biggest city in a state that’s a national leader in surging technology growth.

The technology division of Choice Hotels, which produces the company’s online booking platform, cloud-based reservation system and mobile apps, said it has agreed to fully occupy a five-story building totaling 150,000 square feet at Cavasson, a 134-acre mixed-used project under construction at the northeast corner of Claret Drive and Loop 101 in Scottsdale by developer Nationwide Realty Investors, the real estate division of insurance giant Nationwide Insurance.

Arizona has seen 40% higher technology sector growth than the nation over the past year, with almost 30% of Arizona science, technology, engineering and math graduates staying in the state to work, according to latest Arizona Technology Council Industry Impact Report, a quarterly report by the state’s trade association for science and technology Arizona Technology Council. Since the start of the year, Arizona has added 2,600 technology jobs, which have seen a 5.1% wage increase over the past year, with an average annual salary of over $80,000.

Phoenix is gaining recognition as a growing technology center, with tech firms Microsoft, Google, Apple among the companies building data centers while Amazon, Indeed, ZipRecruiter, Uber in addition to Choice Hotels expand the tech hub by relocating or growing within the region.

The companies, many of which are migrating from California and other tech-driven areas to beat the high cost of talent and real estate, are attracted to the live-work-play communities in Tempe, Chandler, Scottsdale and downtown Phoenix. A significant share of the Phoenix area’s tech jobs are with non-tech companies that have established IT centers such as USAA, Deloitte, General Motors and Charles Schwab, according to CoStar Analytics.

Choice now occupies about 88,000 square feet under a 10-year lease at the North Scottsdale Corporate Center at 6811 E Mayo Blvd. The new facility will allow the company to expand in-house development of technology used the chain’s more than 12,000 hotel owners and millions of customers, Choice Hotels Chief Executive Patrick Pacious said in a statement.

The lease represents the second time in recent months that a company has committed to office space before construction has started, according to CoStar Market Analyst Jessica Morin. San Mateo, California-based employee benefits administration firm WageWorks leased a large chunk of what is expected to be the first building at The Union at Riverview office project planned by developer Lincoln Property Co. and Harvard Investments in Mesa, Arizona.

Rockville, Maryland-based Choice Hotels, one of the world’s largest hotel franchisers with more than 7,000 properties and 570,000 rooms in more than 40 countries, will move into the building when construction, which is scheduled to start before the end of the year, is planned to finish in 2021.

Choice Hotels is the second signed tenant at Cavasson following Nationwide Realty’s parent company Nationwide Insurance, which intends to move into a 460,000-square-foot headquarters. Cavasson is designed to include about 1.8 million square feet of office space, 1,600 apartments, retail, restaurants and other space. The city and developer are funding about $30 million in new roads, sidewalks and other infrastructure, according to Scottsdale city documents.

Momentum from higher office sales volume in 2018 carried over into the first half of this year, with keen interest in Phoenix assets supporting nearly $2.8 billion in transaction volume over the past four quarters ending in June. Phoenix is benefiting as investors shift their focus to secondary markets in search of higher yields and steady cash flows, Morin said.

“These companies want the best quality buildings, and we’re not building office space fast enough because tenants are committing to space before construction even begins,” Morin added.