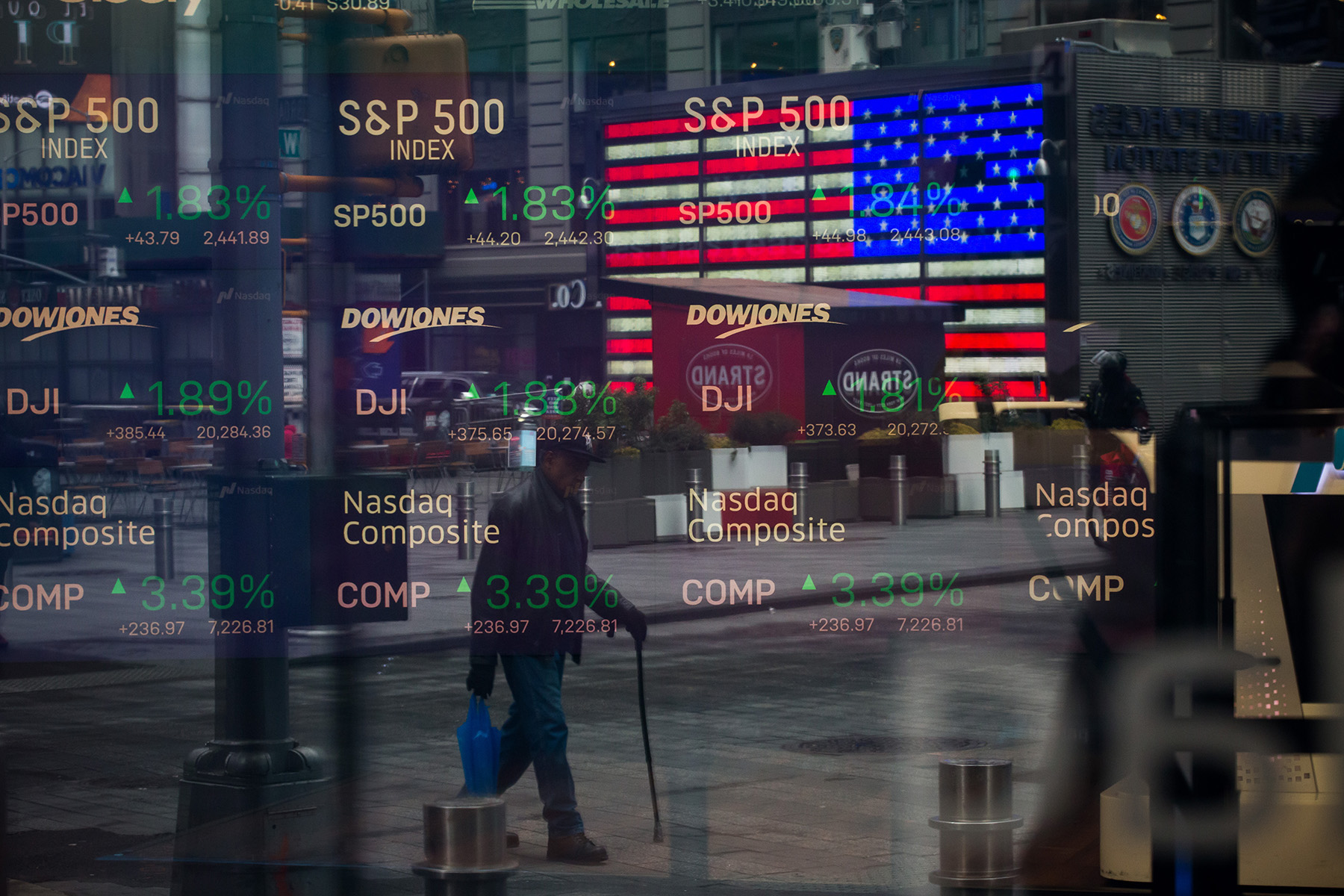 During the longest economic run in U.S. history, the low, slow growth flummoxed economists across the board.

Predictions of an impending recession kept being pushed further away as inflation remained in check and money stayed cheap along with labor and energy.

But none of the predictions seem to have considered that a pandemic would be what ends the economic run. The coronavirus, also known as COVID-19, has spread around the world and brought economies to a standstill, especially in the United States and in New York, its biggest city and financial center.

The reaction has sent the economy hurtling toward a recession. Economists now debate whether the recovery will be quick, like the up and down of a “V,” or slightly more prolonged like a “U” or drawn out like an “L.”

Real estate investors, fund managers, property owners and lenders rated “epidemics” the lowest of their concerns this year among social and political issues important to the real estate industry in the Urban Land Institute’s annual “Emerging Trends in Real Estate” report. ULI puts together the report with global consulting firm PwC, and the 2020 report included responses from about 2,200 real estate professionals in North America who were surveyed in 2019. 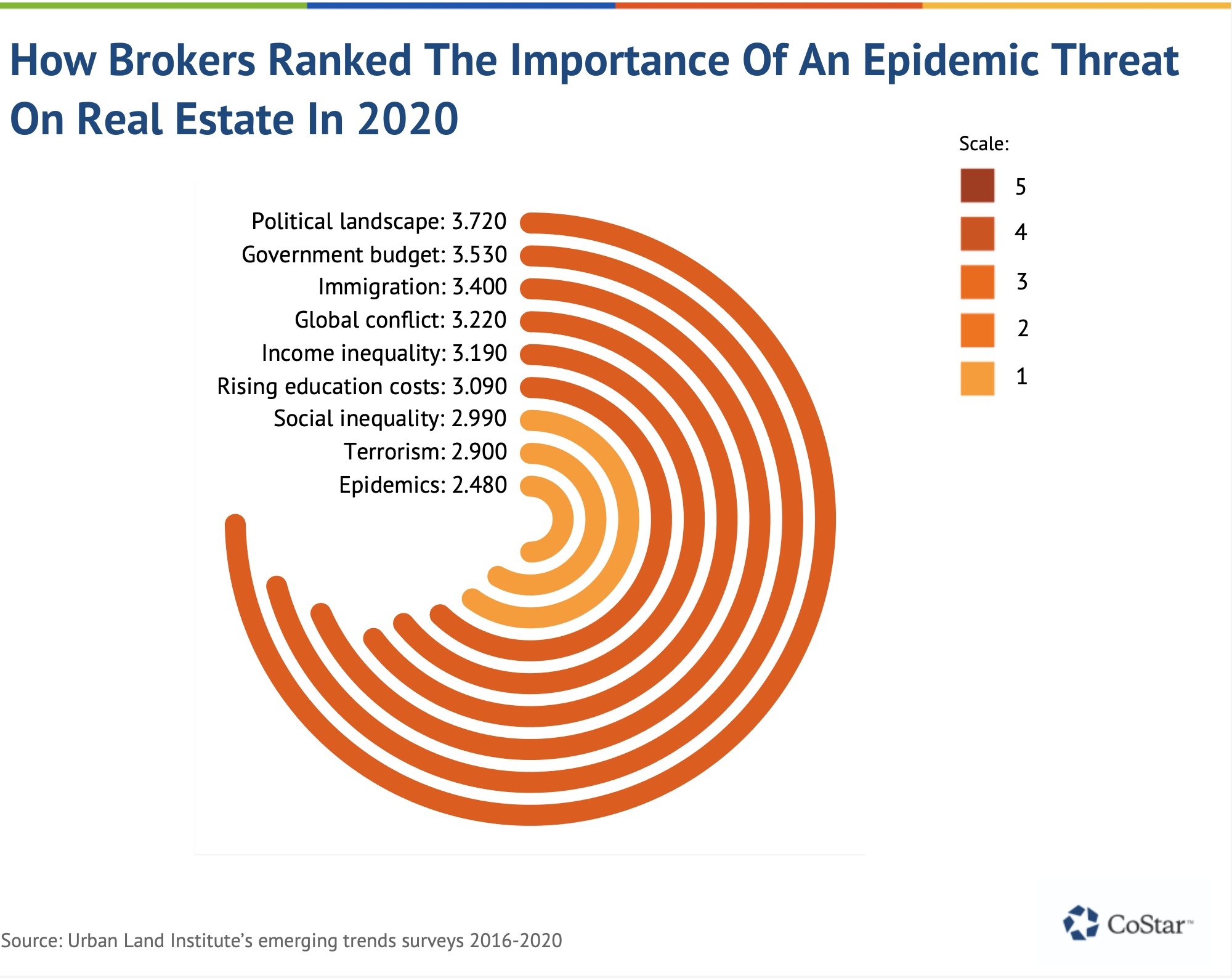 “This is a black swan,” said Byron Carlock, who leads the U.S. real estate practice for global consulting firm PwC, about the coronavirus pandemic. “You don’t know when it’s going to happen or when it’s going to appear. It’s like the 100-year flood in a medical context.”

The coronavirus was first identified in late 2019 in Wuhan, China, and was declared a global pandemic by the World Health Organization on March 11.

To help halt the COVID-19 spread, companies have emptied out U.S. office buildings and are having employees work remotely. Most malls across the country have closed. Apartment amenities are off limits for residents.

Cities and states have closed restaurants and bars and told people to stay home. Theme parks have closed. Hotels have lost significant revenue because of canceled group meetings and conventions.

Cities have essentially come to a standstill, putting a lot of people out of working temporarily.

Over the past dozen years, the U.S. economy weathered multiple epidemics and pandemics. But none drew the reaction that COVID-19 has drawn..

U.S. health officials as well as the World Health Organization have said this virus is more contagious and deadly than previous ones, and the best way to weather it is to limit person-to-person contact so medical personnel are not overwhelmed by the sick.

In a March 18 call to clients and investors, Richard Barkham, global chief economist for real estate brokerage CBRE, painted an economic picture that isn’t nearly as bleak as being portrayed by other financial analysts.

He summed up the economic situation bluntly: “Short-term brutal but medium-term positive.”

The expectation is that COVID-19 peaks somewhere between May and August followed by a period of recovery. Barkham projected that unemployment will rise from 3.5% to 5% and then stabilize.

Jim Diffey, chief economist for Boston analytics firm IHS Markit, noted there were demand or supply problems with the economy before the health crisis began, unlike during the financial crisis a dozen years ago.

Barkham said pent-up demand will be one driver for kicking the economy back into gear. “We’ve already seen a very strong retail impulse in China as people get back to normal,” he said.

But he said another big factor will be the strong, “almost unprecedented” fiscal stimulus that represents about 8% of GDP, which is many times higher than in Europe.

Meanwhile, the country is going through perhaps its biggest experimental run with employees working remotely.

PwC’s Carlock said “we as a firm have been pushing mobility” with clients and the firm itself has shifted to that strategy. “This is a real test of our strategy,” he said.

But the health crisis forced companies resistant to the idea of remote employees to go that route to stay productive, which Carlock said may make them more open to flexible work environments once the crisis abates.

More broadly, the real estate industry will take away lessons as it did post-9/11. Then, it was about such issues as resilience and system protection. Now, security, cleanliness and sanitation will be among the takeaway issues, Carlock said.

Chris Ludeman, global president for CBRE’s capital markets group, told investors on the CBRE call that the industry will be “better equipped for future pandemics because of the lessons” learned from this health crisis.

“Crisis is a cruel but unifying event,” Ludeman said.