Brett White, CEO of global commercial real estate services giant Cushman and Wakefield, sees some bad times immediately ahead for office space, though he expects that to reverse with new job creation.

“We’re very optimistic with the signs … that we’re seeing in the marketplace right now,” White told CNBC in a recent television interview. He pointed to increased “transactional velocities” and market activity, all dependent on vaccination levels or a lack of Covid-19 cases in countries like Australia and New Zealand.

As of last fall, C&W found office space demand to decrease by 30% more during the pandemic than the 2008 Great Financial Crisis.

The looming downward pressure of less need hasn’t suddenly evaporated, either. For example, in his annual shareholder letter, JP Morgan CEO Jamie Diamon wrote that remote work will “significantly reduce our need for real estate.” Both Salesforce and PricewaterhouseCoopers are also trying to drop large amounts of office space, according to the Wall Street Journal.

Despite improvements in office space demand, office vacancies have continued to increase. Part of the explanation is the pandemic-driven shift to remote work. Another is new office building stock that was already under construction. Developers and builders delivered 14 million square feet of new space in Q1; 64 million square feet is expected by the end of 2021.

Research from CBRE suggests that 98% of surveyed respondents expect to return to the office by the third quarter of 2021, but that doesn’t necessarily mean the same levels of occupancy.

What does all of this add up to? White said that CEOs are generally talking about a 10% to 15% reduction in demand for office space in the immediate near term. But he added, “it’s important to remember that over the next two, three years, that will be fully mitigated by the creation of new jobs in the US economy and global economy.” He added, “We think, by the way, that the three million office working jobs lost in the early months of the pandemic will be fully regained by the fourth quarter of this year.”

It is important to note, however, that office jobs regained aren’t necessarily the same as regained jobs in a traditional office setting given the embrace of hybrid work schedules by many companies. As for totally new jobs, the future is murky.

Although there has been a large uptick in new business formations, the major bulk of them are so-called low propensity, which means little chance for payroll and, as a result, could mean low need for office space beyond flexible facilities.

So far as job growth, the following graph shows Bureau of Labor Statistics total non-farm jobs per month, from January 2019 through March 2021 (February and March 2021 aren’t final figures at time of publishing.): 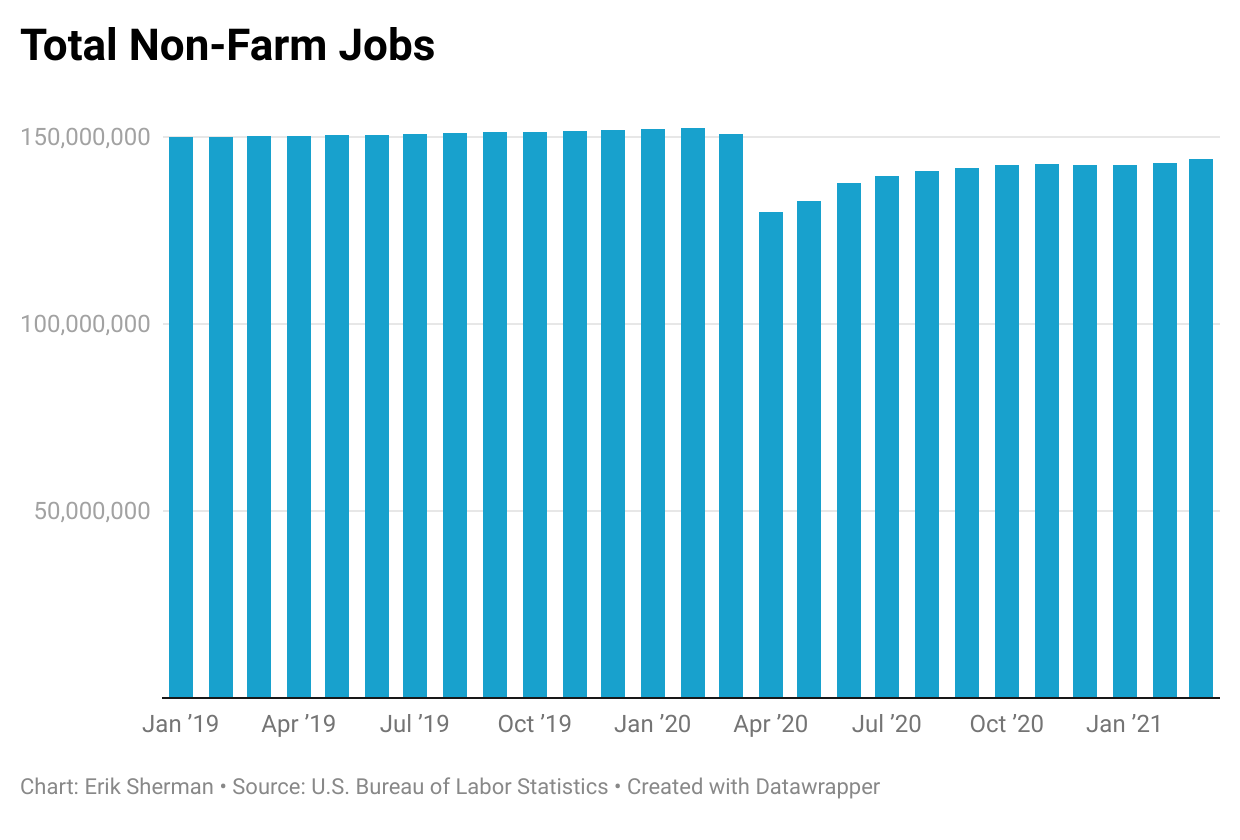 The economy is still 9.4 million jobs short of the February 2020 high point. Using Excel’s forecast tools to project estimates based on job growth since recovery started in August 2020, it would likely take until February 2023 to catch up to the job numbers of February 2020. Although greater vaccination rates might significantly improve the pattern, expecting millions more additional jobs to soak up reduced office occupancy is optimistic.

The BLS also projects significant changes in job growth patterns. Retail trade, traveler accommodation, food services, construction, corporation management, real estate, utilities, finance and insurance, energy, wholesale trade, and others all are expected to see job losses from a non-pandemic expected baseline between a fraction of a percent to 12% or more. The winners will be mostly in professional, scientific, and technical services as well as information and manufacturing. But none hit a projected rate of even 2%.

In this changing environment, translating job numbers into office space needs is far from straightforward. Uncertainty will be the watchword, rather than an expectation of job growth eliminating occupancy concerns.