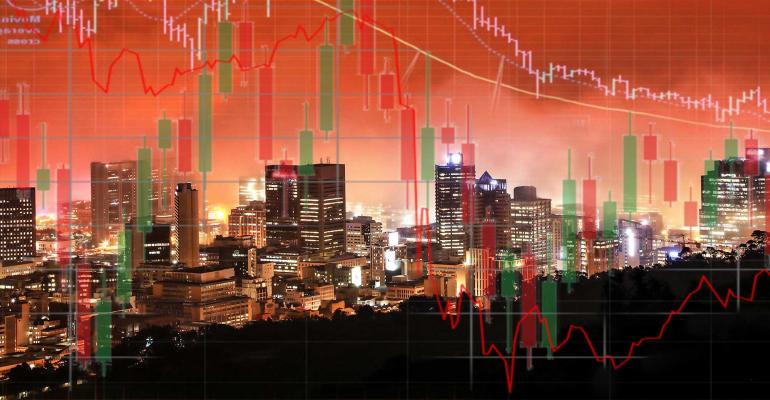 One of the big selling points of CMBS loans—their non-recourse structure—may come back to haunt investors in the COVID-19 recession.

A growing number of borrowers are throwing in the towels and walking away from distressed CMBS loans in cases where equity has been completely washed away. That distress is particularly acute in lodging and retail with the volume of loans that have moved to special servicing for August at 25.0 percent and 17.3 percent respectively, according to Trepp. Examples include some of the biggest names in real estate and major assets within CMBS conduits. Bloomberg recently reported that some of the entities controlled by Blackstone Group Inc., Brookfield Property Partners L.P., Starwood Capital Group and Colony Capital Inc. are among those handing back keys on some struggling assets—even as they continue to rake in millions in new fundraising.

CBL & Associates Properties was one of the first mall operators to announce in May that it would cooperate with lenders on foreclosure proceedings on some of its struggling properties that included the Park Plaza Mall in Little Rock, the Eastgate Mall in Cincinnati, and Hickory Point in Forsyth, Ill., among others. According to Fitch, CMBS conduit exposure to CBL-operated malls back in May included 16 loans totaling $1.06 billion. Hickory Point Mall has since been liquidated with a 68 percent loss on the loan’s original $33 million balance. Of the 15 remaining loans, six are currently with their special servicer, according to Fitch. (CBL appears to be prepping for a bankruptcy restructuring.)

There were a number of class-B malls that were clearly struggling prior to COVID-19 but were still managing to generate positive cash flow to cover debt service. The impact of the pandemic on brick-and-mortar retail has resulted in owners who are now in a cash flow negative situation. “I think that is causing a lot of them to consider whether or not they want to keep reaching into their pocket to subsidize the property for another 12 months, when they know it’s going to be impossible to refinance,” says Manus Clancy, senior managing director and the leader of applied data, research, and pricing departments at Trepp.

CMBS borrowers or sponsors that have little or no equity left in a property can walk away relatively unscathed. “It is very easy for the borrower to stick the keys in the mail and be done. They can shed their liabilities within 30 to 60 days if they are going through a cooperative foreclosure,” says Clancy.

Ultimately, it will be CMBS investors and lenders that were required to keep skin in the game as part of risk retention rules who are going to end up taking a financial hit on the bad debt. “Inevitably, there will be losses running through the waterfall of the CMBS trust,” says Brian Olasov, executive director, financial services consulting at Carlton Fields and an adjunct professor, real estate capital markets at the NYU Schack Institute of Real Estate.

In the Great Recession, the government created the Term Asset-Backed Securities Loan Facility (TALF), which added liquidity to the CMBS market. That was partially revived earlier this year. However, in the current recession, both bond holders and borrowers are being hurt by the impact caused by COVID-19, adds Bryan Shaffer, a principal and managing director at George Smith Partners, a real estate capital advisory firm based in Los Angeles. In rare cases, the borrower is playing the system in being able to walk away from their non-recourse loan, but at the same time many borrowers are being punished by the lack of flexibility of CMBS lenders, he says. “In my view, this is not a business cycle change , but a once in a lifetime national emergency caused by a global pandemic. So, the federal government should play a role in providing liquidity to lenders to allow borrowers to stay in their current loans,” he adds.

Although investors certainly seem to be getting the short end of the stick, most were well aware of the going in risks. “Everyone goes into this eyes wide open. If you’re in the CMBS market, you know these loans are non-recourse. You know that the borrower can give them back, and you’re relying on the 20- to 25-year history of the market to understand what that risk is,” notes Clancy. It creates a more difficult situation for special servicers when a borrower contests a foreclosure, because it drags out the process and ends up costing the lender more time and money to get control of a property.

Non-recourse is nothing new in the CMBS world, but the feature certainly moves to the forefront in the times of crisis. During good times, non-recourse is not generally an issue. “A borrower has equity to protect and is going to continue doing the right thing in servicing the debt and following all of the covenants required of them under their loan agreement,” says Olasov. In situations where a borrower doesn’t have equity in the property and the immediate outlook for the property are grim, they are more likely to cut their losses. “CMBS allows borrowers to do exactly that,” he says.

The fact that CMBS loans rely on separate special purpose entities to structure individual loans provides added protections for borrowers that have other holdings. The separate structures weren’t intended as a loophole, but rather a means to help ratings agencies better understand the underlying credit risk. For example, if a borrower owns 12 different shopping centers and files bankruptcy on one, it could potentially create a ripple effect that might take down the whole portfolio.