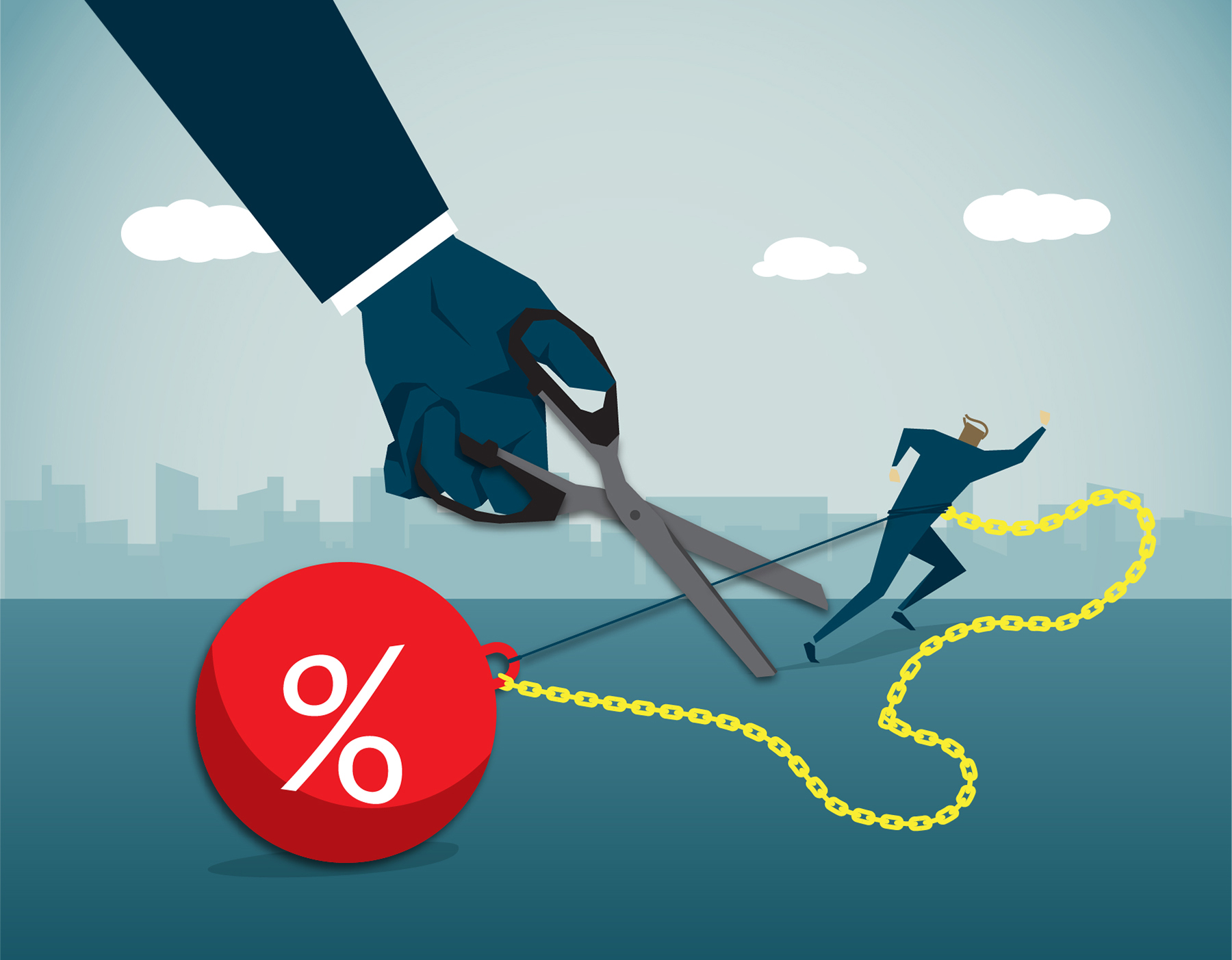 We’ve spent a lot of time over the years, too much time perhaps, parsing Federal Reserve statements after every meeting for insights into the Open Market Committee’s thinking and what that may mean for the future of policy. Why? Not because it’s fun! The main reason is that forward guidance is as much a part of monetary policy as moving interest rates up or down, and it is a powerful tool on its own. A 25 basis point cut in rates today is even more powerful if the Fed hints that more cuts are coming, and soon.

So what do we take from changes in the Fed’s latest statements from September to October? They want us to stop assuming that more rate cuts are coming, for one thing.

While cutting rates by 25 basis points, the Fed removed the two phrases that are struck through in the quote at the beginning of this article from its forward guidance. The implication is that investors and business leaders should contemplate less what the Fed is going to do, and instead pay closer attention to economic data as it comes out over the rest of the year.

Watching the data has gotten more interesting given the speculation over a growth slowdown in the second half of this year into next. So far, the fears of an imminent recession have been exaggerated compared to realized data. GDP growth fell only modestly in the third quarter to a 1.9% annualized growth rate, less than the 2.0% seen in the second quarter but above the forecasted 1.6% (and many high-profile calls for worse.) However, as we discussed two weeks ago, consumption is driving the lion’s share of growth as companies take down investments.

Wage growth has also slowed in recent months, now 3.0% year-over-year, leading total aggregate weekly payroll growth (an all-in labor growth measure) to increase 4.3% from the year prior. This is solid, especially when considering some of the recent slowdown can be attributed to temporary factors, most notably the GM strike withholding approximately $2 billion in wages in the month.

While we often focus on the consumer as being more important to the economy than investment, one cannot separate the two. Less investment recently means fewer factories, malls and machines. If hiring is to continue at this pace, where will they work, and what will they do? There is a reason capital investment is so essential to productivity, and productivity so important to growth.

Today’s disconnect between still-strong hiring and drastically slowing investment becomes difficult to reconcile. As stated by Deutsche Bank’s chief economist Torsten Slok, “if you use less capital in your economy, you will eventually use less labor.” 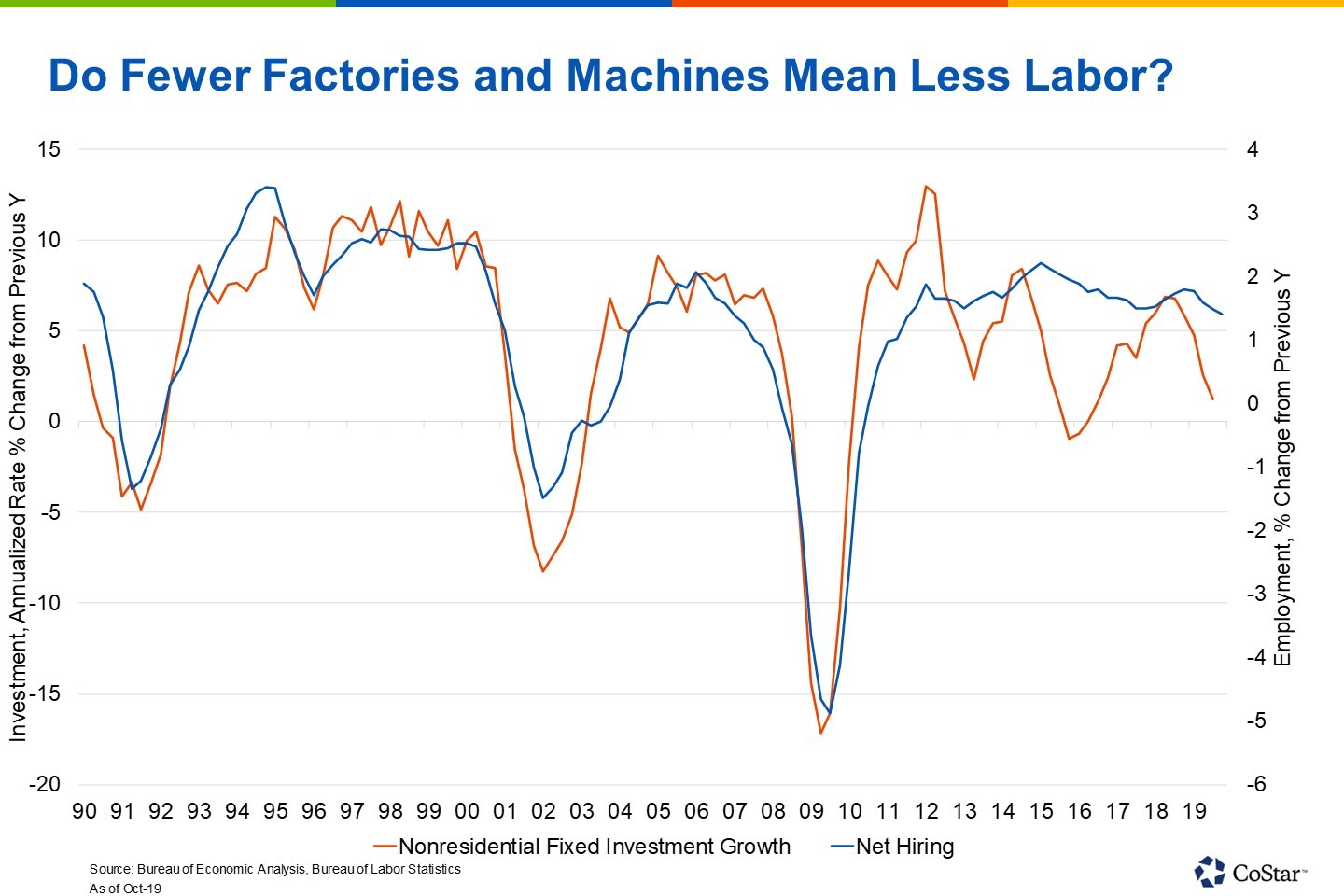 Moving to the second part of the consumption equation, consumer confidence is equally worrying. While confidence in current conditions is currently stable near record highs, consumer expectations for the future have dropped the most in a year since 2009. Future expectations tend to be a better predictor of consumer spending (i.e. people will spend money if they are confident that the future is bright, but will save money if they are worried about the future.)

Given that the consumer is now even more important to the economy than usual, this bears close watching. It’s no surprise that the collapse of future expectations tracks nearly one to one with the yield curve. We aren’t out of the woods just yet. 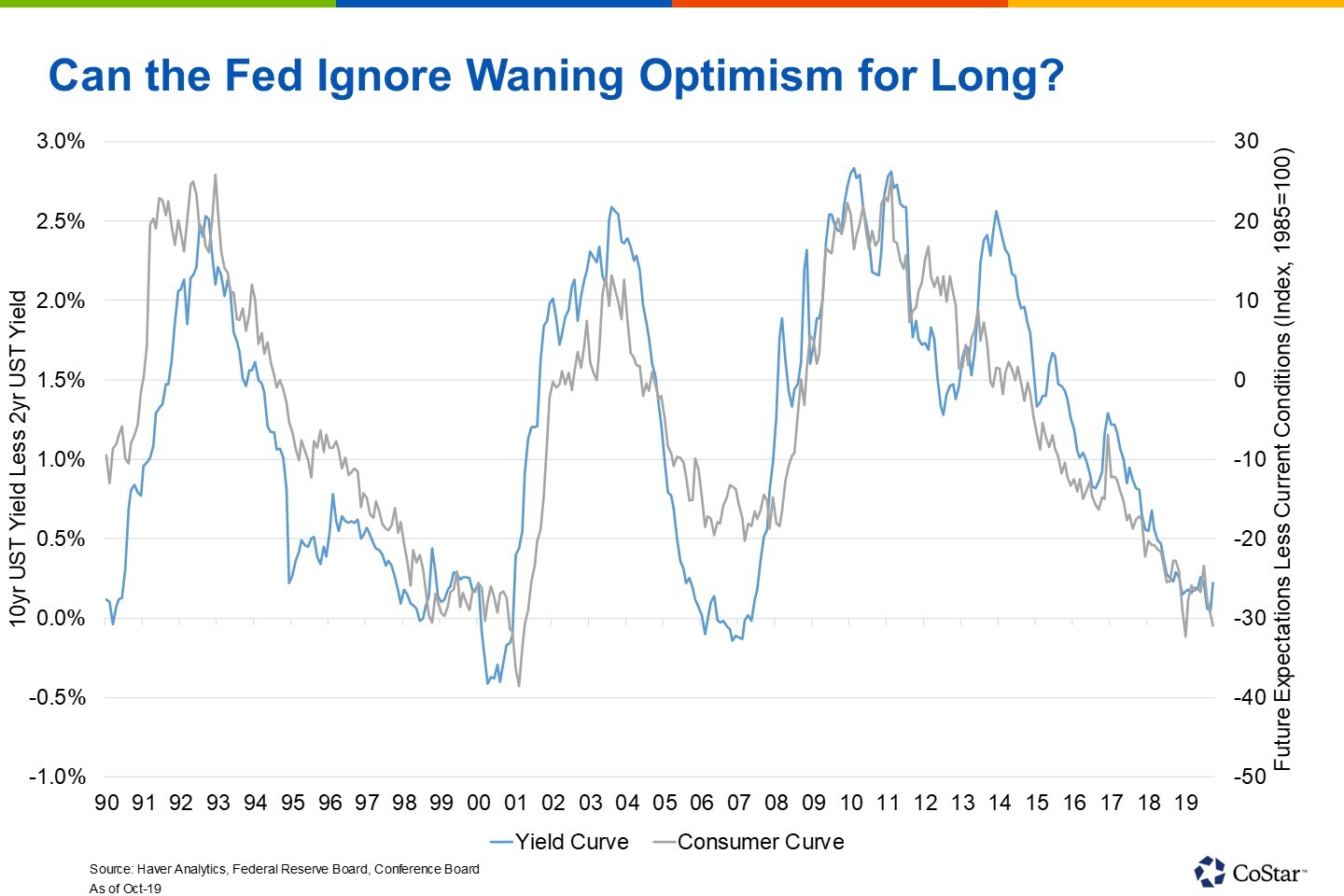 This reveals the small margins available to the Fed, even as it aims to pause on rate cuts. Conditions today are great, but with seemingly little room for more than minor improvements. Conditions tomorrow are viewed to be worse for a variety of reasons.

We’ve somehow made it this far into the article without even mentioning trade, where China admitted this week it sees little chance of establishing a meaningful long-term trade deal with the U.S. Trade war angst is certainly a big driver of consumer worries about the future, and unfortunately this is completely out of the Fed’s ability to control.

The Fed’s signal that it intends to take a pause in rate cuts is meaningful, but ultimately the decision may be out of its hands. This is the blessing and the curse of being “data dependent.”

Next week is a hangover from the previous week’s data sugar high. However, close inspection is warranted on Tuesday’s Non-Manufacturing ISM Index, in which service-providers will indicate their business conditions for October. We will look to see if the index can rebound from a sharp fall in August to the worst level in years.

The employment component of this report is likely to be more predictive of future labor market conditions than Friday’s jobs numbers, as it is more forward-looking. Similarly, the Bureau of Labor Statistics releases its report on number of job openings in August, also a good leading indicator despite the lagged nature of the report (it’s already November!)

Fed speakers look to clean up any confusion in the market over the statement changes, and perhaps reacting to the jobs and GDP numbers that came out after their decision. Wednesday will be the busiest day for Fed communications, with Chicago Fed President Charles Evans, New York Fed President John Williams and Philadelphia Fed President Patrick Harker all scheduled to give speeches.

Trade headlines will probably continue to be an important driver of economic and interest rate outcomes, though any real insight into developments is unlikely given the delay in the China-U.S. summit following Chile’s cancellation of APEC, and the United Kingdom’s December election.