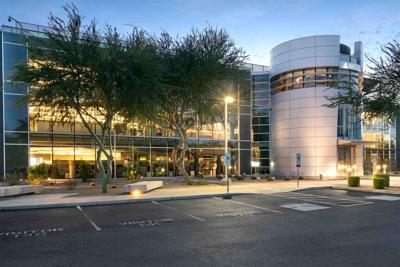 The City Council voted 5-2 on Nov. 10 to rezone the property for industrial use and make way for Axon’s new headquarters on 73 acres of land the company purchased from the state land trust for $49 million.

When complete, the headquarters will include office space, research and development, programming, manufacturing and distribution.

The rezoning also included an increase to the maximum height on the property to 82 feet – well above the 52 feet typically allowed in areas zoned industrial.

The 82-foot allowance will only be used on a small portion of the site where offices will be located.

The rest, all of which is on the eastern half of the site abutting the Loop 101 freeway, will be below the 52-foot threshold, City Planner Greg Bloemberg said.

Attorney Charles Huellmantel, who represented Axon, said the increased height for the office space allowed Axon to avoid creating shorter, wide buildings that would have encroached on nearby neighborhoods.

Only Council members Guy Phillips and Kathy Littlefield opposed rezoning due to concerns voiced by residents in the Scottsdale Stonebrook community, located directly south of the development.

The residents appear to support the project overall but wanted more time to get answers from the company and the city about how the project would impact their neighborhood.

“We’re delighted from a neighborhood standpoint to have them as neighbors; couldn’t ask for a better neighbor,” said Bill Miller, a member of the Stonebrook HOA. “What we are concerned about though is the lack of notice.”

Huellmantel said the company did ample outreach and complied with all city requirements.

According to city staff, all neighbors within 750 feet were notified with postcards on Sept. 23 and received additional notifications prior to the Planning Commission and Council hearings.

But the residents said that was not enough time to work out issues with the company.

“We’ve been put on notice that these meetings were going to occur; we’ve been sent the postcards, we’ve seen the signs, but those signs were only put up in late September,” said Mary Kay Kennett, another Stonebrook resident.