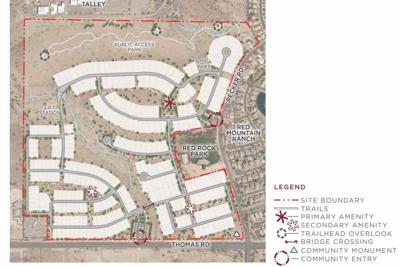 Beyond the oft-stated concerns about airport noise and residential encroachment on Falcon Field, a 17-acre buffer sliced from the 132-acre site will be converted into a nature trail with a small parking lot.

Although the city and Blandford are the big winners from the $21.1 million auction of city property, the park will make it easier for visitors as well as Red Mountain residents to enjoy views of the surroundings.

Red Mountain residents have either parked at a private area operated by the homeowner’s association or walked to the site at Thomas and Recker roads. Anyone else has had to park along Recker, sometimes irritating neighbors.

“I feel we have accomplished what we wanted to with this property,’’ Mayor John Giles said. “It’s going to be upscale homes that I think will increase the property value of the entire neighborhood. We were able to have the mountain trail park and have it developed with the proceeds. The whole region will have more park amenities.’’

City Manager Chris Brady said he always had planned to compensate residents for selling the property – which the city purchased in 1998 for $4 million – by spending $4 million on recreational improvements in northeast Mesa.

But Brady said he decided to increase that amount to $5 million to include $1.2 million for the nature trail as well as pickle ball courts at Gene Autry Park and improvements to soccer fields at Red Mountain Park.

When sale is completed in November, Brady said he will discuss with Council what to do with the remaining $16 million in profits.

Verl Farnsworth, a Red Mountain Park resident and a mayoral candidate, accused the city of stealing the parkland for its own benefit, contending the original plan was for Blandford to pay for developing the park.

“The agreement as written right now is way outside of the original agreement,’’ Farnsworth said.

“I think it’s a violation of the original agreement,’’ he said, threatening to file a complaint with the state Attorney General’s Office.

Farnsworth and other residents criticized the city for a lack of community involvement before auctioning the property.

“You’re just springing it on the citizens of Mesa,’’ Farnsworth said, accusing the city of “propaganda by citing the 20-year-old votes that doomed the original plan to turn the site into a park.

“We’re getting the 17-acres without any cost,” Brady countered. “I think that’s a fair trade for us.’’

He said the 17-acre site will be a buffer between the Reserve at Red Rock and Nammo Talley, a defense contractor that manufactures explosives.

The site includes an appealing desert wash that would have been impossible to develop for homes.

“It was a balance trying to achieve the buffer. It’s an ideal place to have a nature trail,’’ he said.

The city originally purchased the property, expecting to build a park, to prevent its development for homes and reserve it for commercial development.