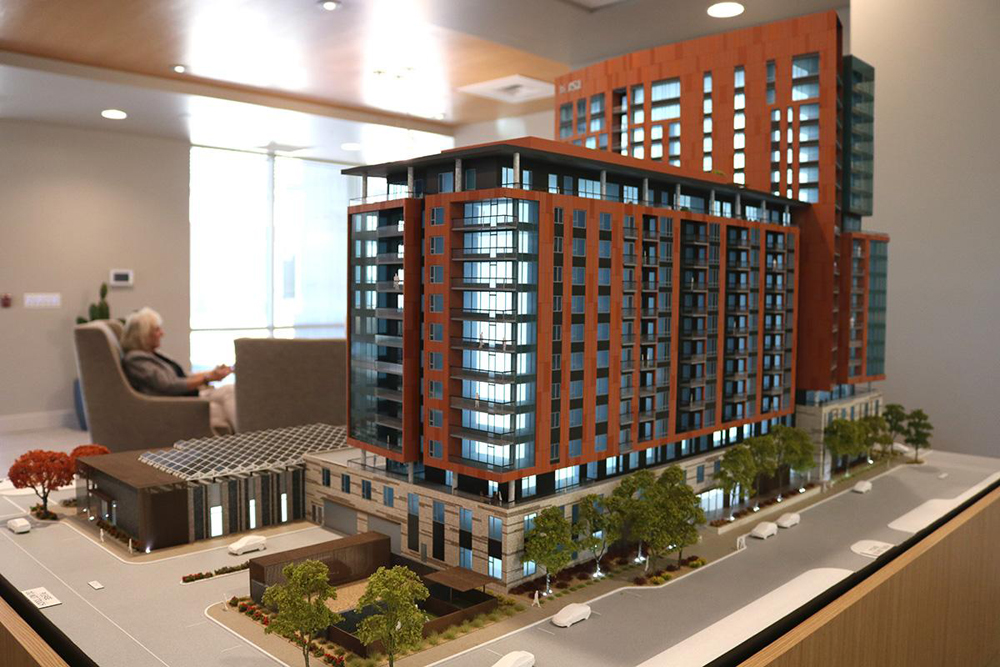 A nonprofit developer and its general contractor are wrapping up a $167 million project aimed at luring retiring baby boomers into senior housing by bringing them back to some of their college roots.

Pacific Retirement Services, based in Medford, Oregon, and McCarthy Building Cos. of St. Louis are working with Arizona State University to build the Mirabella at ASU retirement community on the university’s campus in Tempe. Work crews have placed the ceremonial final beam on the 20-story, 614,000-square-foot tower that’s scheduled to be ready for occupancy in August 2020.

The project is striving to blend resort-style living with the learning and recreational aspects of the university, with penthouses and apartments ranging from 751 square feet to 2,665 square feet. The tower includes four dining venues, an indoor pool as well as an event center, library, game room and even a wood shop.

National architectural firm Gensler noted the promise and challenges of locating senior housing on college campuses as the first wave of nearly 80 million baby boomers enters the retirement years: “Innovative solutions to meet the housing needs and provide meaningful experiences for seniors should include regular socialization with all ages,” authors Lisa Morgenroth and Michael Hanley said in a 2015 paper titled “How Higher Education Can Inform Seniors Housing Models.”

Notable university-based retirement communities have opened over the past two decades in Massachusetts, Oregon, California and Indiana, the authors wrote.

“With some creative thinking and financial planning, developers and institutions leverage these benefits and share them with the aging population,” Morgenroth and Hanley wrote. “The organizational structure is already in place (and) it is a question of expanding the view to include a larger, more diverse spectrum of higher education institutions.”

Phoenix ranked second in the nation last year with an average of 200 people moving to the city every day, fueling demand for both retirement and conventional multifamily housing, according to CoStar Analytics.

Developer The Weitz Co. recently began a 200,000-square-foot expansion of Sagewood at 4555 E. Mayo Blvd. to add 101 one- and two-bedroom independent living apartments, and Ryan Cos. last month broke ground on LivGenerations Mayo, a 181-unit senior living community in Phoenix.

Under an agreement with Arizona State, Mirabella residents are going to be allowed to attend and participate in college classes, activities and programs. Pacific Retirement is working with the Arizona State University Foundation to coordinate social, learning and entertainment activities “that will offer a landing place” for older retired alumni and others, according to a McCarthy statement.

“It’s going to be a marvelous opportunity not only for our new Mirabella residents but for the students and faculty who will be able to interact with these folks,” Lindsey Beagley, director of lifelong university engagement at Arizona State University, said in a statement.

Like other continuing-care communities developed by Pacific Retirement, Mirabella will include independent living, assisted living and memory support, as well as private suites with nursing care. The building will have 252 independent-living apartments, 11 assisted-living apartments, 20 memory-support units and 21 private nursing units.

“There is no other facility like it in the state,” said Justin Kelton, president of the McCarthy Building Cos. Southwest region.