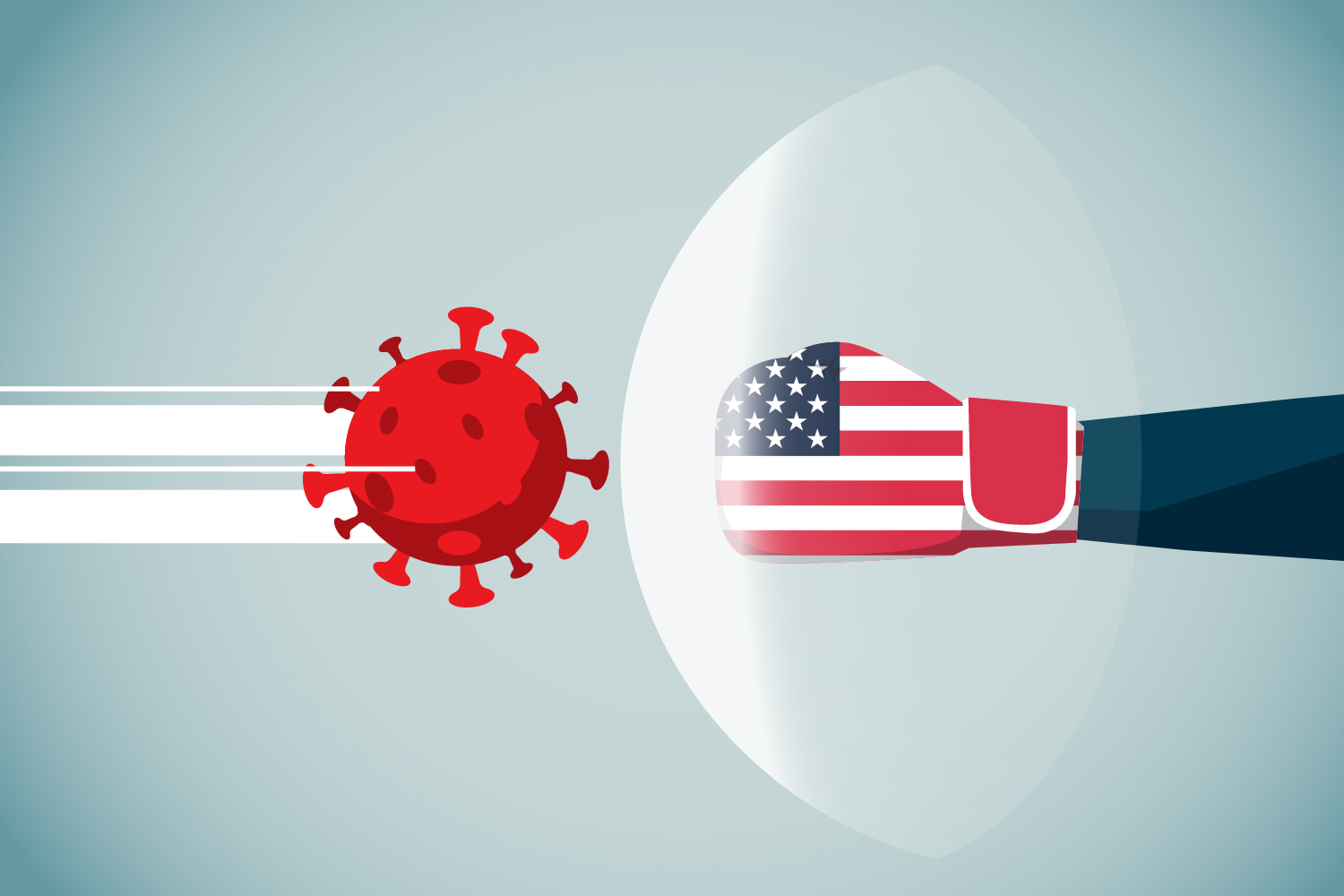 Earlier this year, as vaccinations became widely available, hopes abounded for a quick recovery from the economic ruin visited upon us by the coronavirus pandemic and the efforts to contain it. It has now been 18 months since COVID-19 was declared a national emergency in the U.S. And unfortunately, cases are rising again in many parts of the country, driving governments and businesses to take additional measures. 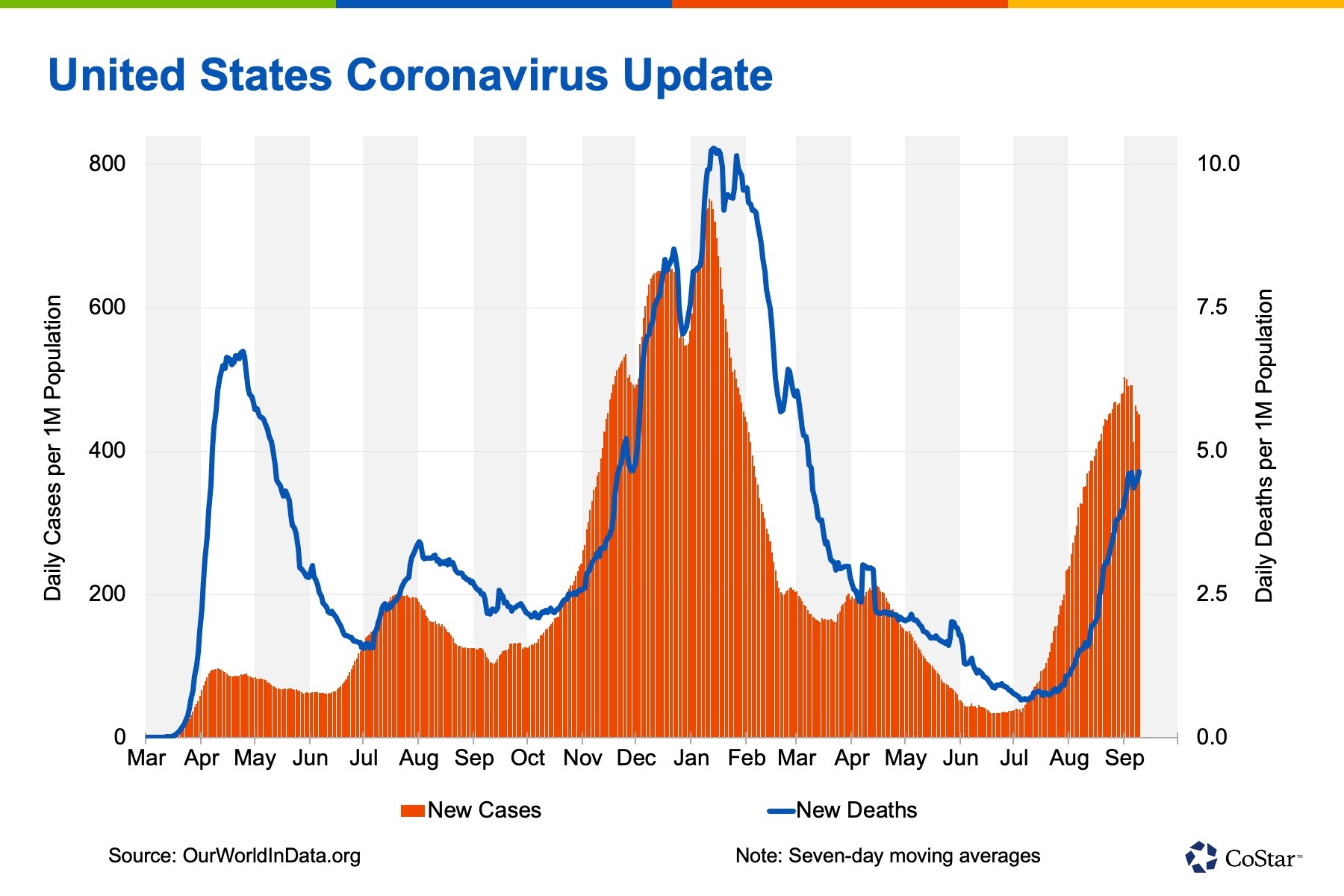 Social distancing measures have been reinstated, firms have delayed return-to-office policies, and consumer confidence has taken a hit. Last week, in a final push, President Biden signed executive orders requiring all federal government employees and contractors who work with the federal government to be vaccinated against COVID-19, as well as other related measures.

The recent wave of cases is causing economic momentum to slow. However, growth remains positive. The areas experiencing rising cases have been less likely to implement restrictions that could bring renewed job losses, production stoppages, or school closures. Using mask-wearing policies as a proxy for the likelihood that states would impose these types of restrictions in the face of rising caseloads, several states in the South have barred local governments and school districts from mandating masks. In contrast, states like California and New York encourage masks even for those who have been vaccinated. 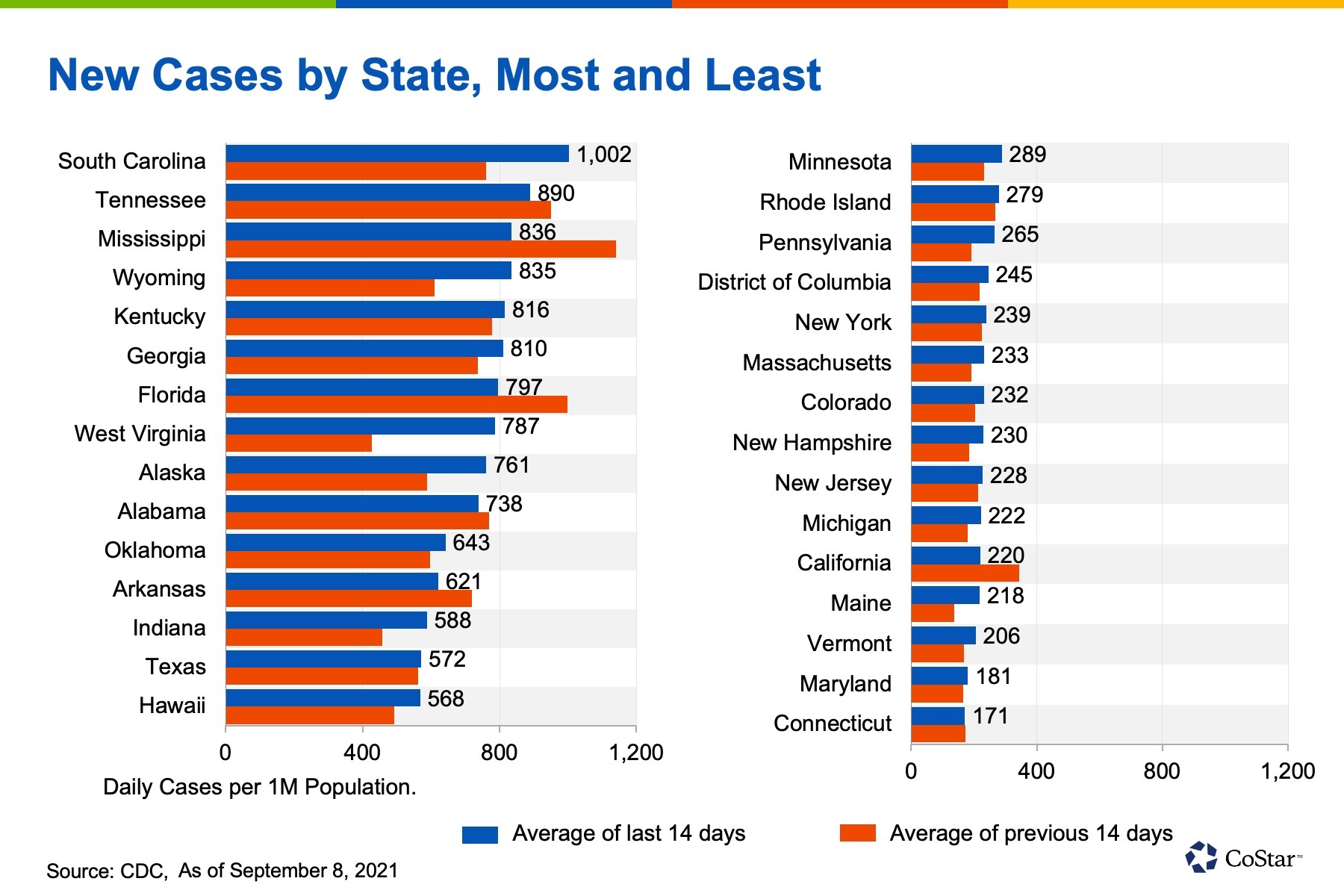 Much like mid-March 2020, forecasters are incorporating the longevity of the health crisis into their economic projections and downshifting their outlooks as the delta variant spreads. Last week, Oxford Economics released its newest forecast, which calls for 2.7% growth in gross domestic product (annualized) in the third quarter of 2021, a far cry from its earlier call three months ago, when it appeared that the pandemic was near its end, that the economy would see 11.1% growth for the third quarter.

Job Openings High, but Unemployment Benefits Are Running Out

Following the disappointing August monthly jobs report, the federal Job Openings and Labor Turnover Survey provided further evidence that a slower pace of hiring is likely due to a tightening labor supply rather than weaker demand for workers. In July, job openings grew to a historic record of 10.9 million, up from 6.7 million in July 2020 and 7.1 million in July 2019. It was the fifth month in a row that job openings reached new highs.

The largest increases came from the health care sector, where openings grew by 294,000, followed by finance and insurance, where openings grew by 116,000. Job openings in the accommodation and food services sector rose by 115,000, the smallest number since January as coronavirus cases spread across the country, dampening demand for travel and restaurant meals. Openings in retail trade, another sector generally needing in-person interactions, fell by 95,000. Compared to pre-pandemic levels, all sectors report more unfilled positions. 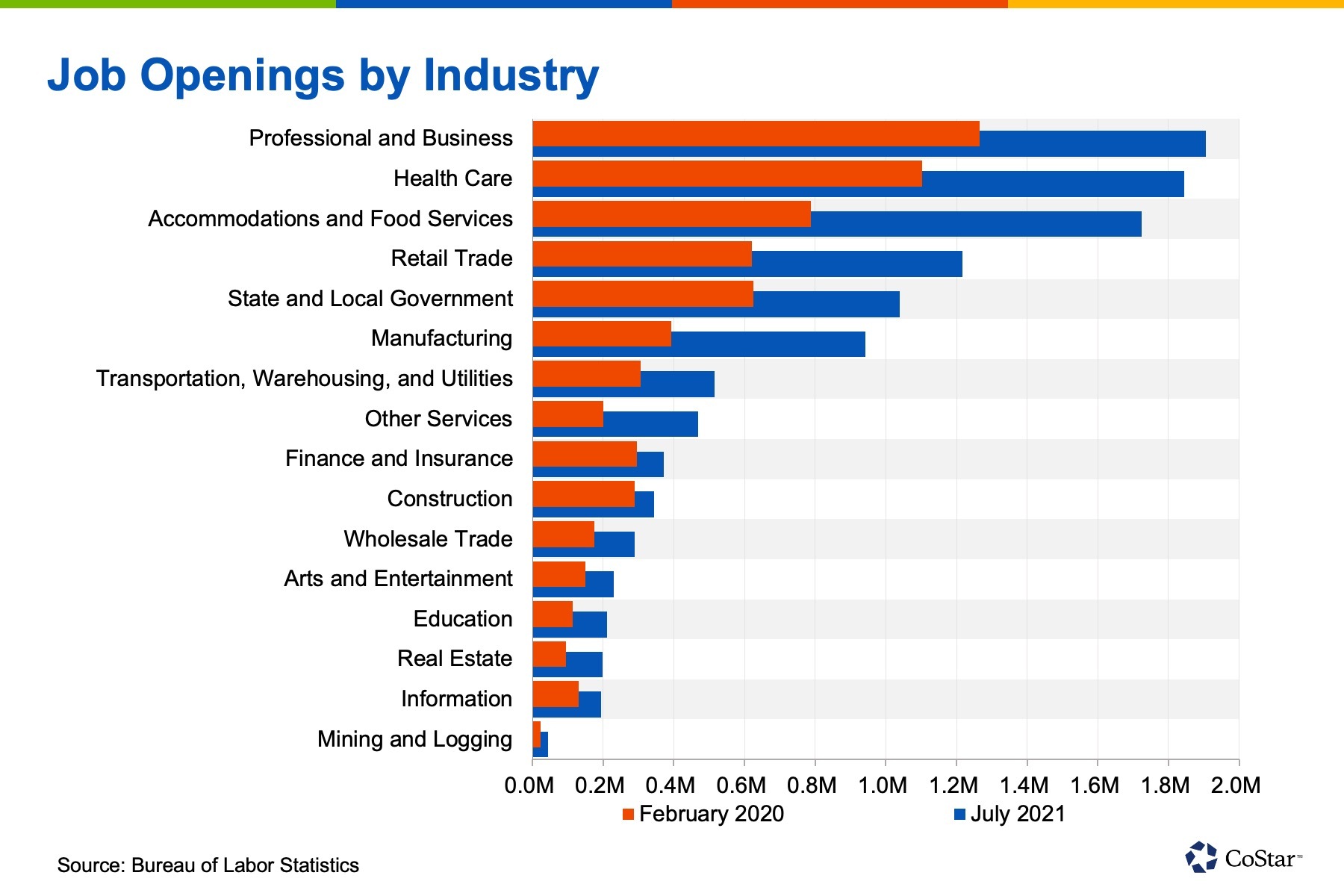 The quit rate, which can reflect workers’ confidence in finding another job, remained 2.7% in July for the second month in a row, higher than pre-pandemic days when the quit rate held steady at 2.3% throughout most of 2018 and 2019.

Hiring certainly appears to be a challenge. The August jobs report showed more than 8 million people are currently unemployed (and seeking work). Despite that representing an apparent pool of available labor, there are fewer than 0.8 unemployed individuals for each current job opening, a historic low.

Although hiring slowed in August as the delta variant spread and consumer demand cooled, firms appear to be reluctant to let their current employees go. Initial claims filed for unemployment benefits fell to a pandemic low of 310,000 for the week ending Sept. 4. That was the final week for workers to receive the extra $300 payment through the federal Pandemic Emergency Unemployment Compensation program, and for unemployed workers who would not normally qualify for unemployment benefits to receive any payments at all. Extensions of payments longer than typical lengths of unemployment have also now lapsed in most states. 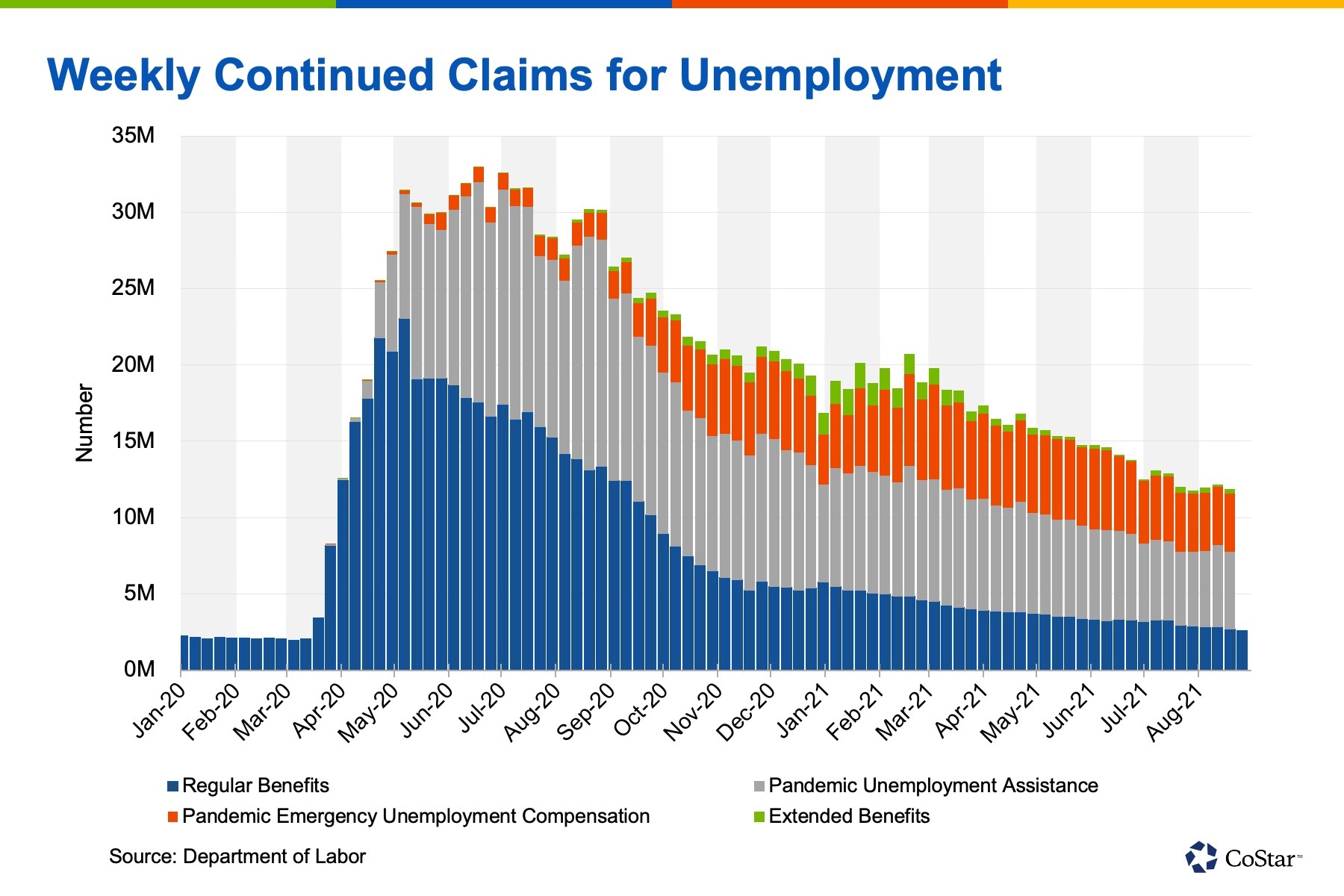 The Department of Labor reported that 11.9 million workers received benefits under all programs for the week ending Aug. 21. More than 9 million of these will no longer receive any assistance on the expiration of these benefit programs, so in coming weeks, these reports should show a much smaller number of continuing claims, i.e., all but the dark blue bars will evaporate in the chart above.

As presaged by the federal index for personal consumption expenditures released a few weeks ago, it looks like prices may be starting to slow from their meteoric ascent over the past few months. Producer prices rose by 0.7% in August over July, a strong showing but slower than the two previous months. Continued disruptions in supply chains have pushed prices higher in transportation and warehousing, which rose by 2.8% over the month, while food prices rose by 2.9%. The core index, which strips out food, energy, and trade services, rose at a much more muted rate of 0.3%, which was its smallest increase since last November. 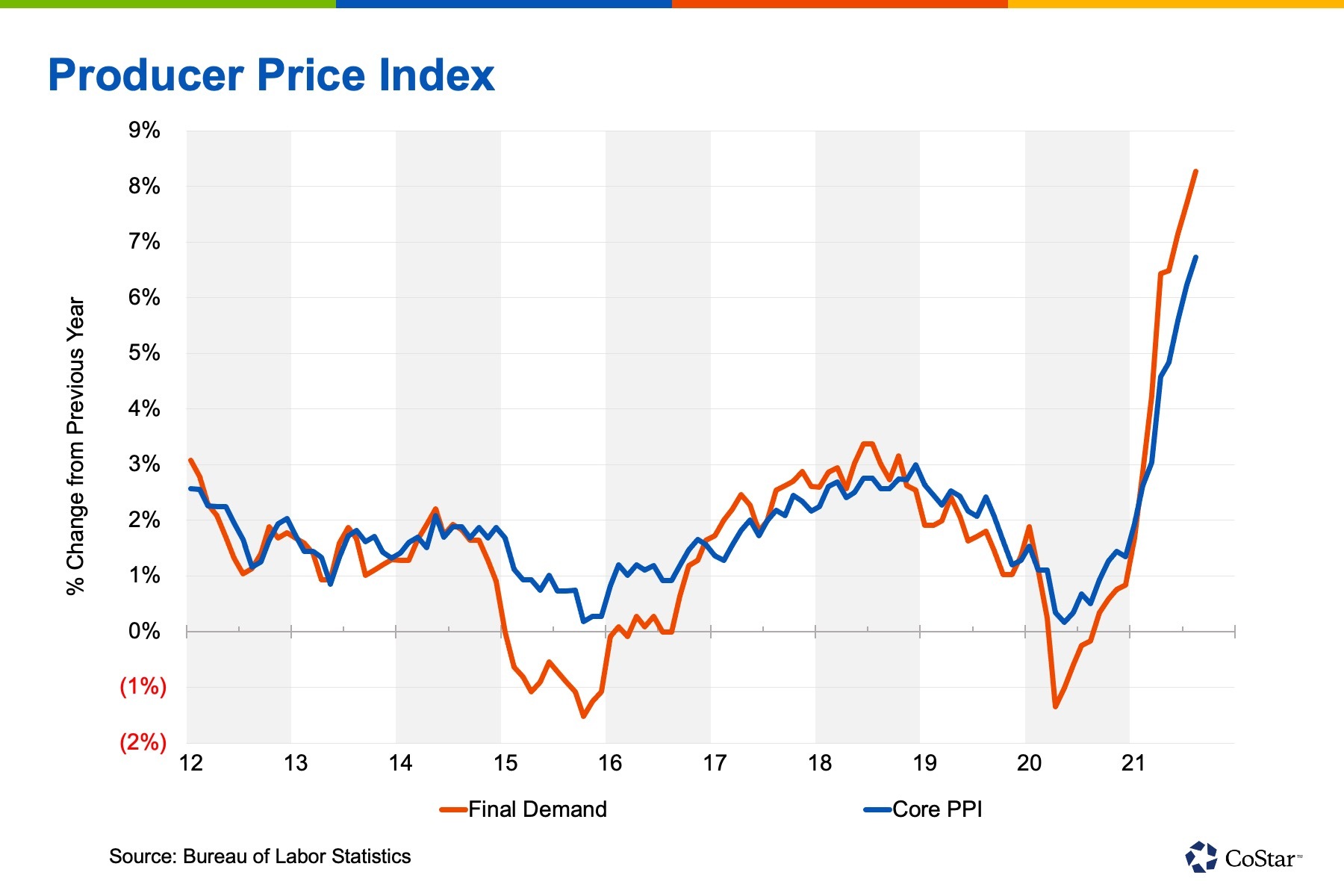 Despite the slower rate of growth, the PCE index reached a record high in August, rising by 8.3% over the year, with the core index rising by 6.3% over last August. Expectations are for price increases to continue to slow, but to reach consecutively higher record levels over the next few months.

More news on the inflation front comes on Tuesday with the Commerce Department’s release of the consumer price index for August. The rate of increase cooled last month and is expected to come in a bit slower yet this month as used car prices eventually return to earth. Still, don’t expect the inflation cycle to go away just yet. There is still a lot of economic ground to make up and strong consumer and business demand should continue to pressure prices.

Of most interest this week should be Thursday’s release of retail sales numbers for August. These fell in July as consumers turned away from buying goods and instead spent on services, such as entertainment, travel and tourism, which are not altogether reflected in retail sales. With COVID cases rising again and restrictions reimposed on some activity, the restaurant sector, which provided the biggest boost to retail sales in July, is likely to have seen a pullback and could pull sales into negative territory again.

The week is set to end with state-level employment reports. Analysts will be reading these carefully for evidence of the impact of curtailment of unemployment benefits on hiring, as many states ended their programs earlier in the summer to induce workers to return to jobs. Little evidence of the success of those actions has yet been found.