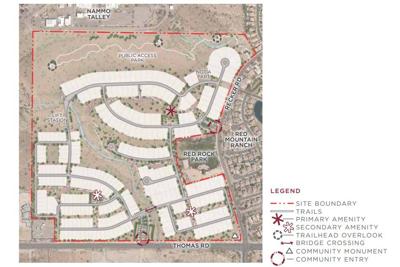 Blandford Homes’ site plans for the Reserve at Red Rock at Thomas and Recker roads in Northeast Mesa show, top left, how the community will be laid out and, at right, where it is located in conjunction with other properties in the neighborhood.

An undulating swath of pristine desert in northeast Mesa will be named The Reserve at Red Rock and become just the sort of resort-caliber residential community the city envisioned when it auctioned off the land last year.

In return for the $21.1 million land sale, Blandford Homes, one of Mesa’s premier builders, plans to build 296 high-end homes in the gated community, according to plans unveiled last week before the city Planning and Zoning Board.

Board members said they were impressed by Blandford’s attempts to maximize views of Red Mountain in the design, building around the property’s natural beauty rather than overwhelming it.

Despite opposition from neighbors who mainly voiced concern over traffic and losing their views of Red Mountain, the board voted 7-0 to recommend City Council approval of the zoning changes.

The council could vote on the zoning changes as early as February.

The zoning measures change the area’s character from parks to neighborhood, a point of contention for neighbors who still cite an old sign identifing the property as the site of a planned park.

A second zoning change allows the construction of single-family homes.

“I think this sets a new standard for me moving forward, with the open space and the land,’’ Chairwoman Michelle Dahlke said.

The homes eventually going up will be sold in three different subdivisions and will be designed to blend into the natural desert terrain.

They would use some popular floor plans sold in Blandford’s other luxury northeast Mesa neighborhoods, with base prices expected to range from $400,000 to $600,000.

Board member Tim Boyle, an architect who often criticizes what he considers as uninspiring architecture that comes before the panel, was impressed by the Preserve at Red Rock.

“This is the sort of thing we need to think more about in the city,’’ Boyle said.

Boyle and other board members, including Jeffrey Crockett, cited Blandford’s attention to detail, particularly the developer’s treatment of the main entry off Thomas Road.

In addition to the gateway’s resort-themed landscaping, the road is oriented toward Red Mountain, veering to the right to maximize the view for anyone driving into the property.

If Blandford obtains the zoning changes requested, it would put the company in a position to close on the land purchase from Mesa. Blandford submitted the highest bid for the 136.7 acres in May 2019 for $21.1 million and made a substantial down payment.

Jeff Blandford, the company’s president and CEO, said he had been eyeing the property for years and his company has extensive experience in dealing with natural desert features – and dealing with the kind of rugged terrain on most of the site.

A city zoning report said Blandford plans to develop 109 acres and deed back nearly 27 acres along the northern boundary to create a buffer zone with a nearby defense contractor.

Blandford’s plans say the buffer would turn into a 1 ½ mile loop trail with overlooks offering for views of Red Mountain in the distance.

Mayor John Giles insisted the project include a public park element, even though he acknowledged the sale will help city revenues.

But neighbors said they are worried about increased traffic on Recker Road from the new development and the park.

John Sell, one neighbor opposed to the plan, said the entrance on Recker should be only an exit, reducing traffic flow.

Blandford’s description outlines a series of trails within the gated community leading to a prominent recreational area.

This recreation area would include a pool, a clubhouse, a residents’ club and sports courts in the northern sector of the property.

Originally, the land was purchased by Mesa in 1998, to preserve it for use as future park after it turned into a contentious zoning battleground, with the city rejecting attempts to develop it as a subdivision and hoping to reserve it instead for job creation purposes.

But the goal of pursuing industrial or commercial uses clashed with the wishes of neighbors, who wanted a quiet residential area and feared additional noise and traffic.

The park idea, however, never took off. Voters rejected a park bond issue twice and the city moved on to other locations for parks as Mesa expanded eastward.

Tom Lemon, vice president of Blandford, said the company would close on the purchase this summer or fall. He said the development process would likely take about a year, with models going up in the fall of 2021 to trigger sales.

A large amount of bedrock in the area will require blasting and cutting by a specialized crew in a couple of different places, he said.

“It’s going to be one of the main cost drivers to development,’’ Lemon said, but not an obstacle that a highly experienced developer can’t overcome.