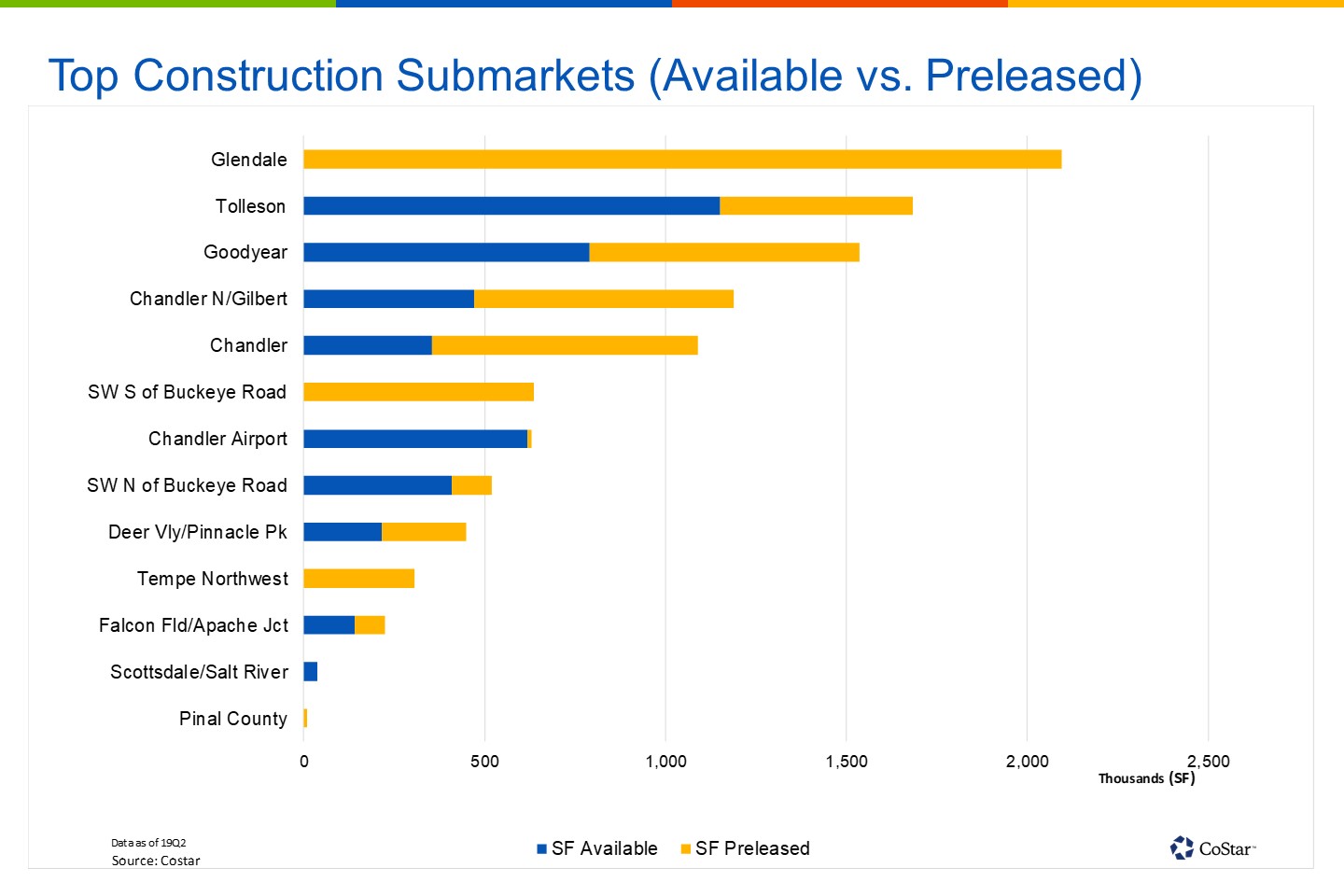 Industrial construction in the Phoenix metropolitan area accelerated in the second quarter, as developers broke ground on more than 3.3 million square feet of space, nearly double the market’s historical average for quarterly construction starts. Developers are keeping up with robust demand for space, fueled by e-commerce and distribution tenants looking to locate near fast-growing population centers throughout the metropolitan area.

Approximately 10.4 million square feet was under construction at the end of the second quarter. About 40% of the space is speculative.

Unsurprisingly, the concentration of new supply is in the West Valley, where there is an ample supply of affordable and available land and a large workforce that fulfills the needs of e-commerce employers needing significant labor. Chewy.com, XPO Logistics and Blue Buffalo took nearly 2 million square feet in the West Valley over the past 12 months. Recent large occupancies in the area have signaled to developers that new space is necessary, especially move-in ready space.

While Glendale has the most space under construction, the nearly 2.1 million square feet is preleased, alleviating the impact of supply-induced increases to vacancies. Alternatively, a combined 3.2 million square feet was under construction in the Tolleson and Goodyear submarkets at the end of the second quarter. About half of the space in Goodyear is available for lease, and roughly 68% of space is available in Tolleson. Although these are high-demand submarkets, the onslaught of new supply throughout the expansion has put upward pressure on vacancies, pushing the rate above the metro area average.

Builders are also active outside of the West Valley. The Chandler, Chandler North/Gilbert and Chandler Airport submarkets are also receiving a notable increase in supply. Advanced manufacturing is willing to pay a premium to locate near the high-skill labor pool in the East Valley, and last-mile distributors are attracted to the growing population. Orbital ATK is expanding its presence and is awaiting the completion of its 617,000-square-foot manufacturing facility in the Chandler submarket. Fujifilm is also increasing its footprint in the Chandler North/Gilbert submarket. The company started construction on its 85,000-square-foot plant, which houses the production of semiconductor materials.