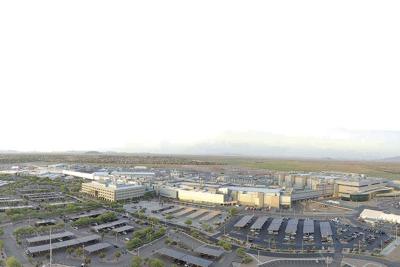 Intel’s stunning announcement of plans to invest $20 billion for construction of two fabrication facilities at its south Chandler campus over the next three years likely will have major implications for Ahwatukee’s already tight housing market.

And it stands to generate even more interest among developers in the May 26 State Land Department’s auction of 373 acres next to Club West as they eye an influx of thousands of new employees that Intel’s plan will bring in and around its Ocotillo facility.

State Land Department Commissioner Lisa A. Atkins declined comment on the Intel plan’s possible impact on bidding for that land along Chandler Boulevard between 19th and 27th avenues, which can accommodate at least 1,050 homes. The opening bid is $105 million for that parcel, most of which is already zoned for single-family residents.

But long-time Ahwatukee Realtor Allen Henderson said the law of supply and demand likely will impact both Ahwatukee home values and prices as well as the auction.

“As Intel goes, so does the Southeast Valley, basically,” Henderson added.

“As I hope you’ve gathered, Intel is back,” Intel CEO Pat Gelsinger said at a press conference March 23 announcing the tech giant’s plans for its Ocotillo campus. “This is the old Intel. It’s now the new Intel as we look to the future.”

A Gilbert economic development official said Intel’s investment will have a “spillover effect” not just on his town but throughout the East Valley.

And while the impact of the business part of that spillover on Ahwatukee may not be as strong as it likely will be in Gilbert and other East Valley communities, the residential impact here stands to be just as strong as it will be elsewhere.

That means, Henderson said, that as long as the national or international economy doesn’t tank, home prices in Ahwatukee will remain high and likely get higher because interest in the community will be high.

And Intel employees earn enough to put their money where their interest is.

He said he would not be surprised if high-end developers take an interest in the State Trust Land either.

Although trust land sales can benefit 13 different state entities, including the Department of Corrections, a Land Department spokesman said the proceeds from the Ahwatukee auction will go entirely to K-12 education.

The land’s proximity to the South Mountain Freeway also makes it an ideal site for future Intel workers, since it provides an easy connection to a campus that’s not far from the Loop 101 Price Freeway.

Intel’s investment is part of its “IDM 2.0” Initiative – a major evolution of an “integrated device manufacturing” model that Gelsinger said makes Intel “the only company with the depth and breadth of software, silicon and platforms, packaging, and process with at-scale manufacturing customers can depend on for their next-generation innovations.”

“IDM 2.0 is an elegant strategy that only Intel can deliver – and it’s a winning formula,” he said. “We will use it to design the best products and manufacture them in the best way possible for every category we compete in.”

Assisted by unspecified federal incentives from the newly passed CHIPS for America Act, which is designed to grow domestic semiconductor manufacturing, Intel’s expansion aims for an even bigger global market share in the fiercely competitive semiconductor industry.

It also comes at a time when the Biden Administration is encouraging domestic manufacturing growth in an industry beset by a worldwide semiconductor shortage.

Automakers and medical device manufacturers, among others, have been pressing for federal investment in domestic semiconductor production.

Chip shortages are disrupting digital manufacturing, from electronics to medical devices to technology and networking equipment, according to the Harvard Business Review and other sources.

Particularly hard hit is the automobile industry, the Review said, reporting that “automakers were slow to order more semiconductors and then lost out to more nimble electronics manufacturers.”

“This means the automotive industry now must face the competing demands of all other industries, including those in electronics and those adding internet connectivity to their products.”

The strategy Gelsinger unveiled showed Intel’s determination to come to the rescue before competitors like Samsung Electronics and AMD can beat it to the punch.

“Overall, there are strong winds that are forming for expanding, accelerating and seeing the critical role that semiconductors play for the entire tech industry and, frankly, for the world as everything is becoming more digital,” Gelsinger said.

“And we are saying Intel is stepping into that gap aggressively to help provide the capacity that’s needed – U.S., Europe and worldwide.”

The plan outlined by Gelsinger includes a research partnership with IBM, which the corporation said in a release “will help unleash the potential of data and advanced computation to create immense economic value.”

Gelsinger also announced the creation of Intel Foundry Services at the Ocotillo campus to support commercial customers as well as address unique government and security requirements in the U.S.

He pointed out that geography and proximity figure heavily in that.

“Existing and prospective Intel suppliers can connect with our economic development team for assistance with office and industrial space site selection in Chandler,” said Miranda.

Intel celebrated 40 years in Chandler last year and it opened Fab 42, a $7 billion investment that created the most advanced manufacturing facility in the world, Miranda noted, stating that once the two new fabs come online, more than 15,000 Intel employees will be working in Chandler alone.

Miranda also noted that the economic ripple effect from the jobs Intel’s expansion will generate well beyond city boundaries and impact scores of industries that may not necessarily support chip manufacturing – but will support the people who make them.

That means everything from restaurants to retail could benefit.

But all those new employees and business owners have to live somewhere.

That means major challenges, especially for the East Valley’s and Ahwatukee’s housing market, where there already is a critical shortage of inventory for both resale and new homes.

As real estate experts have repeatedly pointed out in recent months, much of the developable land in East Valley has already disappeared.

Chandler and Gilbert quickly are approaching build-out and only large tracts of state land in far east Mesa are ripe for major residential construction in the region.

The ongoing widening of I-10 between Chandler and Casa Grande suggests Intel’s expansion also will impact already robust housing development in Pinal County, from Maricopa to Eloy and beyond.

While new building permits issued last year were at the highest level in nearly a decade, the inventory of existing and new homes for sale has been so low that some experts say they’ve run out of adjectives to express their alarm.

And its not just home sales that have been impacted, according to the Cromford Report, which tracks the housing market in the Phoenix metro area on a daily basis.

“The situation with rental listings is no better,” Cromford said last week. “Year to date we have seen 15 percent fewer new rental listings (excluding short term rentals) compared with 2020. Over the last four weeks, the comparison with 2020 reveals a decline of 24 percent, an unusually large deterioration in new supply.

“As a result, the number of active rental listings is down to just 1,492. We had 2,297 on March 23 last year, so we are down 35 percent in the last year. The long-term average is 4,864 and the shortage explains why rents are rising so rapidly with no sign of relief for tenants.”