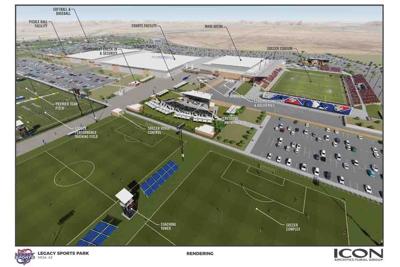 Randy and Chad Miller have a big sports and entertainment dream for southeast Mesa near Phoenix-Mesa Gateway Airport.

At 320 acres, that dream is expansive – but Chad Miller insists it’s not fanciful.

But with such an ambitious project, it’s predictable that Legacy Sports Park needs to solve some unresolved challenges – an annexation by the city, a zoning change, an assured water supply and a major upgrade to Williams Field Road – before a building permit can be issued.

While this list is substantial, Chad Miller, a former minor league catcher who played for Gilbert’s Mesquite High School, doesn’t consider any of these requirements an obstacle.

Miller is so confident that he has scheduled a ceremonial grand opening on Sept. 18, knowing that he has a top zoning attorney, financing for the $250-million project and a lease on the land near Ellsworth and Pecos roads.

The property is at the southern tip of the former General Motors Proving Grounds, a spacious 5,000-acre expanse of land that already is home to two upscale master-planned communities, Eastmark and Cadence.

“The money is already in a trust account and the land has been secured’’ through a lease, Miller said. “Everyone from the city has been very supportive, helping us get this completed. There has been no opposition.’’

Although an adequate water and construction of Williams Field Road are critical for the development to proceed, Miller said they are not insurmountable requirements.

His most immediate first step is start grading the property.

“When you have the money and you have the land, it’s just the details that need to be worked out,’’ Miller said. “We are prepared to do what we need to do, to bring this project to fruition.’’

Miller views his project as more varied and flexible than Mesa Plays, a Visit Mesa proposal that focused on attracting regional and national soccer tournaments to expanded facilities at Red Mountain Park in northeast Mesa.

The concept was to attract tournaments and to take advantage of sports tourism, with children on club teams and their families coming to Mesa and spending money on hotels and restaurants.

Although Mesa voters approved millions of dollars in bonds in 2018 on a series of quality of life-oriented improvements, they also shot down Mesa Plays, creating an opportunity for Legacy Sports Park.

In contrast with Mesa Plays, Legacy Sports Park potentially provides facilities for more than 15 sports at multi-purpose fields, including an 8,000-seat stadium that could be used for field sports such as soccer, rugby and lacrosse.

The indoor facility would be oriented toward basketball, volleyball and health and fitness classes, including yoga.

“This is a multi-purpose sports complex and an entertainment district. These are events that will drive people from all over the Valley,’’ Miller said, with stadiums and other venues built to handle festivals and other special events, placing an emphasis on flexibility.

“I think the biggest differentiator is the entertainment aspect,’’ he said. “When you have something great for the community, everyone wants to get behind it.’’

Legacy Sports would already have the proper zoning if it were to remain in Maricopa County as a county island, he said. The project would receive the closest zoning equivalent in Mesa, light industrial, by virtue of annexation on 245 acres.

The remaining 75 acres will require a rezoning to light industrial as well, which Gilbert does not perceive as much of an issue.

“Frankly, I think the zoning and annexation are going very smoothly,’’ Gilbert said. “We still are in detailed negotiation with the city on the water and Williams Field Road.’’

“Those ballfields will need a lot of water,’’ Gilbert said.

While Mesa has a $100 million transportation bond issue coming before voters on the Nov. 4 ballot, with much of it designated for southeast Mesa, Williams Fields Road is not included, Gilbert said.

That leaves the developer and the city in negotiations for who will pay for a potentially costly construction, he said.

The Legacy Sports proposal is under review by the Mesa Planning Department. Gilbert said he is hoping to make a presentation to the Planning and Zoning Board sometime in October.

Rich Adams of Visit Mesa is a big fan of Legacy Sports Park and is hoping all the details can be worked out.

Mesa Economic Development Director Bill Jabjiniak also is enthusiastic about the project’s potential and is hoping for great things ahead.

“It ratifies our vision’’ with Mesa Plays, Adams said. “I think Visit Mesa sees it as a huge opportunity. I absolutely think it’s a great idea. It’s exactly what we were hoping for with Mesa Plays and more.’’

Jabjiniak said he first met with the developers of Legacy Sports Park a year ago and was impressed by their plans.

“You have to dream big to accomplish big things,’’ Jabjiniak said. “If they can pull it off, this is a home run.’’

He said the project would create excitement not only locally, but nationally.