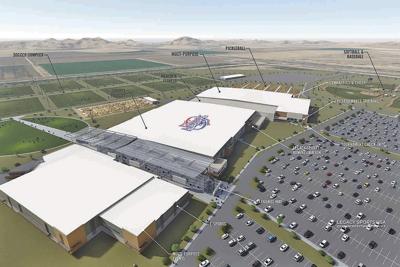 Those who complain “there’s nothing to do in southeast Mesa” should take note of the 330-acre Legacy Sports Entertainment Park – and prepare for a major change to that sleep scene starting this fall.

Check, dozens of fields spread over scores of acres.

But what about for older folks, who love their pickleball?

Got that, too, with a 40-court complex for p-ballers.

Not everyone is crazy about sports, what’s the entertainment part?

“One of the things we pride ourselves on is it’s not just a sports complex but a true entertainment district. There’s going to be something for everyone from 5 to 95, whether you play sports or just want to go out and walk around and hear music. We have an entertainment corridor, we’ll have live music three to four nights a week,” said Miller, who speaks with the speed of a sprinting base runner.

Like a third base coach windmilling his arms, Mesa City Council waved Miller and company home, giving approval to zoning and annexation plans for the complex at its March 15 meeting.

Google has yet to move forward on a $1 billion development not far from Legacy.

And remember Gallery Park? At Highway 202 and Power Road just west of Eastmark, the project’s website promises “Gallery Park will bring Class A office space, two hotels, luxury apartments, restaurants, retail and entertainment to the Southeast Valley” — opening in the first quarter of 2020.

But Miller’s project looks to be more on the Cadence and Eastmark paths, to name a pair of huge, complex projects that hit their timelines for expected completions.

Legacy is in the final stages of having its 330 acres near East Pecos and South Ellsworth roads annexed into Mesa, though the land is currently a county island.

Not wanting to wait for annexation, the Millers – Chad, younger brother Brett and father Randy – charged ahead, getting approvals and permits from Maricopa County to start turning dirt.

“This is going. We’re under construction,” said Paul Gilbert, an attorney representing Legacy. “We have commitments from people that will want to use the facilities. They want to start using our facilities in November – of this year.”

Miller said that while some tournaments will take place in November and December, Legacy’s grand opening is scheduled for Jan. 2, 2022.

The developer is leasing 330 acres – the owner is  Pacific Proving – at Ellsworth and East Pecos roads, just across Ellsworth Road from Phoenix-Mesa Gateway Airport and on the south end of Eastmark

According to its council presentation, Legacy will be “a state of-the-art premiere family sports entertainment park facility combining athletics, sports and entertainment into one destination center that will be the largest privately-owned multi-sport facility in the Western United States.

“The project will be the largest sports project in the United States behind the Las Vegas Raiders and the Los Angeles Rams/Los Angeles Chargers new facility projects.”

Chad Miller lives in North Scottsdale but knows the Southeast Valley inside out, as he spent his boyhood playing ball here before graduating from Gilbert’s Mesquite High School in 2003.

Miller, who played a few years of minor-league baseball, said this is a big-league operation that has been brewing since he was a kid.

“My father came up with this concept 28 years ago. I came on board six years ago,” he said.

The family is building their dream, with $250 million in financing. “It’s 100 percent privately funded,” said Miller.

Miller has seen the 1989 movie “Field of Dreams” many times, but don’t call him a Kevin Costner listening to whispers in the corn fields.

“People are going to come in from all over the country and the world. Once these doors get open, we’re going to be near 100 percent occupancy.”

Though not technically part of Mesa, as Council must present the annexation for public comment and approval again at its next meeting, Miller said the city “has been great” to work with.

“Kevin Thompson’s been a huge supporter of ours,” Miller said.

Thompson, a councilman who represents southeast Mesa, returned the compliment: “They hit the ground running. I’ve been really impressed with their movement.”

He said the Legacy Sports and Entertainment Park is a different ballgame than the big-talking projects that fizzled.

“When you got people sticking shovels in dirt,” Thompson said, “that’s a good thing.”

And, the councilman added, Eastmark, Cadence and others who live around Mesa will have a big entertainment option: “I think people are going to be excited to visit Legacy and partake in the activities.”