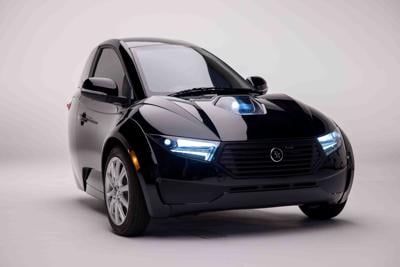 According to a report by industry analyst Blast Point, 345,000 electric vehicles were sold nationally during pandemic dominated 2020, – up 40 percent from 2019 with Tesla, Nissan and Audi as top sellers leading the way.

ElectraMeccanica just invited itself to the electric vehicle party.

Landing in Mesa near the Phoenix-Mesa Gateway Airport, the Canadian company will construct a 235,000-square-foot facility on Ray and Hawes roads, where it plans to produce up to 20,000 Solo electric vehicles per year.

And, of utmost importance to the likes of Councilman Kevin Thompson, the plant will employ as many as 500.

“It’s pretty awesome to be selected as their base of manufacturing,” said Thompson, who represents southeast Mesa. “It brings jobs and creates interest.

“Little Mesa’s on the map again,” Thompson added, with a chuckle.

Indeed, the buzz of the first electric vehicle plant in Maricopa County – Lucid Motors has a production facility in Casa Grande – made headlines and TV news across the region.

The leader of the state joined in on the round of congratulations.

“Arizona is thrilled to be selected as the home of ElectraMeccanica’s first U.S.-based assembly facility and engineering technical center,” Gov. Doug Ducey gushed. “My thanks to ElectraMeccanica, the Arizona Commerce Authority, the city of Mesa and all involved in bringing this exciting project to Arizona.”

“We chose Mesa as they offered us the best overall comprehensive proposal that includes best site, best land, best option for workforce. This coupled with the logistics benefits gave it the edge above the other states,” ElectraMeccanica CEO Paul Rivera said.

A hard flip from SUVs and kids-toting vans, Solos have three wheels — and only one seat.

With a range of 100 miles and top speed of 80 mph, Solos are designed for single commuters. Though yet to hit the market, the mini-electric vehicles start at $18,500.

The company is taking “reservations” at electrameccanica.com.

Rivera said the jobs here will be a mix of high-tech and blue-collar.

The Mesa plant, he said, “will feature a state-of-the art engineering technical center, including plans for multiple labs to support ongoing vehicle, chassis and power electronics testing as well as comprehensive research facilities.

“We intend to start hiring for engineering positions in the next couple months.”

He said construction should be complete by next March, and Solos should be whizzing out of the Mesa site by late 2022.

“We have executed a long-term lease and are mobilizing on-site for planning and preliminary construction,” Rivera said.

Thompson noted the hot intersection of highways 202 and 24 is still percolating.

“We have another big project we’ll announce in the next couple of months,” he said.

Google’s plans for a massive facility in the Elliot Road Technology Corridor have stalled, however.

Before building a data center, Google is “still working on an electric substation,” Thompson said.

Two years ago, Thompson and the rest of the Mesa City Council approved Google’s plan for a $1 billion, 187-acre campus at Elliot and Sossaman roads.