It’s been about five years since the office tenants started moving out of an 11-story building on the southeast corner of Central Avenue and Camelback Road. In just over a year, tenants are expected to start moving in to luxury apartments.

During the past 18 months, passersby have noticed the uniquely-shaped BMO Harris bank tower, called One Camelback, being gutted. All the glass and concrete panels were removed from the building’s exterior and nothing but an elevator was left inside.

Now a blank canvas, the building’s new owners and development team are ready to turn the structure into some of the highest-priced apartments in the Valley.

Originally P.B. Bell Cos. was brought on to develop the apartments in 2015, but things didn’t go as planned. In 2018, the building was sold to its current owners – a group of six buyers including Scottsdale-based investment firm Sagamore Capital LLC – for $14 million.

Charles Dubroff, principal of Sagamore, told the Business Journal he’s been approached about being part of a number of projects, but he wanted to do something he believed was “iconic,” which was behind his involvement with One Camelback.

“The views are absolutely spectacular,” Dubroff said. “I wasn’t scared off about making a significant change, rather than just doing something cosmetic. My goal was to develop something that was special.”

Sagamore brought on Stellar Residential to manage the property. Project financing was arranged by Walker & Dunlop and provided by Los Angeles-based Acore Capital LLC. Dubroff declined to say how much the entire project will cost, but in February 2020 Acore provided a mortgage of $56.3 million for the building, according to real estate database Reonomy.

Katerra is the general contractor and prime supplier for the One Camelback project. Construction is expected to be done in the first half of 2021.

The 215,245-square-foot-building will be turned into 163 luxury apartments. Plans call for 16 different floor plans with units ranging from studios to three bedrooms. The project was designed by Erwin Architecture.

Dale Phillips, president and founder of Stellar Residential, told the Business Journal rents would be about $3 per square foot, with its penthouses on floors 10 and 11 going for about $10,0000 a month. That is well above the Valley’s average apartment rent prices.

“We’ll be pushing the ceiling of Phoenix’s rents,” Phillips said.

To charge that much, Phillips knows the units have to offer a lot. Each apartment will have exposed ceilings and floor-to-ceiling windows offering views of Camelback Mountain, downtown Phoenix and South Mountain or of the Valley’s noteworthy sunsets. 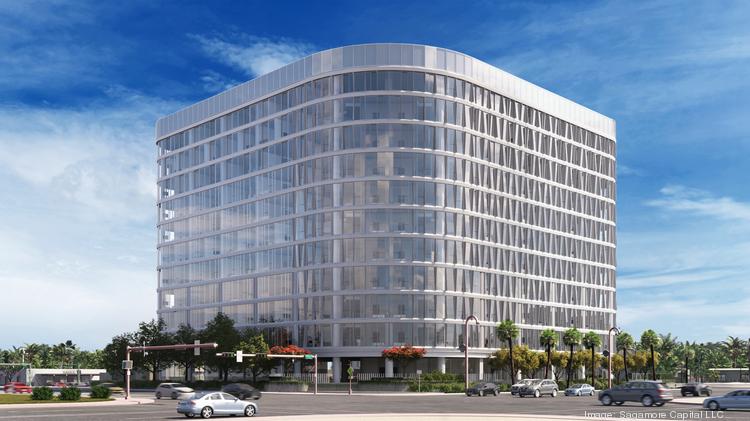