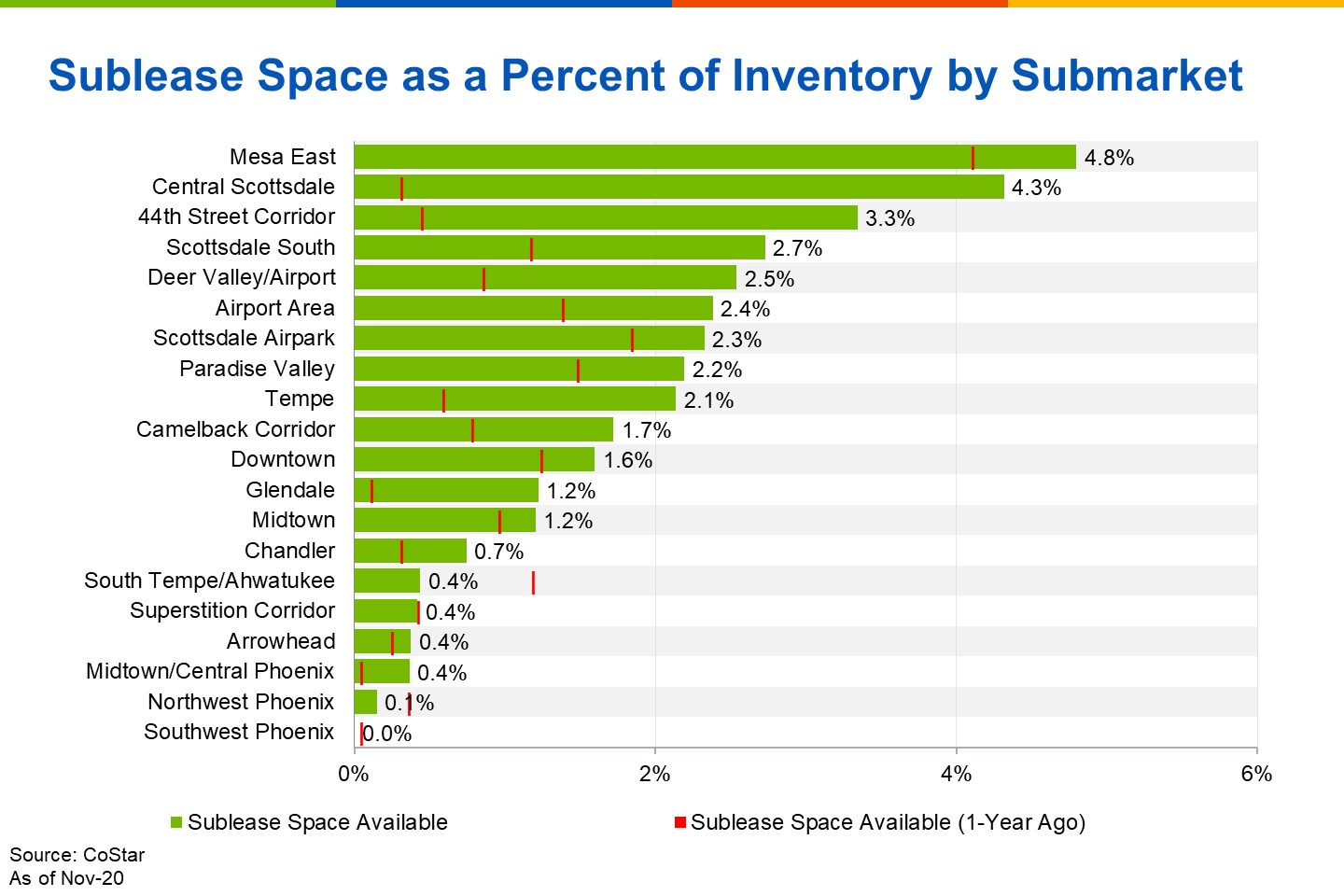 Office sublease availabilities are rising across the country, and Phoenix is no exception.

Since the end of 2019, available sublease space in the market has climbed from 1.7 million square feet to a market high of nearly 3.3 million square feet. The rise in sublease availabilities has been especially notable in technology hubs such as San Francisco, Seattle and Austin, Texas. But it’s not just technology tenants that are offloading space for cost savings. Sublease space is also increasing in New York, Boston and Dallas.

For the most part, sublease availabilities have risen more sharply in Phoenix’s pricier areas, except for the Mesa East submarket, which leads in the ranking for sublet space as a share of inventory. In Mesa East, one sizable sublease became available this year at The Union, a speculative office project that’s set to deliver in January. WageWorks signed a 150,000-square-foot lease in the third quarter of 2019 but later listed the space for sublease this summer. Aside from Mesa East, submarkets with rents above the overall market average, including Central Scottsdale, 44th Street Corridor and Scottsdale South, have the most space available for sublease as a share of the submarket’s inventory.

The upswing in sublet availabilities in Phoenix could negatively impact net demand in the near term. It also presents more options for tenants searching for space in the market. Sublease space is typically offered at a discount to direct leases, and reduced rents removes some barriers in more expensive submarkets for tenants. The sublease markdown generally varies from 5% to 35% in Phoenix and is based on lease term, building quality, location and lessor motivation. In Central Scottsdale, available sublease space accounts for 4.3% the existing inventory, up from just 0.4% one year ago. The largest sublease opportunity here is at Riverwalk Arizona near the 101 and Via de Ventura. In the third quarter, the Scottsdale-based travel company International Cruise & Excursions made its 150,000-square-foot office building available for sublease at about $25 per square foot gross, according to CoStar data.

Sublease availabilities are anticipated to grow over the next few quarters as office occupiers rethink space use. The rise in availabilities could increase competition in the market and limit rent growth in direct marketed office space.