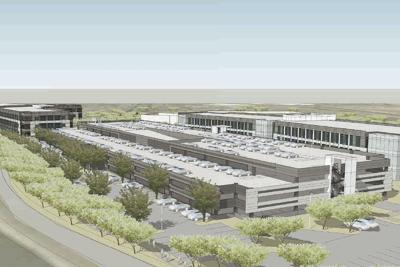 In most cities, the expansion of an office park would fall into the “no big deal” category.

Neighbors heatedly oppose a request by a developer for an office building and garage near Riverview that Mesa City Council is scheduled to vote on at its virtual meeting at 5:45 p.m. Monday, March 15.

The key word in the last sentence is “scheduled.”

The developer’s request was introduced at the March 1 council meeting. Though Council did not vote on the matter, several people who live near the 30-acre office park at Alma School Road and Bass Pro Drive vehemently demanded the elected officials reject the plan.

Shawna Boyle said the plan for a three-story office building and four-story parking garage not only would wreck views, it would also violate “a written agreement … from 2007 that promised residents all the buildings would not be any taller than two stories.”

There are currently four office buildings in the development at Alma School Road & Bass Pro Drive. The first two, both two-stories, went up in 2007. Two more were built in 2014; neighbors complained that the view-disturbing three-story office buildings received “administrative approval” and they were not informed about it.

Shawna Boyle’s husband, Joshua Boyle, noted in an email to the Tribune the project changed hands since the expansion.

“The current developer is now pointing to the three-story building as their main argument why their proposal should be approved,” he said. “Our position is that because the city failed to properly follow its own rules in 2014, and failed to protect its citizens, then it should not simply allow for that to keep happening.”

“The developer is pointing to a wrong that happened as justification for it to continue doing the same thing and construct new buildings higher than the original plan.”

He pointed to statements from the original developer, taken from minutes of a 2007 meeting.

“While the neighbors were not guaranteed the amount of buildings, lot coverage of the buildings, or lot yield, there was a guarantee that it would not go above the 38 (feet) height. The city required the developer to comply with this,” Joshua Boyle said.

The three-story building that went up in 2014 is 55 feet high. Another proposed office building is also three stories and 55 feet. The garage is four levels and 44 feet high, according to the proposed plan.

The Planning and Zoning Board unanimously approved the developer’s new plan in February.

But Shawna Boyle insisted at the March 1 council meeting, the board would have rejected it, if they knew about the previous agreement.

Countered Adam Baum, attorney for the developer, “I have not found any agreement that would limit this to less than three stories … We’re not aware of any restrictions the neighbors allude to.”

Baum added, “We’ve been open and willing to work with neighbors.”

Not so, said resident Doug Allsworth, who begged council to heed the complaints.

“It seems the wheels are pretty well greased,” Allsworth complained. “The neighbors feel they have been run over.”

Councilman Mark Freeman was part of a unanimous decision to move the matter ahead to the March 15 meeting for a possible vote.

But, he added, if neighbors need more time to find documentation, “I will support giving you more time.”

“I’m not aware of any agreement,” Smith said. “The council’s not a court of law so it’s not enforcing private agreements … But if (neighbors) find documentation they want to provide,  we’d be obviously very happy to look at it.”

But neighbors may face a challenge, as several members of the council voiced support for the developer’s plans at a March 11 study session.

“The property owner has the right to build. If that affects the view, I’m sorry,” said Councilman Kevin  Thompson.

“To stymie economic growth and bringing quality jobs just so you can have a view of the mountains is beyond belief,” Thompson said. “I like the project and I’m ready to move forward.”