As construction on downtown Phoenix’s highly anticipated Block 23 mixed-use development winds down, the number of tower cranes in the city’s central business district has decreased, but construction activity in the area continues to be strong.

“Phoenix is not a city that does a huge amount of high-rise development,” said Scott Macpherson, executive vice president of Rider Levett Bucknall, which completes a crane index that is produced twice a year and counts the number of stationary tower cranes in 13 major markets in the U.S. and Canada during the same period of time, in this case the month of May.

There are three tower cranes in place in Phoenix’s central core, according to this period’s count. One is being used for a hotel, one is for a mixed-use project and the third is for a residential development.

The study counts the tower cranes in place within a 6-mile radius from the Central Avenue and Washington Street intersection, so Tempe, which is home to a few high-rise projects under construction, is not counted.

Macpherson said generally a building taller than five stories will require a tower crane, so counting the cranes can be an indicator of the scale of projects under construction in a city. Despite a decrease in the number of cranes in Phoenix, Macpherson said the low- and mid-rise construction in the area continues to boom. 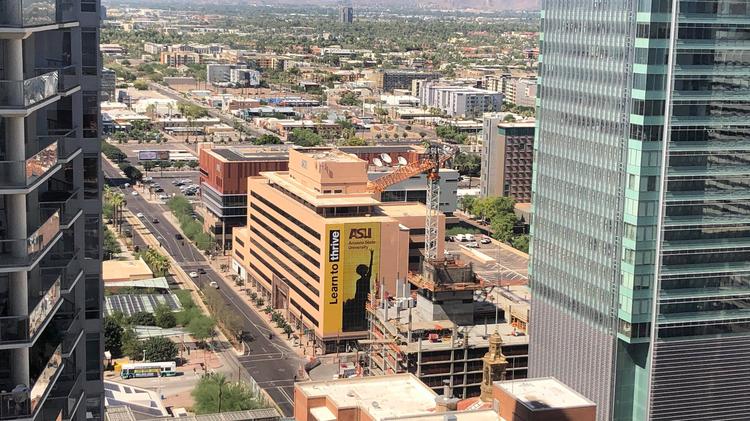 A tower crane is in use for a 23-story mixed-use development under construction at Central Avenue and Polk Street.