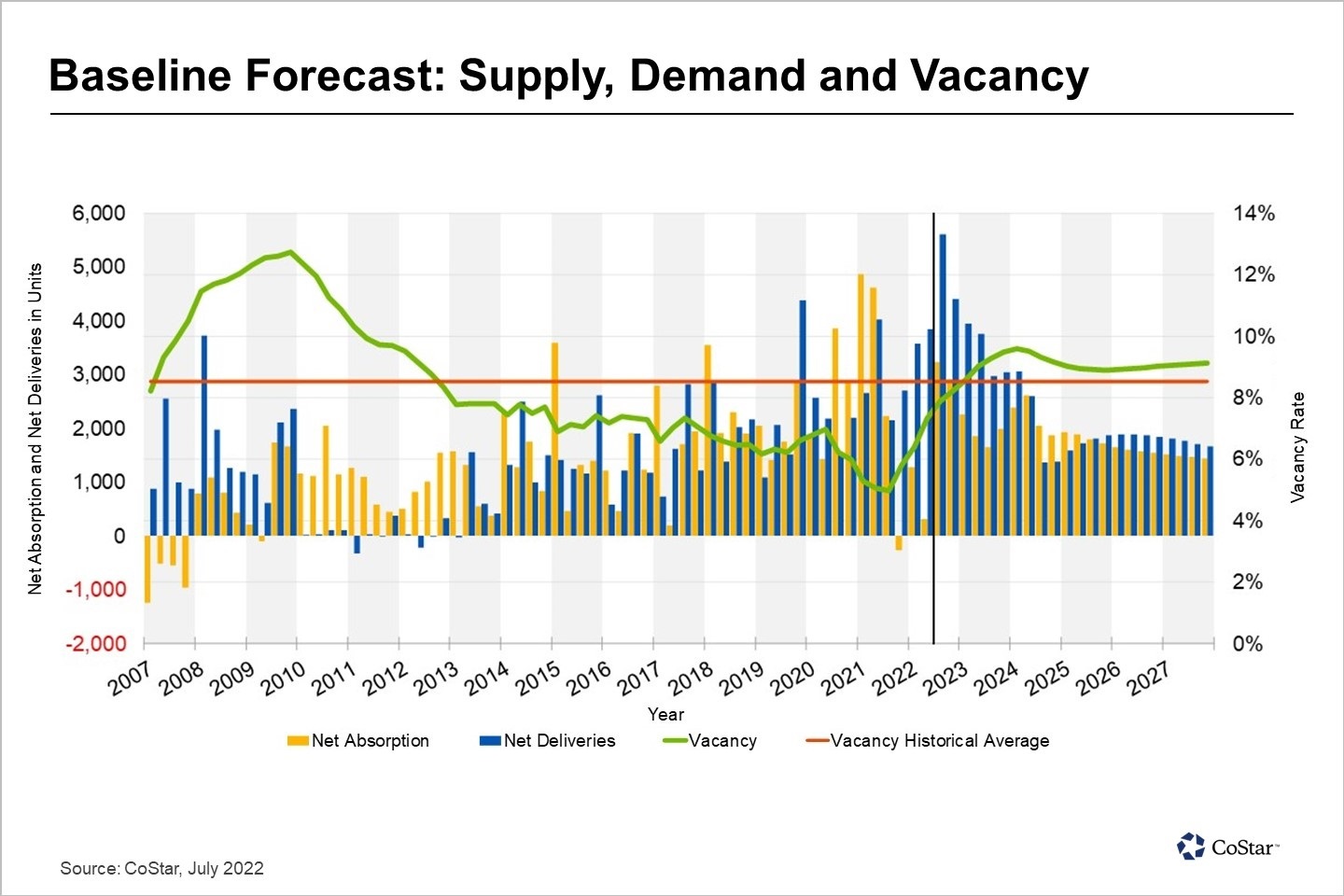 Robust job and population growth have fueled a hot real estate market in the Valley of the Sun. In-migration trends here are among the best in the United States in part due to Phoenix’s proximity to Southern California. And apartment builders have plenty of units in the pipeline for newcomers.

After Phoenix apartment vacancies hit an all-time low around 5% last year, new deliveries have significantly outpaced demand and caused a spike in the vacancy rate to 7.5% in the second quarter of 2022.

Inflation may be affecting household formation and leading to weaker demand. The lapse of the eviction moratorium late last year has also played a role in bringing more units off the sidelines.

Supply pressure will continue to put upward pressure on vacancies in the near term. Roughly 30,000 units are under construction, and about 15,000 units are slated to be built in 2022. This would be a roughly 50% increase on last year’s completions and makes Phoenix one of the most aggressively built multifamily markets in the country.

In-migration has driven Phoenix’s rapid population growth in the past decade and will need to continue to stabilize the apartment market. Phoenix gained 70,000 new residents from outside of the metropolitan area in 2021, according to U.S. Census Bureau data, well above the 10-year average of about 60,000. Like most of the United States, natural increase is accounting for a smaller proportion of population growth in Phoenix.

Tight market conditions allowed landlords to raise rents aggressively as rates increased by more than 20% last year, one of the highest in the country. But rent growth has clearly moderated with annual gains at 18.5% in the first quarter and near 10% in the second quarter.

With rent growth still in the double digits, some tenants are feeling the squeeze more than others. The average market rent is still around $1,500 per unit, accounting for 25% of the metropolitan area’s median household income. This ratio remains favorable compared to many coastal markets, and investors are betting on in-migration flows to remain steady.

Over $15 billion worth of Phoenix apartments traded in 2021, a record high, and more than $8 billion has traded so far in 2022. Interest rates have done little to deter transaction volume up to this point. Investors see the long-term advantages offered with strong multifamily demand combined with rents growing above the national average.

In the near term, new construction will have a large impact on the Phoenix multifamily market. Employment and household formation will need to continue their torrid pace to help mitigate upward pressure on vacancies. Rent growth is likely to moderate but remain markedly positive.