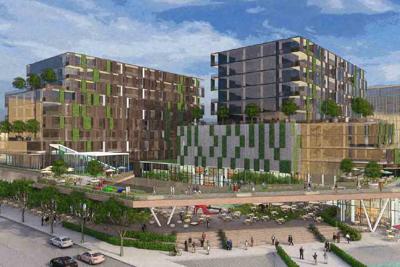 Bars and clubs in downtown Scottsdale could give way to hotels, office space and retail shops, according to redevelopment plans submitted to the city.

The plans give the clearest picture yet of The Scottsdale Collective, a major redevelopment, first reported by the Progress last December, that could significantly reshape the city’s downtown Entertainment District.

The project is the latest in a slew of redevelopment projects proposing to bring new 150-foot buildings to downtown Scottsdale, a phenomenon that has drawn criticism – and one referendum – from locals opposed to increased heights and densities in the area.

The Scottsdale Collective is the latest redevelopment from Shawn and Steven Yari of Stockdale Capital Partners, which owns much of the property in the Entertainment District, including the W Scottsdale hotel and the Galleria Corporate Centre.

The development would include a total of 580,000 square feet of commercial space for retail, restaurant, hotel and office space along with over 512 residential units, according to conceptual development plans

At a pitch to prominent locals last November, Shawn Yari said the project will diversify, not replace, the entertainment district.

“This isn’t a blank canvas. This is a successful entertainment area in downtown Scottsdale,” Yari said. “The opportunity is piece by piece, time to time, there’ll be a piece of that canvas available for me to develop.”

Overall, the plan calls for redeveloping 6.5 acres of Stockdale’s approximately 20 acres of property in the area and asks to rezone the area to type 3 commercial from a mix of type 2 and type 3 parcels, according to the development plan.

Current entitled heights in the entertainment district are all over the place, ranging from 34 feet at the southeast corner Scottsdale and Camelback Roads to 90 feet at The Stetson Apartments and 150 feet on the site of the Marquee office building.

Much of what would be redeveloped is tucked into three properties, including the parcel that fronts the Arizona Canal at the southeast corner of Camelback and Scottsdale Roads.

That plan has the parcel being developed as City Center, which would include over 200,000 square feet of commercial space and 146 residential units along with a public art and park space and heights up to 150 feet along Scotts-dale Road.

“You have essentially an elevated park at your signature intersection,” project spokesman Jason Rose said. “I think (it) is really going to have a wow factor and be a point of pride for the community.”

The project would also replace a number of existing clubs in the city’s entertainment district.

The first project “out of the shoot” would be a hotel on what is now the Dakota bar, Rose said.

The conceptual project plans also show hotels between 90 and 135 feet tall – along with space for restaurants, retail and office – going on the sites of The Mint and Maya Day & Nightclub.

When he pitched the project in November, Shawn Yari said he did not anticipate the same type of backlash that resulted in a referendum against Southbridge Two, a redevelopment that sought bring heights up to 150 feet to that area.