The rhythm of migration out of coastal areas with high housing costs into less expensive Sun Belt cities accelerated during the pandemic. Skyrocketing demand for apartments in markets such as Austin, Texas; Phoenix, Arizona; and Tampa, Florida, pushed rent growth to record highs. Pre-pandemic rent growth in the Sun Belt was already outpacing coastal rivals, but with double-digit increases over the past 18 months, one may begin to wonder if the region has retained its housing cost advantage. 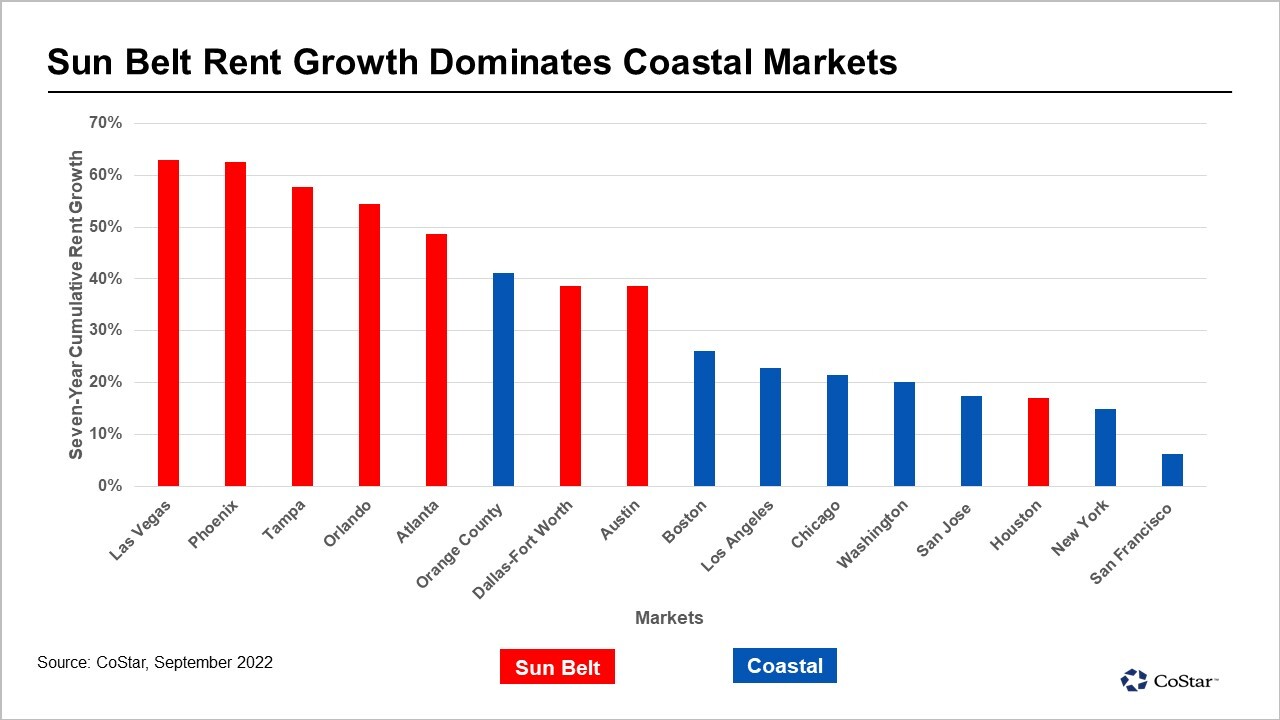 Despite the blistering rent growth over the past seven years, the Sun Belt retains an attractive rent discount for those relocating out of coastal areas. This becomes clear by reframing the analysis from focusing on rent growth to how much average rent a household pays each month for an apartment in those respective markets. Putting the emphasis on absolute rents finds that, in most cases, Sun Belt markets remain less expensive than coastal locations, and the difference in monthly rent over time has changed very little. 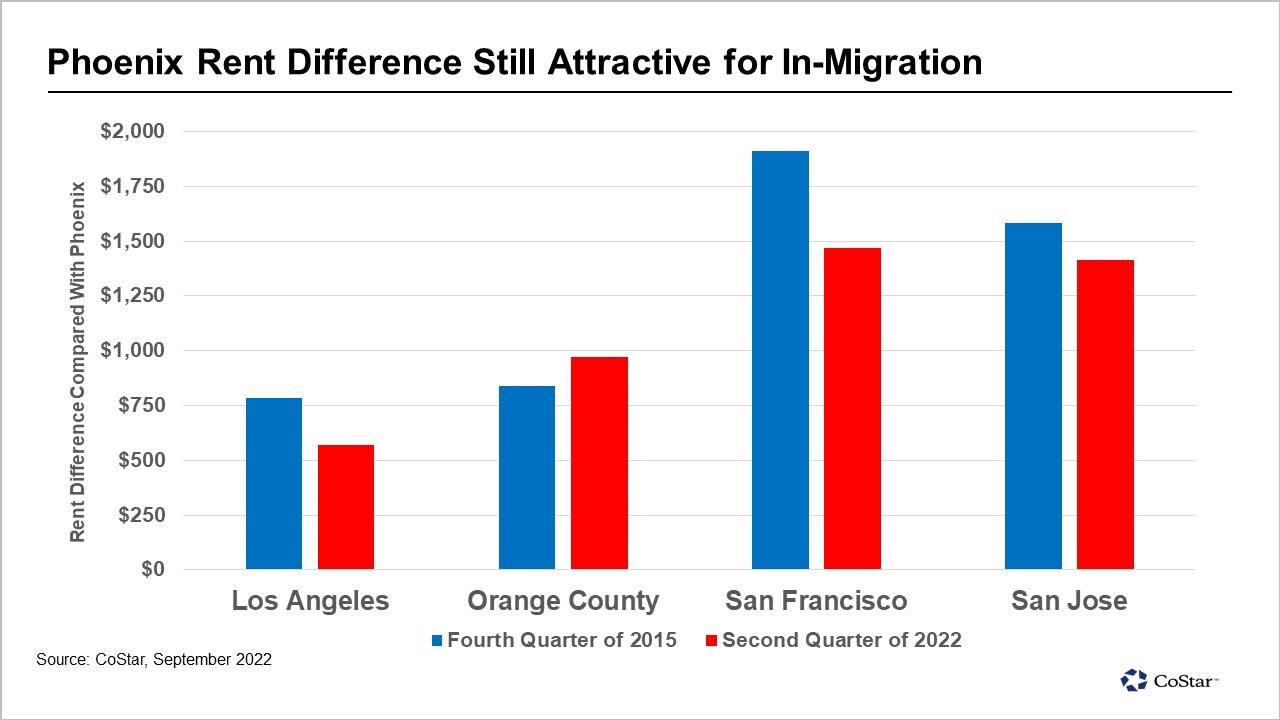 Comparing Phoenix’s average multifamily rent to major California markets over the past seven years shows that even with almost three times the rent growth, Phoenix remains a significantly less expensive place to rent. Moving from Los Angeles to Phoenix, on average, would reduce a household’s yearly rent cost by $6,000, while moving from San Jose would yield $17,000 in average annual rent savings.

Because Phoenix’s absolute rents remain almost half of those in California, Phoenix will remain a lower-cost housing alternative for many years. The math shows the advantage Phoenix has over markets such as San Jose. Phoenix’s average rent sits at $1,609 per month compared to the average in San Jose of $3,024. If Phoenix sees 10% rent growth, that will increase the rent by $161 per month to $1,770. At the same time, if San Jose’s average rent rises at just 5%, the increase paid by the tenant is almost the same at $151. Consequently, Phoenix will maintain its rental housing cost benefit for a considerable number of years even if it continues to outpace San Jose in terms of rent growth. 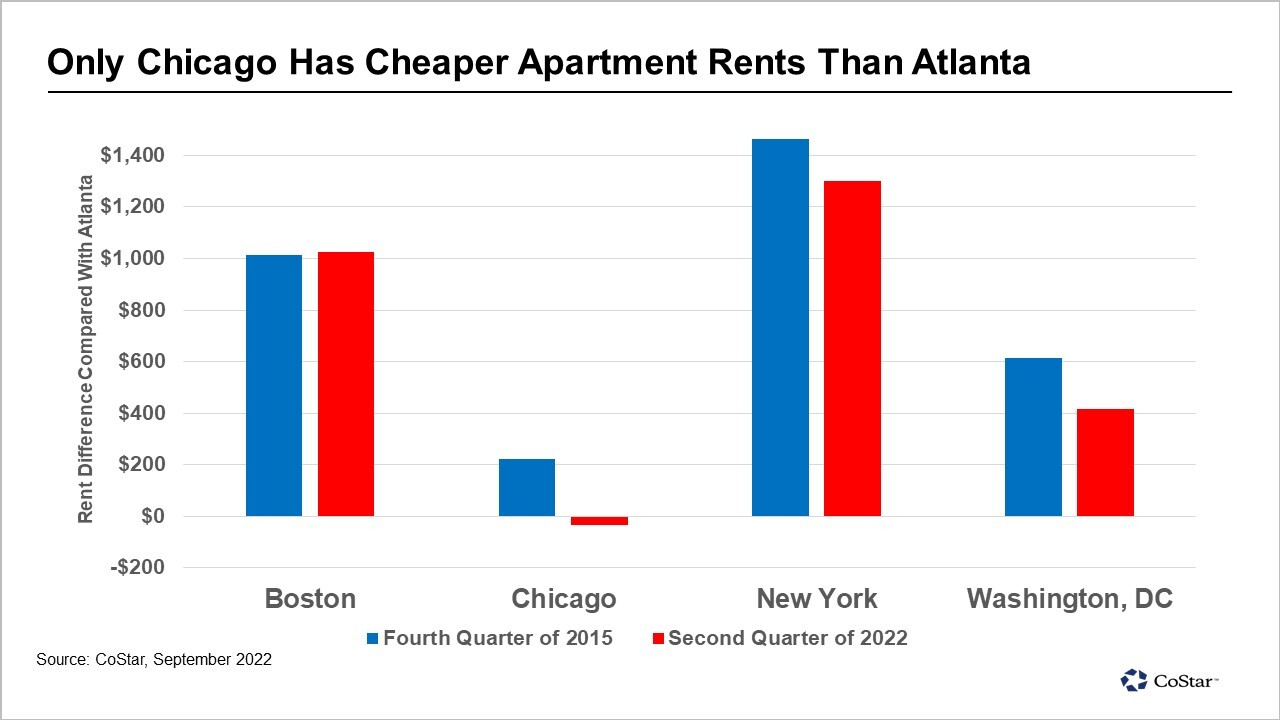 While Chicago obviously isn’t on the East Coast, we included it in our analysis due to similar regional economic and demographic trends observed in major East Coast markets, at least partially because of the Great Lakes. For example, Chicago’s high cost of doing business, low employment growth and high tax structure has been cited by both companies and individuals choosing to relocate to Sun Belt locations.

However, Chicago is the only one of the major “coastal” markets where the average apartment rent is lower than several major Sun Belt locations. A combination of lower average absolute rent and sluggish rent growth put Chicago in this unusual position. In 2015, average monthly rent in Chicago was $224 higher than in Atlanta, yet today it’s $33 cheaper to rent an apartment in Chicago than in Atlanta.

Even with the Sun Belt’s major markets witnessing meaningfully higher rent growth compared to coastal markets over the past seven years, locations in the Southeast and Southwest continue to reward renter households relocating from the coasts with much lower housing costs.