While in the midst of a robust expansion, Gilbert-based drive-thru healthy food chain Salad and Go has decided to increase its starting wage to $15 per hour and give existing employees a considerable pay bump as well.

The pay increase, which goes into effect June 29, is the latest in a series of moves that might seem contradictory to what is taught in a Business 101 course but have paid off for the company so far.

For the past two years Salad and Go has been lowering its prices. It wasn’t able to drop all prices at once, but over time the company has lowered the prices of everything on its menu by 20% or so, co-founder Roushan Christofellis told the Business Journal.

Today all of Salad and Go’s salads cost $5.74, with no extra charge to add chicken. A similar sized salad with the same quality of ingredients could easily go for twice that price in other quick serve or fast casual restaurants around the Valley.

By changing the price point, Christofellis said Salad and Go was able to attract new customers, as well as increase the number of visits from existing customers. To keep up with demand, the company has expanded its footprint significantly.

In June, Salad and Go opened a new location in Phoenix on the northwest corner of Northern and 19th avenues, and the company has plans to open other new stores in north Phoenix, Arcadia and Tempe. Christofellis said there could be seven or eight new stores opening before the end of the year and another eight opening in 2021.

The growth plan is to continue expansion across Arizona. Christofellis said she is also exploring opening in other states.

While expansion can be costly, Salad and Go’s model of drive-thru only is far less expensive than having a dining room.

That model actually played to Salad and Go’s benefit once the Covid-19 pandemic hit in March. Most restaurants had to either close up shop or dramatically change how they operated, but Salad and Go had to change very little.

While not altering operations entirely, Salad and Go started requiring employees to wear masks and to use hand sanitizer after every transaction, so Christofellis felt it was necessary to give out 10% pay increases during the crisis. But instead of taking that increase away, she said it seemed even more important to pay her workers a higher wage.

“The truth is, they deserve more than $15 an hour,” Christofellis said. “We can’t do that right now, but we’ll get there.” 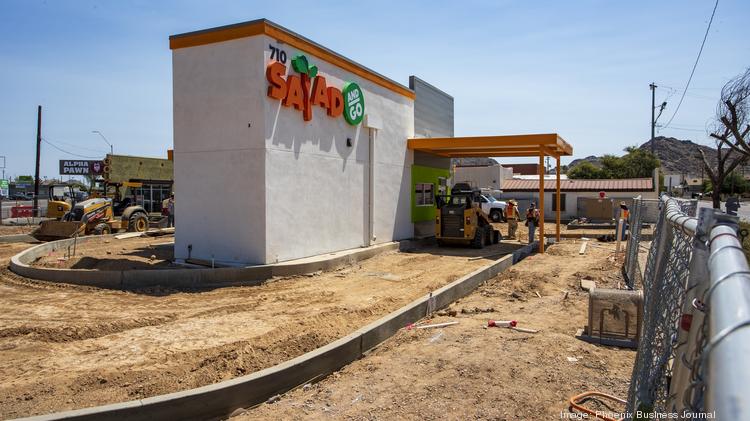