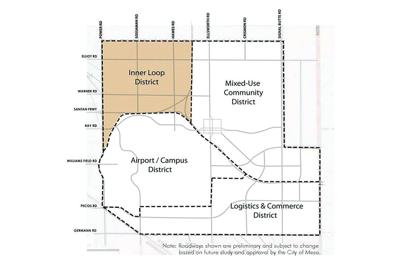 An east Mesa city councilman last week criticized a consultant’s report on the future of Phoenix-Mesa Gateway Airport, arguing it “would be a recipe for disaster’’ to allow housing in the flight path along Elliot Road.

Councilman Kevin Thompson’s comments came after a consultant outlined the city’s Inner Loop Master Plan, which covers the 3,100 acres closest to the airport.

It stretches from Power Road east, along a utility corridor to the north of Elliot, to the Loop 202 on the east and to Germann Road on the south.

The Inner Loop District, east of Power and south of Elliot, is mostly vacant while the northeast area is encompassed by a massive proposed mixed-use development called Hawes Crossing. The southeast is the SkyBridge project linked to trade with Mexico.

Leslie Dornfeld, a consultant with Plan*et Communities, said some sections of the study area fell into the higher noise category and were reserved for job creation.

A map showed the areas she described as being north of the runway and also to the southwest. The area to the northeast, in the lower noise area, included some residential housing.

Thompson’s concerns appeared focused on Hawes Crossing, which covers 1,100 acres about a mile to the northeast of the airport.

A group of longtime dairy farmers and the state Land Department is proposing zoning changes to allow construction of a master-planned development allowing for 56 percent nonresidential and 44 percent residential.

As City Council prepares at some point to vote on zoning changes related to Hawes Crossing, a debate has emerged between economic development advocates such as Thompson and proponents of a proposal to annex 900 acres into Mesa and control its development in a cohesive, appealing manner.

The dairy farmers find themselves at a crossroads with aging dairies sitting squarely in the path of development. They face a choice between investing millions in their facilities or selling their property and moving to more rural locations better suited to agriculture.

Thompson, who represents District 6 in East Mesa and hears planes flying over his own home in the Superstition Springs area, emerged as the airport’s most ardent defender.

“We have one shot to make this right. If we screw it up, we run the risk of damaging a major asset in the city,’’ Thompson said. “I have concerns about us allowing housing to be placed in a flight path. This council has always taken upon itself to protect against residential encroachment.’’

But Mayor John Giles vowed not to do anything to damage the airport’s operations and appeared to seek a compromise on smaller issues.

Giles suggested no housing be allowed along Elliot Road in Hawes Crossing, saying he wants to preserve its commercial appeal and access to high-voltage powerlines coveted by data centers and other businesses.

He said the high-density housing proposed by the consultant should be set back from the road and landscaping might form a buffer between the new housing and the existing Boulder Creek Elementary School and subdivision.

Jordan Rose, a zoning attorney representing the dairyman, said she has no problems with Giles’ suggestion and an easement already in the plan would allow other businesses to tap into the power lines and use it at another location.

An economic development advisory board had criticized the city for squandering the power lines, which could create jobs, on residential development.

“I think this is a good night for us,’’ Rose said after the meeting.

Comments by city officials and other council members showed support for Hawes Crossing, despite Thompson’s opposition.

“I thought this was a great reaction and a positive impression of our plan,’’ Rose said. “Our plan is exactly the same’’ as the Inner Loop Study.

She said the plan comprised more than 80 percent residential in its first iteration and has gradually morphed through 28 versions to a majority of non-residential purposes intended to grow jobs.

All of Hawes Crossing would be in Airport Overflight Area III, a unique category in Mesa requires sound attenuation in construction methods and disclosure to homebuyers stating noise from planes is likely.

But Rose argues nearly all of southeast Mesa is in Aircraft Overflight Area III, including Eastmark and Cadence, two other master-planned communities.

She said some residential is required to accomplish the city’s “live, work, play’’ approach for southeast Mesa.

“We were trying to take an extra step to mitigate against’’ future noise complaints, Brady said.

“It’s hard to get away from the Airport Overflight Area discussion. That’s what the FAA holds us to as far as noise,’’ Brady said. “There’s no doubt they are creating noise.’’

J. Brian O’Neill, the airport’s director and CEO, told the Planning and Zoning Board there is no regulation or study to justify airport opposition to Hawes Crossing.

But O’Neill did not exactly endorse it, either.

Instead, he issued a warning to expect noise complaints are likely after the original homeowners in the area sell and the property turns over to new residents who do not understand what it’s like to live near an airport.

A letter written by an airport official said noise considered by many as annoying would be likely in Airport Overflight Area III. Airport officials also have been speaking to council members about their views on Hawes Crossing.