Discount grocery store chain Aldi is expected to bring its national expansion to metro Phoenix, but plans for Phoenix-area stores appear to have slowed down.

Despite buying more than a dozen buildings in the Valley, permits with several cities have expired.

Locations that were expected to open late this year or early in 2020 don’t have expected opening dates anymore.

An Aldi distribution center in Goodyear could still be several years out, according to a city spokeswoman.

A Buckeye spokeswoman said the store planned there wouldn’t happen until after the distribution center is open.

Aldi spokeswoman Olivia Johnson in a written statement said the company doesn’t have “specific information about expansions or potential locations in Arizona,” although she said she would share that as “plans are solidified.”

She emphasized the expansion plans of Aldi, which operates more than 1,900 stores in 36 states.

“Through our aggressive national expansion plans, we’re on pace to become the third-largest grocer by store count by the end of 2022,” the Aldi spokeswoman wrote in an email.

The company purchased three acres at the southeast corner of Estrella Parkway and Roosevelt Street for a 19,738-square-foot grocery store and planned a regional office and distribution center in the growing Loop 303 business corridor.

“We believe the plans for this project are still several years out,” Vo wrote in an email. “Aldi is redesigning and upgrading their logistics facilities which is impacting their timeline for the Goodyear distribution facility.”

Buckeye officials have approved an Aldi near Interstate 10 at the intersection of Yuma and Watson roads.

The store was originally expected to open in early 2019, but the company will start building after its Goodyear distribution center is finished, city spokeswoman Annie DeChance said.

The chain has submitted plans for its other planned Phoenix location, at 14th Street and Bell Road. Planning and Development officials denied that plan, though, so the company will have to resubmit its plans.

Mesa’s Development Review Board in 2018 recommended a 21,750-square-foot Aldi grocery store planned for 2751 S. Signal Butte Road be approved. The store never went before City Council, which would’ve been the next step.

Aldi doesn’t have a construction permit yet and there’s no expected date to break ground, Mesa Senior Planner Lesley Davis said in an email.

Tempe officials approved a design to remodel an existing building at 1715 E. Southern Ave. for a 27,572-square-foot grocery store and for a training center next door at 1717 E. Southern Ave.

“If they were to come here, they’d have to start the whole process over again,” she said.

Plans in the northwest Valley have also stalled.

An Aldi in a new development on Lake Pleasant Parkway near Happy Valley Road was originally expected to open late this year or in early 2020.

The plaza as a whole is moving forward, but Aldi needs to resubmit plans for its building, Peoria Deputy Development Director Bob Goodhue said.

“The representative for the project told us they plan to move forward, but plans have yet to be resubmitted,” he said. “The plans expired on Aug. 7, 2019.”

Aldi officials are revising their plans and will resubmit them, though it’s not clear when, he said.

Chandler officials signed off on Aldi’s plans to remodel existing space on the northwest corner of Alma School and Queen Creek roads. Aldi hasn’t picked up the construction permit yet.

Aldi also proposed a 22,152-square-foot grocery store on the northwest corner of Queen Creek and Gilbert roads as part of the Rockefeller Chandler Crossroads development. The company hasn’t applied for a construction permit for this location, Romero said.

“Our staff has not been in contact with anyone from Aldi in months,” Romero said.

Aldi purchased a building at 1225 N. Arizona Ave. in Gilbert and the town’s Planning Commission approved a design for it. The company applied for a construction permit which hasn’t been approved yet, Town Planner Keith Newman said.

The Gilbert Planning Commission last December approved a design for a location at the southeast corner of Val Vista Drive and Pecos Road.

Aldi also purchased a building at 1821 E. Pecos Road, just west of Cooper Road, according to data from the Maricopa County Assessor’s Office. 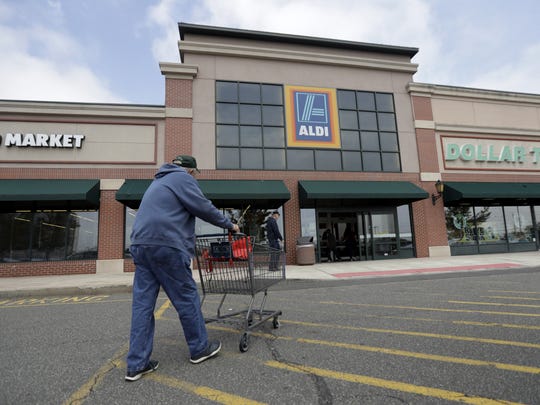