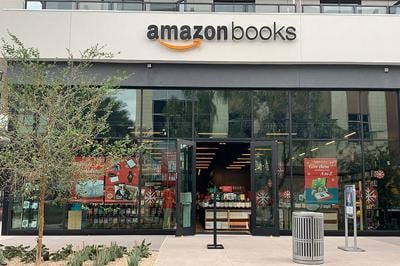 Amazon, long the most dominant retailer in the online world opened a new brick-and-mortar bookstore in Scottsdale – its 20th in a nationwide move in recent years.

The new Amazon bookstore at Scottsdale Quarter is the first of its kind in Arizona.

Upon first glance, the store looks a lot the previously shuddered booksellers, all of whom closed in recent years, en masse – due in large part to competition from Amazon.

The Scottsdale store is a clean, open space filled with tables covered by popular titles and walls lined with shelves separated into categories.

However, a closer look reveals Amazon’s fingerprints integrated throughout.

The stores are “a natural extension of Amazon.com,” said Drew Sheriff, director of Amazon Physical Stores.

And the tables with popular titles – actually hold selections of “highly rated” books selected from books with high reviews from Amazon online buyers.

Even how the books are arranged draws from Amazon’s consumer information.

One shelf includes tags showing consumers recommendations for lesser-known works they may enjoy.

Those recommendations are based on the reactions from Amazon’s users.

Every item in the store was curated by a team of professionals who draw from information gathered from the company’s properties.

“We have a team of curators that studies all of that information and selects every product,” Sheriff said.

For instance, the team will look at what titles are popular on Amazon.com, what is selling well to Kindle users and what books received high ratings on Goodreads.com, Sheriff said.

The Amazon bookstore also features non book-related products such as electronics and even kitchenware.

The new bookstores represent something of a full-circle turn for Amazon, which launched in the 1990s as an online bookseller.

“Books are in our DNA,” Sheriff said.

There is some irony in Amazon’s brick-and-mortar expansion, because it’s largely credited as the primary culprit in recent closures of retail stores.

The Department of Commerce’s retail sales report for February showed for the first time, online sales made up a greater proportion, according to a CNBC report.

Book store chains were hit especially hard by the decline in retail sales.

When Amazon announced it would open its first of 13 physical locations in 2017, it immediately became the fifth-largest bookseller by number of locations in the country, according to Publisher’s Weekly.

Amazon jumped to fourth on the list following the closure of Midwest store chain Book World.

Unlike the large chains, independent bookstores thrived in recent years despite an initial drop in numbers.

National Public Radio reporter Paddy Hirsch reported in 2018, the recent success of independents is due in part to decreased competition from major brick-and-mortar chains, like Book World and Borders, both went out business due to increased online competition.

According to the American Booksellers Association, its membership has grown for nine straight years and there are over 2,400 impendent bookstores in the U.S. as of 2018.