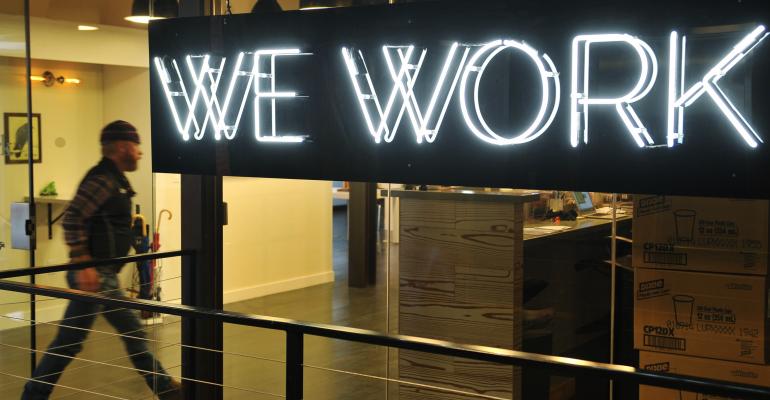 Troubled co-working operator WeWork has structured some leases under LLCs that are not guaranteed by its holding company, which will leave those landlords holding the bag for the free rent and TIs they provided to help get the spaces up and running. The landlords will also be left with vacant spaces, which may be backfilled with former WeWork tenants or another co-working operator at a lower price.

WeWork’s unprofitability and its derailed IPO reflect management’s failure to focus on the profitability of the core real estate business, Pascale notes.

The bailout by the Japanese company Softbank, The We Company’s biggest outside investor, required a management overhaul that replaced WeWork co-founder and CEO Adam Neumann with Marcelo Claure, a top Softbank manager. An analysis of the deal by the Los Angeles-based law firm Sklar Kirsh noted that Softbank will capitalize WeWork’s holding company, The We Company, a Delaware corporation established in July 2019. The We Company, through its partnership, holds all the WeWork assets and is subject to all the liabilities of WeWork Companies Inc.—the old holding company that guaranteed many WeWork leases, which should put SoftBank’s credit up the chain from WeWork Companies. The We Company holds an indirect general partner interest and indirect limited partner interests in The We Company Management Holdings LP—The We Company Partnership.

This analysis is based on information provided by a WeWork press release on Oct. 22, 2019, and its SEC S-1 filing on August 1, 2019 and assumes the structure of the company has not changes since then. The SoftBank-WeWork agreement is not currently publicly available.

They saw it coming

When NREI surveyed its readers about their outlook on WeWork’s profitability and business model in September of last year, many respondents pointed out the obvious mismatch between the long-term leases the company was signing and the short-term subleases WeWork was offering its tenants. They brought up flexible space provider Regus and its 2003 bankruptcy filing as an example of what happens when a short-term space provider expands too fast and then comes across financial challenges or a downturn. “WeWork is only surviving for two reasons: they are able to continually raise equity from gullible investors and they are living off 12 months free rent in new leases,” one of our anonymous survey respondents wrote at the time.

Overall, NREI survey respondents rated WeWork’s business model viability at an average of 6.18 percent on a scale of 1 to 10, with 10 being the most viable. Only slightly more than 12 percent believed WeWork would become profitable in the ensuing 24 months and a majority (59.3 percent) said that the company was expanding way too quickly. Most also felt WeWork would face challenges in the event of a downturn in the office sector.

Now, SoftBank is expected to concentrate on WeWork’s most profitable locations and shut down others, which could leave some landlords out in the cold and flood markets with vacant space, ultimately reducing rents, says Pascale. This could include properties in high-profile markets including New York City and London, where WeWork occupies 7.2 million sq. ft. and 3.7 million sq. ft. of office space, respectively, according to data from CBRE Group Inc. and Savills Plc.

WeWork established special LLC entities, which structured many leases so it could simply walk away from the properties by collapsing the entity and stiffing landlords, many of which provided WeWork incentives, including free rent and significant tenant improvement allowances based on long-term leases. For example, WeWork wanted a London landlord to provide 15 months of free rent on an eight-year lease and £100 ($123) per sq. ft. in TIs, the landlord negotiating the lease told the Guardian. This lack of guarantees was the reason some REITs reportedly refused to lease their spaces to WeWork in recent years.

Landlords holding leases signed by an LLC would have very little recourse to recoup the money spent on those incentives, as these leases are not guaranteed by the holding company, The We Company, says Pascale. Those spaces may need to be backfilled at a reduced rate, he notes.

Softbank is capitalizing the guarantor, The We Company, so landlords with leases guaranteed by the holding company are not in jeopardy, according to attorney Andrew Kirsh, a founding partner and co-chair of Sklar Kirsh. “The only leases in trouble are those entered under special-purpose entities, which were not guaranteed by WeWork Companies Inc. (the old holding company),” he says, noting that WeWork controlled a lot of office space in certain markets, so there is concern by landlords in these markets, whose only consolation may be they’re not alone in this situation.

In addition, Trepp LLC estimates that WeWork serves as a major tenant in office buildings backed by more than $3.8 billion in CMBS loans. Some of those assets are located in primary markets like New York and San Francisco, where WeWork is least likely to shed space. But others are in places like Overland Park, Kan., which are much more likely to experience disruptions in office demand, especially if a downturn hits.

WeWork was attractive to landlords because it had a brand, and cool, sexy presence, Kirsh notes. Markets where WeWork controlled a lot of space might be flooded with vacancies, bringing down rents, he adds.  As a result, Kirsh suggests that other co-working companies that have not overextended themselves, as well as current WeWork tenants, may be able to pick up real estate vacated by WeWork at a good price.

Meanwhile, WeWork may also put the former flagship Lord & Taylor building at 424 Fifth Ave. in New York City on the market. The co-working operator purchased the property to house its global headquarters last year for $850 million, a price that raised some eyebrows in the commercial real estate industry. According to reports, WeWork has been trying to lease the 660,000-sq.-ft. property to high-paying office tenants to raise more cash.