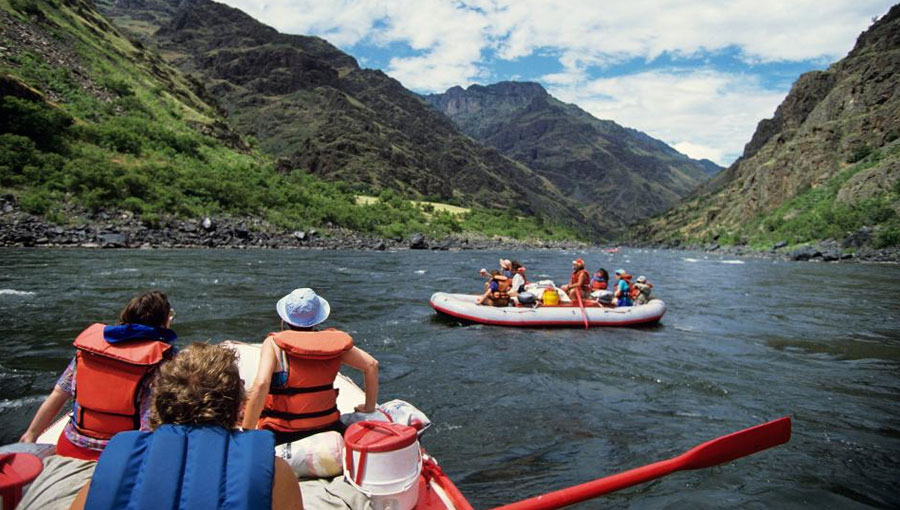 A new study by Atlas Van Lines that tracked migration patterns throughout the country in 2019 found more Americans are moving to Idaho than any other state. The Gem State continued a pattern of drawing new residents, ranking as the survey’s inbound leader for the second time since 2017. On the other hand, more people are looking to escape from New York, the nation’s outbound move leader last year, a designation the Empire State also held in 2014.

The $1.9 trillion Texas economy is the second biggest in the U.S., behind only California. Texas ranks fourth for current economic climate and first for its growth prospects, thanks to strong employment and income growth forecasts for the next five years. In addition, there are over 100 of the 1,000 largest public and private companies in the U.S. based in Texas, including giants like AT&T, ExxonMobil and Dell. Entrepreneurial activity ranks fourth in the nation, per the Kauffman Foundation. One of the only things holding Texas back is the education rate among its labor supply.

The District of Columbia, located on the north bank of the Potomac River, is the capital city of United States. The centers of all three branches of the U.S. federal government are located in the city, as are many of the nation’s monuments and museums. Washington, D.C. hosts 176 foreign embassies as well as the headquarters of the World Bank, the International Monetary Fund (IMF) and the Pan American Health Organization (PAHO) among other international organizations. The headquarters of other institutions such as national trade unions, lobbying groups, and professional associations are also located in the District.

The largest employer in the state is the U.S. Army base of Redstone Arsenal near Huntsville, Ala. With dozens of suppliers setting up facilities in Alabama, including Honda Motor, Hyundai Motor, Mercedes-Benz and Toyota Motor, the state has become a hub for automotive activity over the last two decades. Business tax costs are 18% below the national average in Alabama, according to Moody’s Analytics.

The Grand Canyon State’s job and economic growth forecasts over the next five years are among the best in the U.S. Population growth through 2023 is expected to be the third fastest in the country, as employment growth is expected to be almost as strong. People gravitate towards Arizona for its warm weather and business-friendly climate. The percent of union workers rates among the lowest in the U.S.

Rhode Island had a net migration out of the state every year since 2005 through 2017. After a brief reprieve, the trend is expected to continue in the future. The state has the lowest rate of new entrepreneurs in the country. Rhode Island had been stuck in the bottom ten overall of Forbes Best States for Business for 14 straight years, but has been moving up in recent years thanks to improved scores for its labor supply and economic outlook. Another plus: a high percentage of millennials relative to other New England states who can act as cheap, trainable labor.

Tennessee broke into the top ten in Forbes’ Best States for Business ranking for the first time thanks to a low cost of doing business and a pro-business regulatory climate, as well as a top Aaa rating from Moody’s on its general obligation debt. The state’s fiscal health rates among the best of all states, according to the Mercatus Center. Major industries include agriculture, manufacturing and tourism. The Great Smoky Mountains National Park, located in the eastern part of the state, is among the nation’s most visited national parks.

Oil and gas production, tourism and the federal government drive New Mexico’s economy. Federal technology labs, Los Alamos National Laboratory and Sandia National Laboratories, are two of the largest employers in the state. New Mexico ranks in the bottom six overall for a seventh straight year due in part to a weak labor supply. Income and job growth have been anemic over the past five years. The state also fares poorly on quality of life metrics, a product of comparatively low school test scores and high crime.

North Carolina ranks as FORBES’ Best State for Business for the third straight year (2017 was its first time on top). With one of the highest net migration rates in the U.S., people have been flocking to North Carolina for the past decade. The state has the smallest union workforce in the U.S. in terms of percent of total employment. The resulting benefit is labor costs that are 8% below the national average—sixth lowest in the country.

A cradle for innovation, Washington is the birthplace for a spectrum of iconic companies, including Microsoft, Amazon.com, Nordstrom, Starbucks, Boeing and Costco. Venture capitalists are always searching for the next great Washington company, pouring $2 billion of VC money—fifth-most in the U.S.—into the state between 2018 and 2019. The state has the second lowest energy costs in the U.S. at 24% below the national average per Moody’s Analytics. Though Washington does not collect personal or corporate income taxes, the business and occupation tax (B & O) affects most businesses.

Idaho broke into the top ten on the Best States rankings for the first time in over a decade this year thanks to strong growth prospects. Moody’s expects its $81 billion economy to grow an average of 3.5% for the next five years, more than any other state. Major industries include food processing, lumber/wood products, chemicals, paper, mining and tourism. The state produces nearly one-third of the potatoes grown in the U.S. One of the biggest sectors is science and technology led by semiconductor maker Micron Technology.

Income inequality is huge in Connecticut, with the disparity most pronounced when comparing southern towns like New Canaan and Greenwich with Hartford, the state’s capital. Business costs are 10% higher than the national average, due in part to energy costs that are 62% higher. The Nutmeg State rates fifth overall in quality of life thanks to low crime and poverty rates, a healthy populous and strong schools. But the regulatory climate and fiscal health rank among the worst in the nation.

Moody’s has bestowed Indiana with its top Aaa rating on its debt since 2010 and the state has a very friendly business climate from a regulatory standpoint. The Hoosier State made news in 2012 after becoming the 23rd right-to-work state in the U.S. Another plus: the cost of living is 5% below the national average. Indianapolis-based pharmaceutical giant, Eli Lilly, is the state’s largest private employer.

Nebraska drops from the top five states in Forbes’ Best States for Business ranking for the first time since 2014. It still has low business costs and business-friendly regulatory climate. Its growth prospects have shrunk, however, with low expectations for job growth as more businesses contract than expand. Lincoln is the state capital, but Omaha stands as Nebraska’s largest city and economic center. Omaha is home to Berkshire Hathaway, whose CEO and founder, Warren Buffett, is the fourth richest person in the world.

Delaware’s economic outlook has improved over the past 12 months, helping to push its overall rank up five spots this year in Forbes’ Best States for Business. More than 50% of U.S. publicly traded companies are incorporated in Delaware because of its business-friendly corporate law. The state’s economic and industrial development is closely tied to the Du Pont family, which founded EI du Pont de Nemours, one of the world’s largest chemical companies.

New Jersey’s economy is centered on pharmaceuticals, financial services, telecommunications, food processing and tourism. It also benefits as bedroom communities for both Philadelphia and New York. Though business and living costs are among the nation’s highest, New Jersey compensates by having one of the most educated labor forces. New Jersey scores poorly for its regulatory climate and fiscal health. Only Illinois has a worse rating on its general obligation debt than New Jersey’s A3.

Lower energy prices and an expected trade slowdown are having an impact on Louisiana. The Port of South Louisiana is the largest tonnage port district in the Western Hemisphere and the strong dollar is making goods coming from the U.S. more expensive. The employment outlook is weak. Louisiana also fares poorly in the quality of life category, a reflection of its high crime, low test scores for kids and poor showing health rankings. One plus: business costs are 9% below the U.S. average.

Illinois is home to more than 70 of the 1,000 biggest companies in the U.S. by revenue—fourth most among states. They include Boeing, Abbott Labs, Caterpillar and Kraft Foods. However, the net migration rate out of the state remains high and projected population growth is negative. The state’s finances are also in shambles: since June 2017, Moody’s has rated Illinois’ credit Baa3—lowest in the country among the states. “”After eight downgrades in as many years, Illinois’ rating is an outlier among states, most of which are rated at least eight notches higher,”” according to the report. It is the lowest rating ever for a U.S. state.

South Dakota’s business costs are the lowest in the country at 15% below the national average. Retail, finance, and healthcare make up the primary service industries in the state. In 1981, Citi established significant operations in South Dakota in order to take advantage of its favorable banking regulations; the bank employs more than 3,000 people today in the state. South Dakota’s $3.3 trillion in bank assets are among the most of any state and represent nearly one-fifth of all bank assets in the U.S.

After three straight last place finishes, West Virginia moved up one spot in Forbes’ Best States for Business in 2018. Population growth has been anemic—worst in the U.S.—and the state’s college attainment rate is the lowest in the country, with only 20% of its population over the age of 25 possessing a degree. The state’s legal climate ranks among the worst when measuring business friendliness, according to the Institute for Legal Reform. West Virginia is the second largest coal-producing state in the U.S. after Wyoming.

New York City dominates the economy of the state as the leading center of advertising, banking, finance, media and publishing in the U.S. If New York were a country, the state’s $1.7 trillion-dollar economy would be the 11th largest in the world just above Canada. The business climate of the state, however, is one of extremes. New York’s taxes, union workforce and red tape are among the highest in the country. On the plus side: the Empire state is an economic force comprised of an educated labor pool, huge VC investment, significant cultural and recreation resources and the headquarters of 10% of the 1,000 largest companies in the U.S.