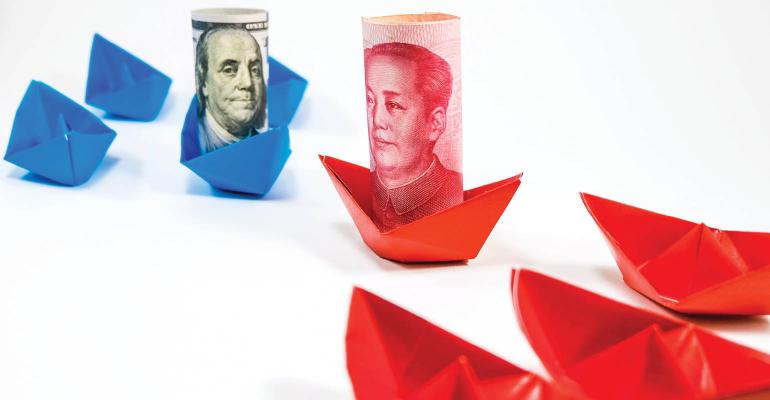 The U.S. trade war with China is casting a cloud of uncertainty over the U.S and global economies, but it is having a positive impact on industrial real estate on both sides of the U.S./Mexico border.

According to ATISA Industrial, a Tijuana-based industrial real estate developer, some U.S. manufacturers operating out of China are seeking relief from tariffs in Mexico, as the cost of labor and other operational expenses are similar to China, and transportation costs considerably less than moving products from China to U.S. markets. Additionally, in Mexico, which has its own patent system and respects that of other nations, there is threat around intellectual property theft, notes John Galaxidas, managing principal at the San Diego-based brokerage firm Synergy Real Estate Group.

For example, China-based Fuling Global Inc., which makes plasticware for restaurants, recently opened a new facility in Monterrey, Mexico and Texas-based Taskmaster Components, which produces tires and wheel assembly parts in China, has plans to build a factory in Mexico.

Jorge Martin, principal at real estate brokerage firm Martin & Associates, which has offices on both sides of the Southern California border, is currently working with Chinese clients seeking space in Tijuana. He notes that Chinese manufacturers are getting around the higher Chinese tariffs by partially manufacturing products in China and importing them to Mexico for completion and assembly to qualify for tariffs under NAFTA, before importing completed products to U.S. markets.

The shift in production geography and increasing demand for warehouse space are adding stress to already tight industrial markets on both sides of the Southern California/Mexico border.

The trade war has also intensified the shortage of warehouse space both sides of the border. Importers have stockpiled products before tariffs went into effect, according to Stephen Cheung, president of the World Trade Center Los Angeles and executive vice president of the Los Angeles Economic Development Corp.

Apparently, some of those goods are ending up in Tijuana warehouses. Importers are using warehouse space in Mexico to store products, due to both a lack of available space and increasing cost of warehousing products in California markets, then repatriating them through the ports of Los Angeles, Long Beach or Oakland for distribution throughout the state, notes Martin.

The high demand for space and the promise of increased near-shoring activity is also spurring industrial development on both sides of the border.

The Otay II project is aimed at reducing the high volume of commercial vehicles moving through Otay I, the busiest international border crossing in the U.S., and is part of a CALTRANS-SANDAG infrastructure project that will connect three freeways (SR11, SR905 and SR125 toll road) and includes extension for SR11 to the OTAY II POE. The Otay I POE averages 2,850 truck crossings a day, or nearly two trucks every minute, according to federal statistics. In 2016, goods valued at more than $41.8 billion crossed the border through Otay Mesa, reported federal agencies.

Completion of Phase I improvements at Otay Crossings are planned to coincide with the opening of Otay II in 2022.

ATISA Industrial, a Tijuana-based real estate company, is also developing an industrial project in Calexico, Calif., on the U.S. side of the border near Mexicali, according to Galaxadias.  “A Mexican developer developing in California is a first,” he says.

Cheung, however, isn’t so sure significant re-shoring activity will materialize. He notes that Trump’s dispute with Mexico over the border wall and refugees from Central America have created uncertainty around near-shoring in Mexico, and it’s unclear in the current political climate whether Democrats or Republicans would support a new NAFTA agreement.

Any way you look at it, “the trade war isn’t good for business,” he notes, adding that it will have a devastating impact on the Southern California economy. Cheung explains Approximately $430 billion in goods moved through the ports of Los Angeles and Long Beach last year, of which nearly half—$170 billion—involved trade with China, Cheung says. While the trade war created a temporary surge in demand for warehouse space, container volumes at the two ports dipped 6 percent over the last six months, he notes.