Fourth Quarter Prospects Improve, But Household Debt Is Piling Up 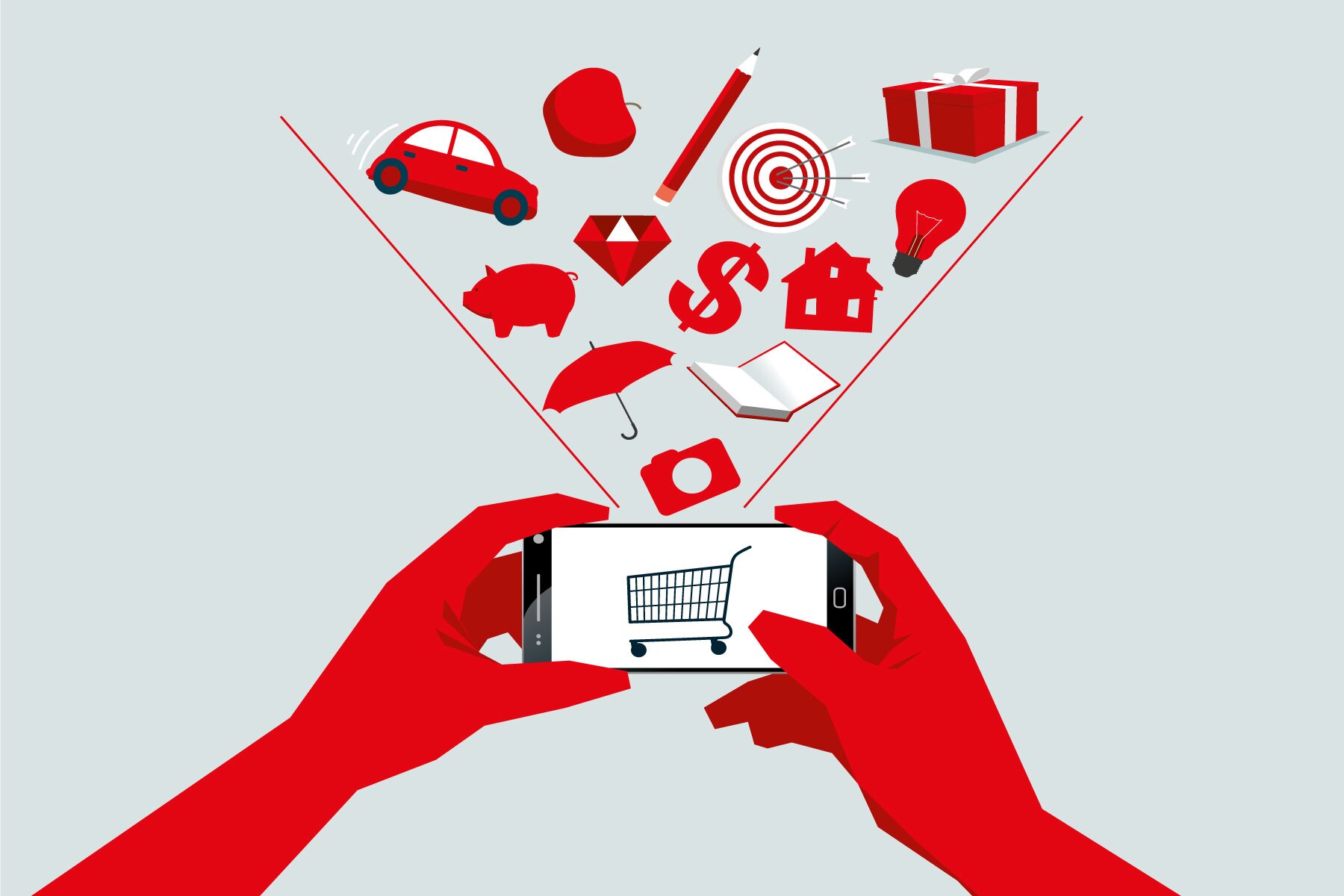 With fears of the economy falling into recession seemingly everywhere as the Federal Reserve hikes interest rates, consumers appear to be resorting to some retail therapy.

Retail sales rose by 1.3% in October and were 8.3% higher than last year’s levels, according to the Census Bureau’s report on retail trade and food sales. Inflation played a large role in the increase, clearly, as the consumer price index (CPI) rose by 7.7% over the year in October. But even after accounting for rising prices (which we estimate by applying product-specific price data to each category of sales), real retail sales still grew an impressive 0.9% during the month.

Consumer spending drives about two-thirds of the economy, so good news such as this is a sign that the economy should do better in the fourth quarter than has been expected. 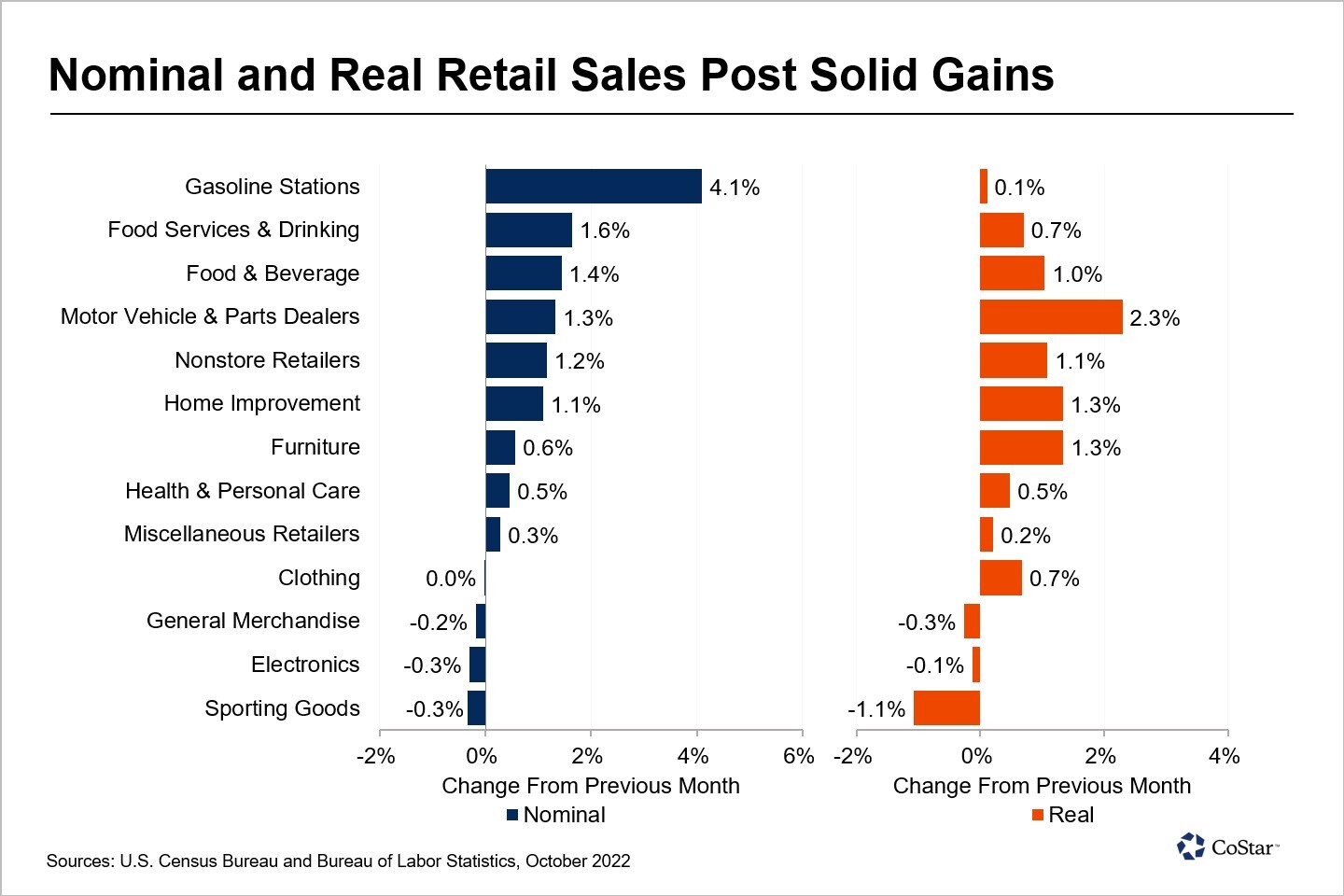 Shoppers in October became more willing to buy big-ticket items — which suggests they hold at least some confidence in their ability to finance such items, either through wages or through credit.

Real sales grew by 1.3% at both furniture and home improvement stores. But at the same time, the residential real estate market is stalling with fewer home sales and rising apartment vacancies. This means that household formation is declining, so we should expect to see fewer people shopping specifically at these stores, not more.

Other big-ticket products include vehicles. Pent-up demand for automobiles during the pandemic continues to drive sales at car dealerships, which grew in inflation-adjusted terms by 2.3% in October. Major policy changes have begun to impact the electric vehicle market, whose market share has been growing rapidly. As a result of the Inflation Reduction Act, which was signed into law in August, the previous cap on tax credits by manufacturer was immediately removed, making electric vehicles produced by Tesla, General Motors, and Toyota once again eligible for the full $7,500 tax credit. Other provisions of the law, such as requirements for domestic production, won’t begin until 2024, but this segment of the auto industry will likely continue to propel sales through 2023.

Yet rising prices for more frequently purchased items is weighing on many consumers. This is evident at gasoline stations, where sales rose by 4.1% in October, almost identical to the increase in the gasoline price index, which grew by 4%.

The post-pandemic rush to go out for a meal or a drink may also be waning. While spending at bars and restaurants grew by 1.6% in October, in inflation-adjusted terms this grew by only a modest 0.7%. We might have hoped for holiday gatherings to bolster this category with fewer concerns over COVID, but hospitals are voicing loud concerns over the recent spread of all types of respiratory illnesses.

It may take a holiday miracle for retail sales to post gains similar to those seen in October for the rest of the year because consumer sentiment has fallen off a cliff. The University of Michigan’s consumer sentiment index fell by 8.7% in November, with consumers showing greater concern of the immediate future. The index of current economic conditions fell by 11.9% while the index of expectations of future conditions fell by 6.2%. 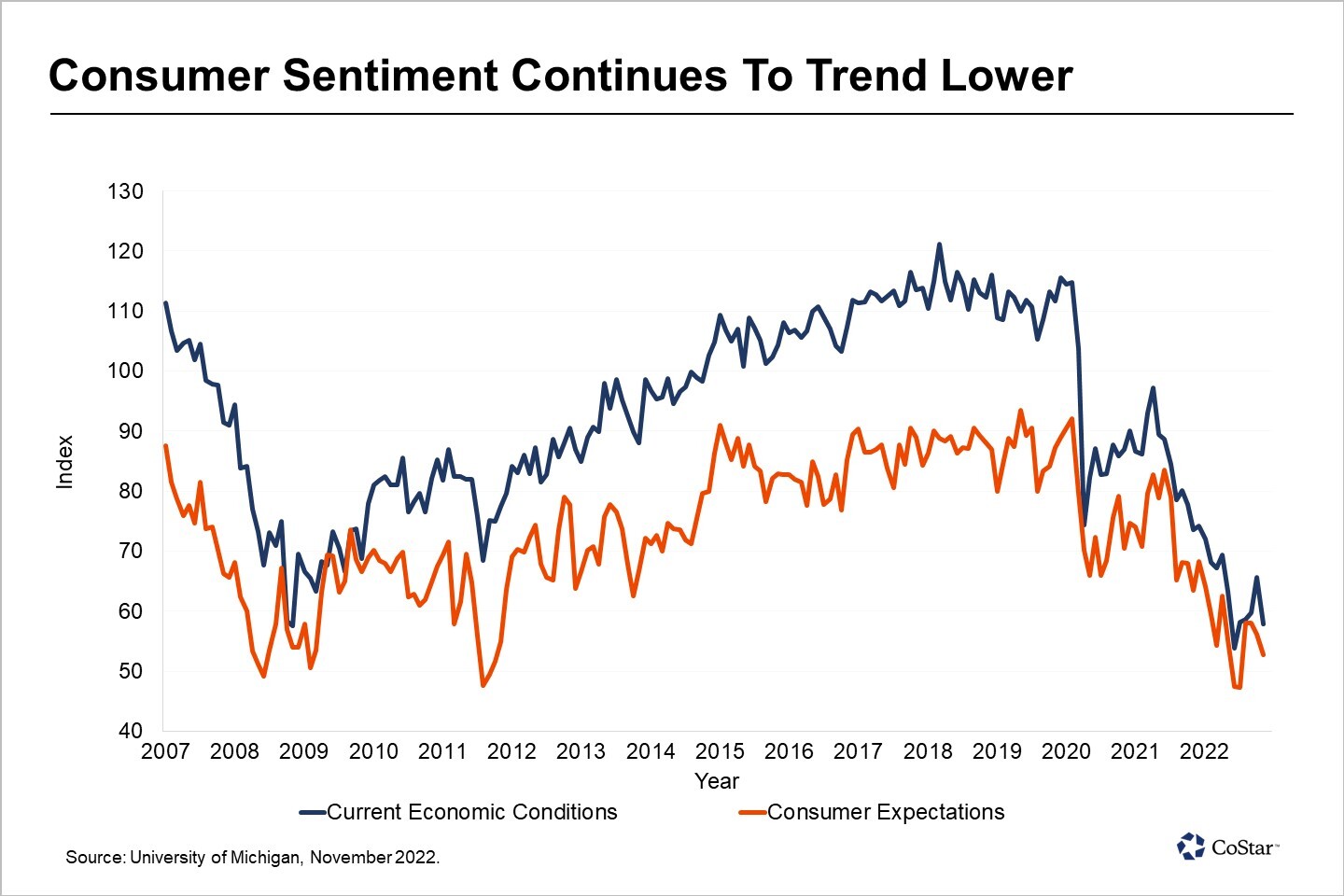 With spending continuing to be strong despite a rundown of excess savings accumulated during the pandemic, consumers are turning to other sources of financing and, as a result, household debt is piling up.

The Federal Reserve Bank of New York reports that household debt grew by 8.3% year-over-year in the third quarter of 2022 — the fastest pace of growth since the first quarter of 2008. While most household debt is in mortgages, credit card debt grew by a whopping 15% over the year. This type of debt is most worrisome because credit cards carry variable interest rates. While household debt burdens remain among the lowest since the 1980s, that recipe is changing as rates rise, triggering a risk that the healthy consumer sector will finally run out of steam. 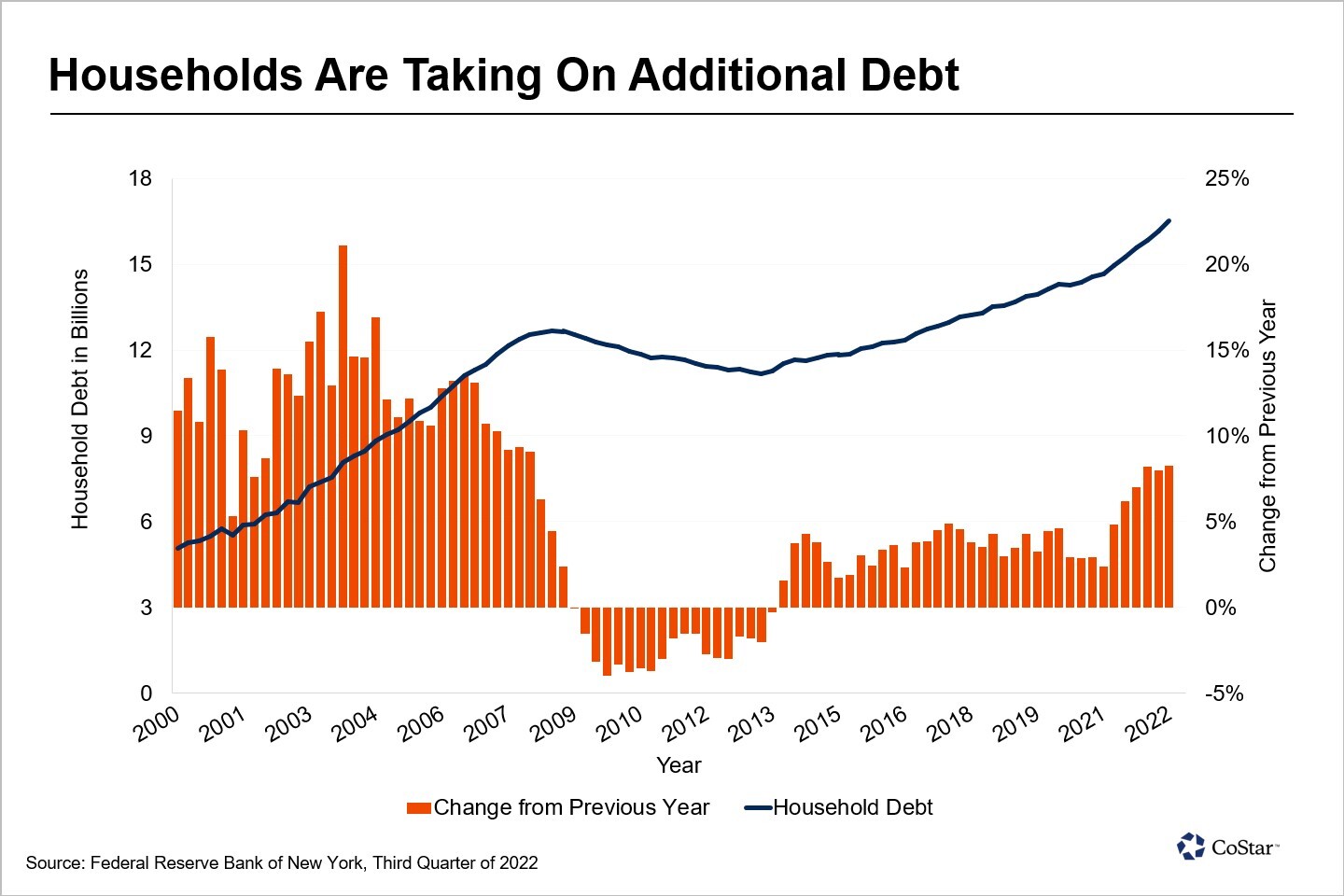 As consumers prop up the economy by continuing to spend, retailers are in no hurry to lower prices that would trim their margins. This is making the Federal Reserve’s fight against inflation more difficult to conduct. With the latest consumer price index and producer price index reports coming in below forecasts, Wall Street is expecting that further policy rate hikes will be smaller than the 75 basis point raises made at the past four meetings of the Fed’s policy-making committee.

We’ll have to see more pain in the labor market for that to be a solid bet, though — not really something we’d want to celebrate during a holiday season.