The company that produces White Claw Hard Seltzer and Mike’s Hard Lemonade tapped Glendale, Arizona, for its new $250 million brewery and distribution center and expects to fast-track the opening of the facility to less than seven months to keep up with the national thirst for the popular alcoholic beverages.

The 916,000-square-foot Mark Anthony Brewing Inc. brewery and distribution center, slated to open in June near North Reems Road between West Peoria and West Olive avenues, is the second major beverage maker to build a major industrial project in Glendale, where the completion of Loop 303 in 2017 has spurred population growth and business and construction activity.

A boom in the popularity of White Claw coincides with a decline in U.S. wine consumption for the first time in 25 years in 2019 as wine loses favor with frugal millennials and retiring baby boomers. At the same time, the $8 billion “ready-to-drink” alcoholic beverage market has exploded in popularity, with consumption increasing nearly 50% last year, driven by brands like White Claw, Truly and other hard seltzers, according to a new report by IWSR Drinks Market Analysis.

John Sacksteder, president of Chicago-based Mark Anthony Brewing, credited the efforts of the city, Arizona Gov. Doug Ducey and state business officials for providing “the support required for our rapid build-out and aggressive timeline” for the project, which is expected to created more than 200 jobs.

“We expect progress to be visible almost weekly given their ambitious timeline,” German said.

Glendale City Manager Kevin Phelps acknowledged the aggressive construction schedule for a type of project that can take a year or longer to complete.

“Our development team has been working closely with Mark Anthony Brewing and have a plan in place to ensure we meet their timeline,” Phelps said. 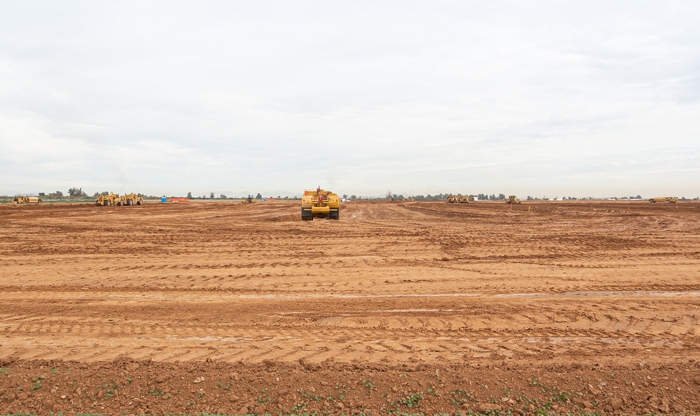 IWSR, which gathers data on the global alcoholic beverage market, forecasts that hard seltzer consumption will triple by 2023. White Claw expects sales of about $4 billion this year and already controls 52% of hard seltzer sales, less than four years after launching in 2016, according to IWSR and Mark Anthony data.

Hard seltzer is “easy to drink and appeals to all age groups and is gender neutral,” and it’s also perceived as healthier than beer, with lower sugar content and fewer calories, IWSR spokeswoman Brandy Rand said.

A nationwide White Claw shortage last year received national publicity and spread quickly across social media. Mark Anthony Brewing confirmed the shortage in October and said it was “working around the clock to increase supply given the rapid growth in consumer demand.”

Large corporations requiring modern logistics operations like XPO Logistics, Conair, Dick’s Sporting Goods and REI have completed millions of square feet of construction in Glendale over the past few years and more projects in the pipeline, according to CoStar Analytics.

Red Bull, in collaboration with Ball Corp. and Rauch Fruit Juices, will open a 700,000-square-foot canning facility just north of the White Claw site in early 2021, creating an estimated 140 jobs.