End of the story, right? Not at all. Since bottoming in August, lumber has gone on another run that’s starting to look a lot like the historic run we saw last spring. As of Friday, the cash market price is back up to $1,111 per thousand board feet. That’s up 186% (or almost triple) above its bottom price in August.

But the dynamics pushing up prices are very different this time. During the last go around, pandemic lockdowns had limited production just as remote working set off a home renovation boom and recession-induced low mortgage rates spurred more demand for homebuilding. Instead of lockdowns, blame mother nature this time. The bad wildfire season this summer in the U.S. Pacific Northwest and British Columbia—the epicenters of North American softwood production—saw some sawmills curtail production. Meanwhile, mudslides and flooding caused by a record rainfall in November have delayed lumber shipments coming out of the Port of Vancouver. That supply decline is simply outmatched by high demand from builders who are still selling homes faster than they can build them.

As prices started to spike late last year, suppliers and homebuilders responded by increasing their lumber orders. Stinson Dean, CEO of Deacon Lumber, a lumber trading company, tells Fortune those buyers didn’t want to get caught off-guard like last time so they bought ahead “just in case” prices climbed back to the exorbitant levels of spring 2021. Of course, that influx of buyers only put more upward pressure on prices. 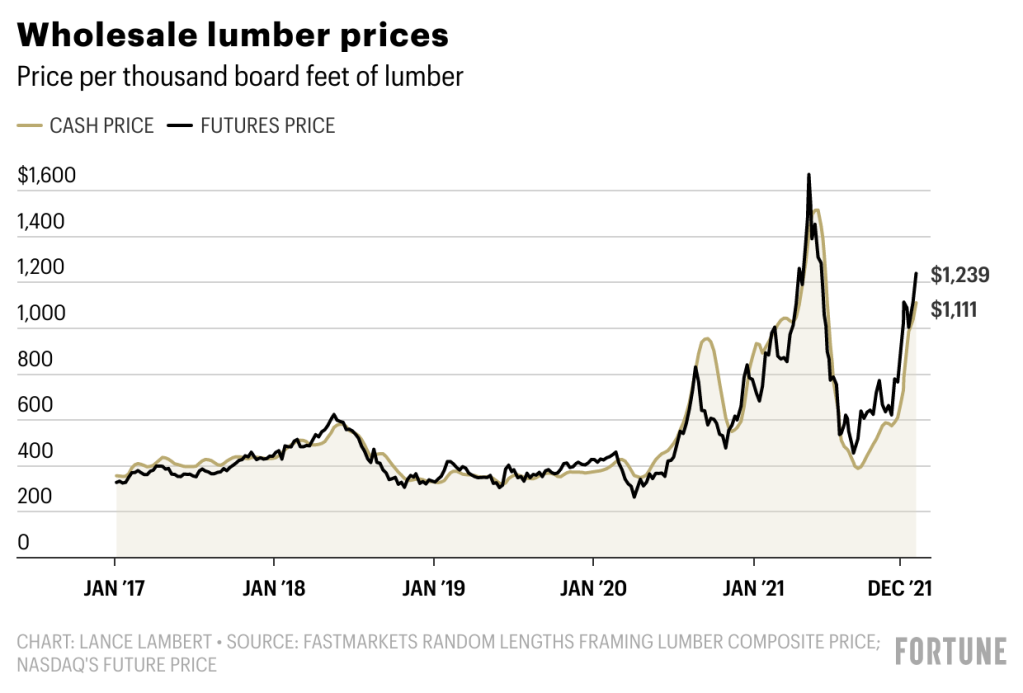 “Demand is phenomenal. We have been inundated with job quotes for the last two months, and have booked record amounts of future business. Buyers don’t want to get caught flat-footed and have the market run away from them like happened a year ago,” says Michael Goodman, director of specialty products at Sherwood Lumber.

Where do we go from here? Industry insiders don’t foresee lumber over $1,000 per thousand board feet as the new normal. Inevitably, sawmills will chase profits and increase production. But it’s tough to say when prices will fall again.

“Ultimately the frenzy will subside likely later in the first quarter or early in the second quarter, and we will start to see headwinds like higher interest rates,” Goodman says. Of course, higher interest rates and mortgage rates, which are expected to rise this year, could slow the housing market and building.

But don’t expect cheap lumber anytime soon. Even if lumber prices pull back somewhat, it doesn’t mean we’re headed back to pre-pandemic levels. There is a shortage of around 4 million homes—a dynamic that is likely going to keep builders busy (aka buying more lumber) for years to come.